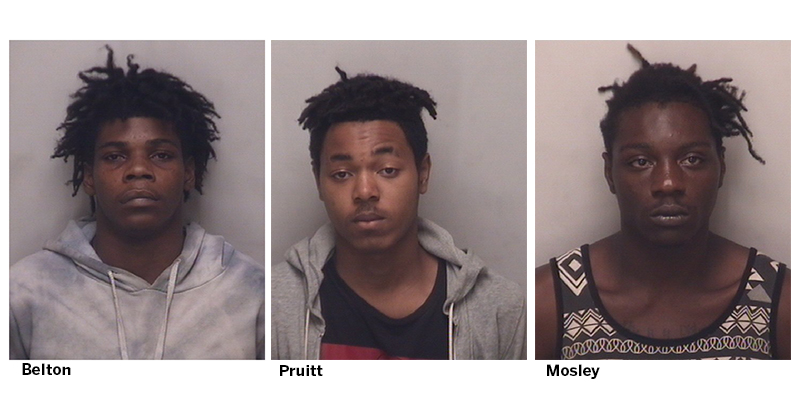 SALISBURY — Two men were arrested Friday in connection with the murder of 71-year-old Emerson Truitt Roebuck, according to the Salisbury Police Department.

Roebuck was fatally shot Oct. 19 in his home on West Kerr Street.

Ronald Dashawn Pruitt, 17, of Salisbury, and Kenyatta Raphalle Belton Jr., 16, of Salisbury, were each charged with first-degree murder and robbery with a dangerous weapon. Both men are being held in the Rowan County Detention Center under no bond. They were arrested at Belton’s residence on Harrison Road

Police are looking for a third person in connection with Roebuck’s death — Tai Alexander Mosley, 21, of Salisbury. Police say Mosley also is wanted on charges of murder and robbery.

Police told the Post in October that Roebuck was discovered shot by his roommate, who heard the gunshots and found Roebuck in the living room. Roebuck was taken to Novant Health Rowan Medical Center, where he died.

Salisbury Police Department spokesman Lt. Greg Beam said Friday night the crime was not random and that the suspects entered Roebuck’s residence with the intent to rob him.

While Roebuck had been the victim of a home invasion earlier in October involving three males, Beam said that incident was not related to his death.

The police is asking for the public’s help to locate Mosley. Anyone with information about his whereabouts should call 911, the Salisbury Police Department at 704-638-5333 or Salisbury-Rowan CrimeStoppers at 866-639-5245.