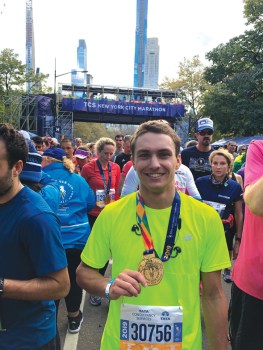 David Derrick, Salisbury resident and UNCW student, at the finish of the NYC Marathon. Submitted photo. 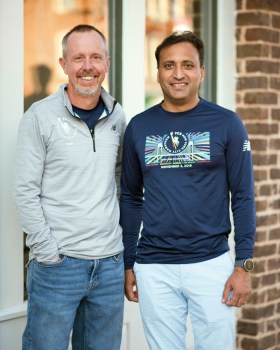 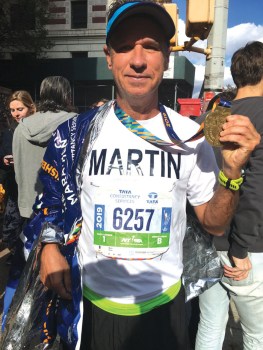 SALISBURY — Craige Farmer manages Rowan County’s Ellis Park and has been running for almost four years. In that time, he has done six marathons, but none was particularly satisfying. Farmer wanted a memorable experience at the New York City Marathon and got one.

“I wanted to soak in the massive start on the Verrazano Bridge,” Craige said. “The police and Coast Guard helicopters hovered right beside us. I knew I was doing something special.”

A recent cross country runner at Salisbury High School, David Derrick is 22 and a junior at the University of North Carolina at Wilmington majoring in environmental science with a minor in statistics.

“Freshman year of college came around and I decided that running would be a good way to stay in shape, although I didn’t expect long distance running,” Derrick said. “After a few weeks, I needed a goal and signed up for a half marathon. Then two marathons. I was hooked and wanted to find bigger races to run. I threw my name in the lottery for the New York City Marathon. I believe there were about 117,000 names in the lottery, so when I got the congratulatory email saying I got in, I was beyond excited.”

A Salisbury business owner, Sonny Ali has been running for 10 years and got serious about it in the past eight years with six marathons.

Now a resident of Jamestown, Martin Thorne lived in Salisbury when he ran the New York marathon. He’s been running for 10 years, beating 3 hours at the Boston Marathon. With 14 total marathons, 24 ultra marathons and six 100-mile races, he is a serious runner.

“New York is one of the majors in the U.S., and I grew up watching it on TV,” Thorne said. “It is the most famous marathon in the world.”

The New York City Marathon is also the largest in the world, and this was the 49th annual run. The marathon that started with a few entrants making loops in Central Park had more than 53,000 finishers this year. The race was televised worldwide and had entrants from 125 countries.

Race day was Nov. 3, which had perfect conditions with temperatures in the low 40s and light wind.

All the local runners were excited by the experience.

“Bands every few miles and a massive gospel choir were amazing, as well as the huge crowd of spectators that kept me pumped up,” Farmer said. “Running New York was incredible.”

“The crowds were outstanding with people of all ages coming out to cheer us on as we took on the five boroughs,” said Derrick. “The bridges we crossed were very silent with only the steps of runners being audible, but once we exited the bridges, loud cheering quickly filled the air as we kept running by. I was told New York is a hard course due to the sheer size of the running field, but I personally like lots of runners and spectators.”

“The crowds in New York were unbelievable,” he said. “Every leg of the marathon had thousands of people cheering us on. It was really a runner’s high to compete in that environment of excitement and enthusiasm. Running through the streets with skyscrapers all around and all five boroughs was an exciting experience for me.”

“The course was much wider and had more room for runners than at Boston,” said Thorne. “It was well-coordinated, especially with the four starting villages. Each neighborhood had its own personality. The crowds were so loud and many people deep. I wore my name on my shirt, so I had at least 1,000 spectators scream my name as I ran by. Central Park is a great finishing area.”

In an unusual twist, Derrick caught the Amtrak train in Cary on Friday morning and rode with his mother, brother and grandparents to New York, arriving about 9 p.m.

“The train was very nice in terms of being able to get up and move around, which is very beneficial both before and after a marathon when your muscles are feeling very stiff,” he said.

All the runners have plans for more runs. Farmer wants to get back into running local races, while Ali has plans for the London Marathon.

Thorne is headed for the Chicago Marathon next year, where he hopes to break 2:55, and he will continue competing in ultras.

Derrick also is looking ahead.

“This New York marathon will always be one of my favorites,” Derrick said. “I want to try Chicago because it also has a big atmosphere and Boston, too. I thoroughly enjoy the challenges of marathon running and cannot wait to see what the future holds. I plan to do at least one a year.”

Thorne, with the most running history, summed up the New York City experience as something to remember.

“It was my first trip to New York City, and I loved everything about it,” he said. “Everyone was very friendly and encouraging. New York City did not disappoint.”