The captain becomes a player as Tiger Woods picks himself 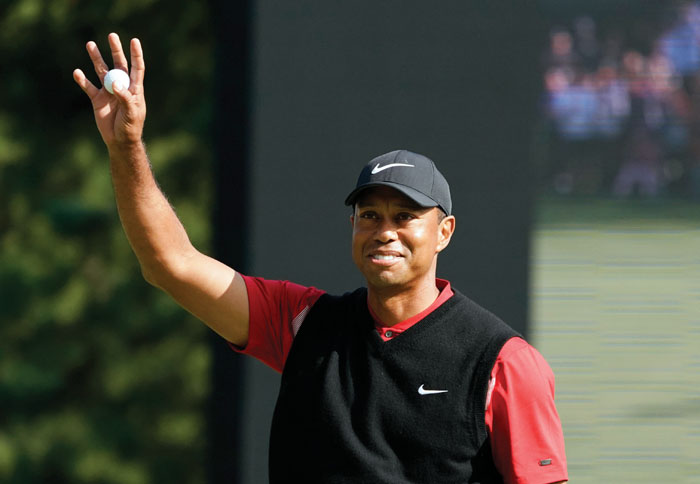 Tiger Woods will have an ear piece, a radio and his golf clubs at the Presidents Cup.

Woods created his own slice of history Thursday night by becoming the first Presidents Cup captain to use one of his wild-card selections on himself.

He is the second playing captain in the Presidents Cup. Hale Irwin played in the inaugural matches in 1994 when he qualified for the team. He had Paul Azinger, who was recovering from cancer, as one of his assistants.

Woods was introduced as captain in March 2018, when he was just returning from a fourth surgery on his lower back. He has won three times since then, including his 15th major when he won the Masters in April.

“It’s going to be a lot of work, but something I’ve been looking forward to for a long time,” Woods said.

The decision was hardly a surprise. Woods not only is the Masters champion, just two weeks ago he tied the PGA Tour record with his 82nd career victory at the Zozo Championship in Japan. Woods said it was that trip — not just the victory, but the travel — that convinced him he was fully healed from minor knee surgery in August and capable of contributing in Australia.

The Presidents Cup is Dec. 12-15 at Royal Melbourne.

Woods also selected Tony Finau, who finished just outside the top eight who qualified; U.S. Open champion Gary Woodland, who is playing on his first U.S. team; and Patrick Reed.

Missing from the American team is Phil Mickelson, who had played in every Presidents Cup since the matches began in 1994. Woods also left off Rickie Fowler, who got married and has not played since the Tour Championship; and Kevin Kisner, who is 16-5-3 in match play, including a victory and runner-up in the last two Dell Match Play events.

And still to be determined is whether PGA champion Brooks Koepka, the No. 1 player in the world, will be ready to go. Koepka had stem cell treatment in his left knee after the Tour Championship, and that injured the knee while bracing himself after he slipped on a wet piece of cement in the CJ Cup.

Woods said Koepka told him he was rehabbing the knee and that the focus now was on the 12 players who will try to win the Presidents Cup for the eighth straight time.

Woods did not say what kind of contingency plan he had if Koepka couldn’t make it. He also left open the option of adding an assistant captain now that he’ll be playing. He currently has Fred Couples, Steve Stricker and Zach Johnson.

Woods said those three had strong thoughts on him playing, especially Couples.

“Freddie was pretty ardent. ‘You’re on the team, quit being stupid.’ At the time, I haven’t even swung a club,” Woods said. “I got back to him after Japan.”

Everyone is required to play in at least one match ahead of the Sunday singles, meaning Woods only has to play twice. He said he could play more depending on what the team needs.

The rest of the U.S. team is Dustin Johnson, Xander Schauffele, Bryson DeChambeau, Justin Thomas, Matt Kuchar, Patrick Cantlay and Webb Simpson. Cantlay, Schauffele and Woodland are the only players who have never competed in a Presidents Cup or Ryder Cup.

Royal Melbourne is where the International team had its only victory in 1998. The Americans won in 2011 at Royal Melbourne with Woods — a captain’s pick — delivering the winning point.

Woods announced himself with his fourth and final pick.

“As captain, I’m going to choose Tiger Woods as the last player on the team,” he said. “He’s made … nine Cups and he’s played in Australia twice in the Presidents Cup, so this will be his third appearance as a player. And I find it interesting talking in the third person.”

Even more interesting will be his week in Australia — at times in a cart, at times standing over a key putt, all the while thinking about pairings and what it takes to win.

Els took a pair of 21-year-old rookies, Joaquin Niemann of Chile and Sungjae Im of South Korea, with two of his picks. That will give the International team six rookies as it tries to end a streak of seven straight losses to the Americans.

He also took Jason Day of Australia and Adam Hadwin of Canada. Day is playing the Presidents Cup for the fifth time, but first as a captain’s pick. Hadwin made his debut in 2017 at Liberty National, a loss so bad the Americans nearly clinched it before Sunday singles.

Els said he was not afraid to play anyone, and he had no plans to hide anyone by sitting them out.

U.S. captain Tiger Woods makes his four picks Thursday. Woods, the Masters champion who captured his 82nd career PGA Tour victory two weeks ago in Japan, is expected to pick himself. He would be the first playing-captain since Hale Irwin at the inaugural Presidents Cup in 1994.

The Presidents Cup is Dec. 12-15 at Royal Melbourne in Australia, where the International team of players from every continent but Europe won for the only time in 1998. The United States won the last time it was Royal Melbourne in 2011.

Els said he relied some on statistics, but he leaned just as heavily on a long run of good golf. Unlike the Ryder Cup, where the captain’s picks are decided two weeks before the matches, the Presidents Cup is still six weeks away.

Im was the PGA Tour rookie of the year last season, the only rookie to reach the Tour Championship. His only victory this year was at the Genesis Championship on the Korean Tour. Niemann, the first player from Chile to be in the Presidents Cup, earned his PGA Tour card the year he turned pro. He won at the Greenbrier last month for his first PGA Tour victory.

“We’re really going to lean on you,” Els told Niemann during a conference call.

Day was the obvious choice, even though he failed to win for the second time in the last three PGA Tour seasons and has dropped to No. 29 in the world ranking. Day is 1-7-2 in his last two Presidents Cup.

Hadwin has a pair of runner-up finishes this year, most recently in the Safeway Open.

“I’m hungry for a second shot,” said Hadwin, part of the International team what was soundly beaten at Liberty National in 2017.

“These guys are world-class players and they’ve proven themselves,” Els said. “Take age out of the equation. They’re got one hell of a big future in this event. I’m real excited by the new blood that’s coming in. It balances the team.”

The Presidents Cup has been a lopsided affair since it began in 1994, patterned after the Ryder Cup to give international players from outside Europe a chance to compete in a team event. The United States leads the series 10-1-1, with the tie coming in South Africa and Els and Woods tied a playoff match in darkness.

Maggert shot an 8-under 63 on Thursday in perfect conditions at Phoenix Country Club to take a one-stroke lead over Langer, with Miguel Angel Jimenez, Paul Goydos and Steve Flesch another shot back, and Kelly and Goosen at 66 with Lee Janzen and Scott Parel.

Maggert entered the season finale 34th in the standings, just three spots from failing to qualify.

“I have no idea what happened today,” Maggert said. “I liked the course last year, felt like I could play well here. To be honest, I got a new putter at the Ping factory on Monday and as soon as I saw it, I says, ‘Wow, this looks good, I think I can make some putts with this.’ Lo and behold, I made a lot of good putts today.”

Kelly needs a victory or help from McCarron to take the season title.

“I’m feeling pretty good right now,” Kelly said. “It’s just a matter of staying solid. I got a little tired at the end, things got a little loose and I’ve got to get stronger as the week goes on.”

“Means nothing right now,” McCarron said. “I don’t know if I’m leading or Jerry’s leading, doesn’t even matter. All I know is I’ve got to go out there and play a little bit better the next three days.”

McCarron has not won since June and has only two top 10s in his last six tournaments.

Coming off a playoff loss to Montgomerie on Sunday in California, Langer closed his bogey-free round with a birdie on the par-5 18th. Langer is third in the standings, putting the 62-year-old German star in position to win his sixth Charles Schwab Cup title — with help from McCarron and Kelly.

Montgomerie, fourth in the standings, had a 67.

Goosen, at fifth in the standings, is the last player with a chance to take the season title with a victory.