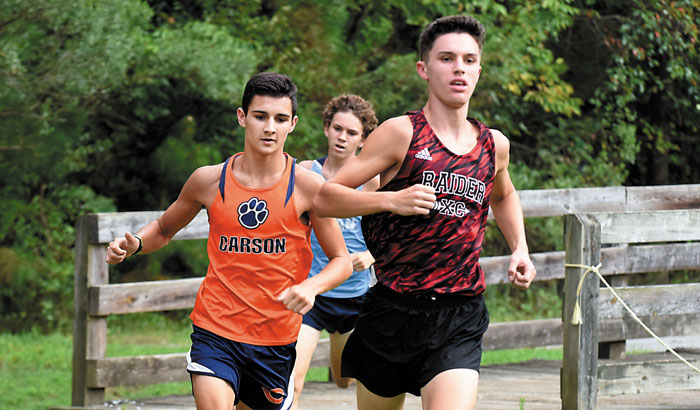 Noah Julian (South), right, finished third in the 2A cross country regionals in Dobson. South Rowan also qualified as a team for the state race. Also, Carson's Zac Barbee, left, qualified for the state 3A race, after taking 11th place in the regionals ... File photo by Wayne Hinshaw/for the Salisbury Post

Coach Scott Julian’s Raiders qualified as a team for the state championships for the first time in program history and will compete next week at Ivey Redmon Park in Kernersville.

Winston-Salem Atkins won the regional with a score of 56. The Camels were followed by four squads from the Central Carolina Conference — Oak Grove (123), South Rowan (129), Central Davidson (142) and East Davidson (162). Twenty-one squads had the minimum of five runners needed to post a team score. The top five teams advanced to the state meet.

In the girls race at Fisher River Park, South Rowan was 11th, while Salisbury was 13th.

CCC champ East Davidson led the team scoring and was the only CCC team in the top five. West Stanly was runner-up.

Webb missed making the state meet as an individual by 13 seconds. Brooklyn Lester of Surry Central ran 22:11 and got the last spot.

MORGANTON — Competing on the Freedom High course, the Carson girls also made history on Saturday morning, scoring 159 and qualifying their team for the state meet for the first time.

East Rowan senior Adalie Harrison, the Rowan County champ, ran 20:56 for 16th place and qualified for the state meet as an individual. The top seven individuals who weren’t on one of the qualifying teams advanced to the state event. East’s team finished 19th.

In the boys race in Morganton, Carson senior Zac Barbee placed 11th in 16:58 and grabbed one of the individual berths for the state meet next Saturday in Kernersville.

Sophomore Thomas Ferguson (40th, 17:56) was the standout for East Rowan.

Watauga senior Avery Cannon won in 16:00 and led the Pioneers to the team title.