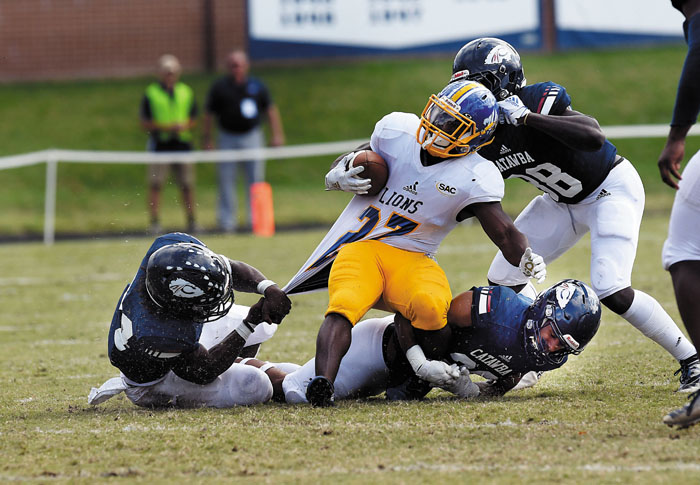 Catawba's LJ Melvin 34 and D'verik Daniel 38 tackle MH's Elijah Jett during last week's game. On Saturday at Tusculum, Melvin had two sacks and had a long return with a fumble recovery. ... File photo by Wayne Hinshaw/for the Salisbury Post

The Pioneers won their third straight game, improving to 4-5 overall and 3-3 in the SAC, while the Indians drop to 1-8 and 0-6. Catawba has lost seven straight games, since a win over Winston-Salem State on Sept. 14.

Tusculum used a rushing attack to control the clock, totaling 366 of its 478 yards on the ground. Running back Thurlow Wilkins led the way with 153 yards with Jordon Shippy adding 111 and Maurice Gomillion 83.

The Pioneers used two quarterbacks — Bryce Moore completed 4-of-8 passes for 64 yards and Joaquin Collazo went 3-for-8 for 58 yards.

Catawba QB Kaylon Wade threw a pair of touchdown passes, 15 yards to Dominic Burnam in the first quarter and 39 yards to Will Sheehan in the fourth. He was 11-for-28 in the air for 131 yards, but was intercepted three times.

Catawba’s defense forced four turnovers and produced seven sacks in the loss. The Indians caused turnovers on the first two Tusculum drives with Jeremiah Ferguson intercepting Moore at the Catawba 27 on the initial drive and LJ Melvin recovering a fumble on the second. Melvin scooped a fumble caused by John Oxce at the Catawba 19 and returned it to the Tusculum 20 to set up the game’s first score.

The Indians held Tusculum to a field goal on a long drive that bridged the opening quarters. The Pioneers had a first and goal at the one, but a sack by Ferguson on second down helped the Indians keep Tusculum out of the end zone.

The Pioneers finally went on top midway through the second quarter when Collazo connected with Tony Ponder for a 25-yard score. Robert Chery blocked a late Tusculum field goal attempt at the end of the half to keep the Tusculum lead at 10-7 at the break.

Catawba travels to UVa-Wise next week, for a first-time meeting with the Cavaliers at noon.