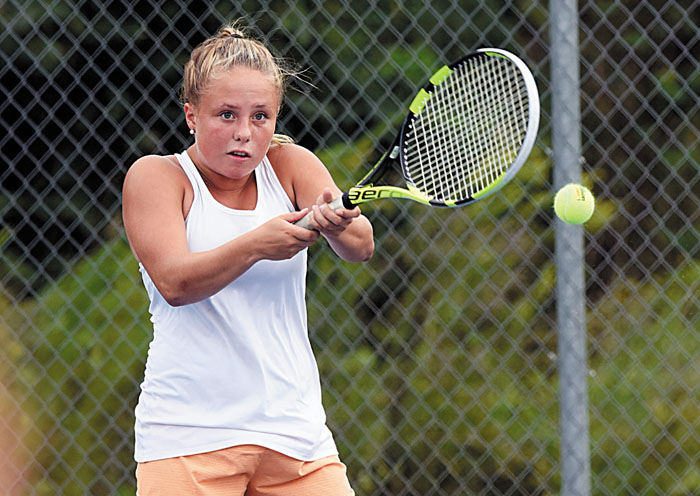 SALISBURY — The undefeated Salisbury Hornets advanced to the regional final in 2A dual team tennis by beating Oak Grove 5-0 on Monday afternoon at home.

The match at No. 4 singles went down as a draw. It wasn’t completed. Salisbury’s Abby Campion and Oak Grove’s Emma Steward had won a set apiece when the match was ended.

The Hornets, coached by Milton Griffith, won 6-3 when the teams squared off in mid-September in a match that took two days. The biggest turnaround in the rematch was at No. 3 singles. Thurman lost in the first meeting.

Salisbury breezed in its first two playoff matches against Burns and West Wilkes.

The next action for Salisbury comes quickly on Thursday. The Hornets will be taking on Lake Norman Charter or undefeated Hendersonville.

State championships will be determined Saturday.

The Cougars, who made it to the third round for the first time ever with wins against Southern Alamance and Concord, still aren’t done. They won 6-3 against Cox Mill on Monday, and they’re now in the Final Four in 3A.

Carson was able to win, 5-4, against the Chargers when the teams squared off in an early non-conference matchup back on Aug. 26, but Cox Mill’s top player Hannah Jiang wasn’t available for that match. Jiang is outstanding and was runner-up in the 3A state individual tournament held over the weekend.

Jiang won at No. 1 singles on Monday and teamed with Valentina Morales for a win at No. 1 doubles. But the only other victory for the Chargers (13-3) came at No. 5 singles, where Reilly Poe was a winner.

Maci Cooper had a huge straight-sets win at No. 2 singles against Morales, who was an individual state qualifier.

Carson’s Carleigh Perry and Jadyn Kirkpatrick prevailed in third-set tiebreakers at No. 3 and No. 4 singles.

The team of Kirkpatrick/Cooper won 8-2 at No. 2 doubles, while Isley/Keeley Watson picked up a point at No.3 doubles with an 8-3 victory.

Carson will play at Charlotte Catholic’s courts Tuesday at 3:30 p.m. in the regional final. Matches have been moved up due to the threat of rain.