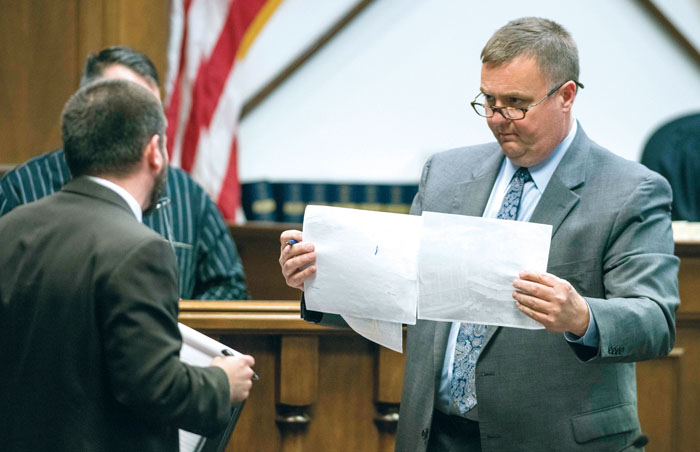 JON C. LAKEY / SALISBURY POST Defense attorney Darrin Jordan shows Asst. District Attorney Tim Gould the back of two pictures that he is going to show defendant Jeff Steen who was on the witness stand on Jan. 26, 2017.

The Office of Indigent Defense Services provides court-appointed representation to individuals who could otherwise not afford to hire an attorney in criminal cases and, to a limited degree, in civil cases.

On becoming chair, Jordan said, “It is indeed an honor to continue serving on the commission and I am humbled to have the opportunity to lead the attorneys and private citizens who make up the commission. I look forward to working in my capacity as chair with Tom Maher, executive director of the Office of Indigent Defense Services, Assistant Executive Director Whitney Fairbanks and their entire staff.”

The 13-member commission is the governing body of the Office of Indigent Defense Services, which has goals that include to recruit the best and brightest North Carolina attorneys to represent indigent defendants; to ensure that every attorney representing indigent defendants has the qualifications, training, support, resources, and consultation services they need to be effective advocates; to create a system that will eliminate the many recognized problems and conflicts caused by judges appointing and compensating defense attorneys; and to manage the state’s indigent defense fund in a more efficient and equitable manner.

Jordan has been a member of the commission since 2014 and maintains a state and federal criminal law practice in Salisbury. He has been practicing law since 1990 and was an assistant district attorney for Rowan and Cabarrus counties from 1994 to 2000.