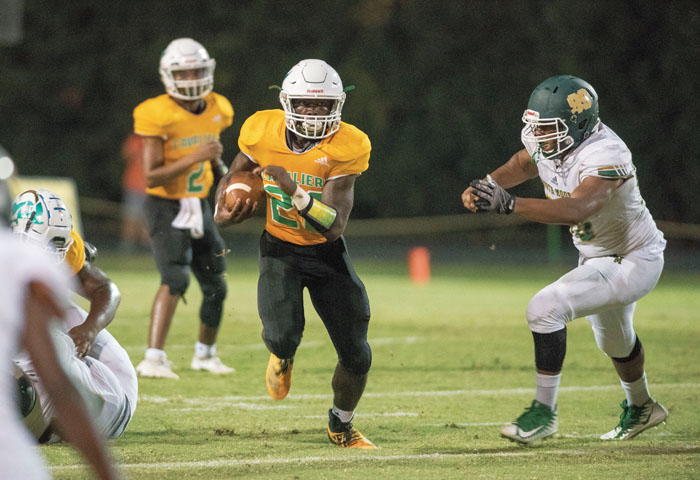 JON C. LAKEY/SALISBURY POST FILE PHOTO ... North Rowan's Malcolm Wilson (22) is shown during an earlier game this season against North Moore. On Friday night, in a 72-3 win over Chatham Central, Wilson rushed for 304 yards and scored a county-record seven touchdowns.

“It’s definitely an honor to be the first one to do this (score seven TDs),” said Wilson, after the game. “I have to give thanks to my offensive line and wide receivers, because if it wasn’t for them tonight, this wouldn’t have happened.

“Everything was blocked up perfectly, so I’ve got to give all of the credit to them,” continued Wilson. “Then, it was off to the races. And I thank Coach (Ben) Hampton, too, for the opportunity.”

Hampton was not surprised by the record-breaking performance of Wilson and his team.

“We’ve talked about it from day one, when he became our starter last year,” Hampton said, of Wilson. “He’s a workhorse and our offensive line has really dedicated itself, after week three, to getting better up front and moving people, changing the line of scrimmage in our favor. And our receivers, on the edge, have done some phenomenal blocking — and knowing when not to block.”

The Massey Rating system gave the Cavaliers an unheard of 100 percent chance to win against the Bears, the state’s 401st-ranked high school football team. The opening kickoff proved the Massey guarantee was going to unfold as expected.

Wilson returned the boot 95 yards for the first of his seven scores, and the rout was on in the Yadkin Valley League contest.

The Cavaliers scored so quickly and often that they had just 22 plays on offense during the entire game. North rushed 17 times for 448 yards (26.3 yards per carry) and saw quarterback Kyree Sims connect on 4-of-5 passes for 35 yards.

In addition to his kickoff return, Wilson scored on runs of 69, 7 and 9 yards in the opening period. Sims got into the act as well in the second period, going 33 yards for a score and when running back Tyshon Sifford scored on a 7-yard run with 3:21 left before halftime, North led 45-3 — enough for a running clock the rest of the way.

Chatham Central (0-8, 0-3) tried a fake punt just before halftime and lost seven yards on the attempt. That gave Wilson another chance before intermission and he cashed in a 38-yard scoring sprint on the very next play.

In the second half, North had just four offensive plays. The Cavs’ first series in the third quarter lasted only three plays, with Wilson scoring from 64 yards out at the 6:25 mark. The run was a thing of beauty, with receiver Kendrell Goodes escorting Wilson down the home sideline, blocking a defender the entire way.

“Goodes and Nasir Luckey, on another long run, blocked their men all the way down the field,” said Hampton. “It was textbook jobs. Without those guys, nights like this for running backs aren’t possible. So we try to love those guys up and make them understand that it’s just as much of an honor for them as it is for Malcolm.”

“It’s not about the record, it’s about the team win and the team getting after it,” added Hampton, “but it’s also nice to have a little cherry on top.”

The Bears were three-and-out again as the fourth period began, but got another possession immediately when North fumbled the punt at the Cavs’ 33-yard line.

Central QB Michael Moore connected with receiver Hunter Strickland for a 25-yard gain, setting up the visitors at the North 8-yard line. However, Moore’s very next pass was read perfectly by North defensive back Orion Harris, who intercepted and raced 86 yards for a capping touchdown, with five minutes left.

Several Cavaliers got involved in points after touchdowns. Sims ran for three two-point conversions and threw to Wilson for another. James Gladden ran for another 2-pointer and extra points were kicked by Brandon Jefferson and Randy Lemus.

While Moore completed 15-of-24 passes for 122 yards, including a 43-yarder to Malachi Moore which set up a second-quarter field goal, the Bears’ had no rushing attack.

The North defense, led by Jefferson, Jordan Goodine, Malachi Turner and others, suffocated the Bears’ running game. Central lost yardage on 13 of its 20 rushing plays, including QB sacks. When the dust cleared, the Bears had minus 42 rushing yards.

Sifford had 76 yards on just three attempts, including a 58-yard romp. Sims ended with 68 yards on three carries. Goodes led the receivers with three grabs for 27 yards.

Wilson’s 304 yards on just 11 carries could also be a new single game record for North Rowan, if the film review proves Friday night’s count correct. It would break the 302 yards by Wilson’s friend and predecessor Jaleel Webster, now playing college football at Averett.

“Jaleel and I worked out almost every day, my freshman an sophomore years, in the weight room and running,” said Wilson, smiling. “I’ve to call and talk to him about seven touchdowns.”

Wilson also had another long TD dash called back by a holding penalty in the first half, or the new record would have been eight touchdowns.

“We’ve got a big one coming up next week, so we’ll get started on that on Monday,” said Hampton. “We’re not so much worried about who we’re playing, but how we’re doing ourselves. Let’s worry about how we execute and let the game plan take care of itself.”