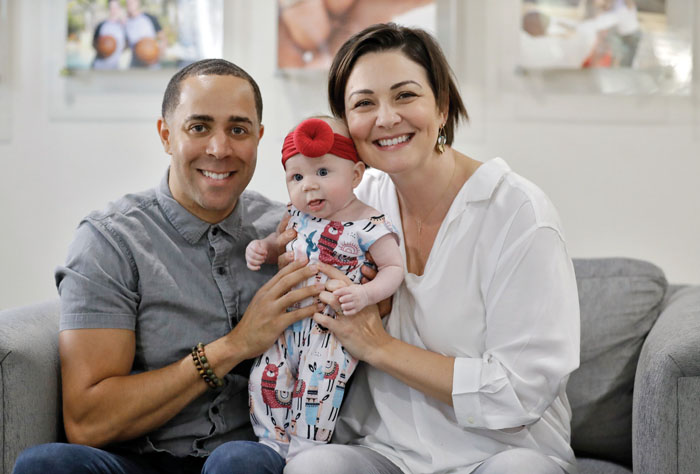 NBA referees Jonathan Sterling, left, and Lauren Holtkamp-Sterling, the only married couple in NBA refereeing history, pose for a photo with their daughter Stoan at their home Thursday, Oct. 3, 2019, in Tampa, Fla. (AP Photo/Chris O'Meara)

TAMPA, Fla. (AP) — Lauren Holtkamp and Jonathan Sterling first met a few years ago at a meeting of college basketball referees in Virginia, and when the group when out for some socializing that night she asked him to dance.

The refs now agree: That was a bad call.

They eventually became the NBA’s first husband-and-wife refereeing duo, and now another first awaits later this season when Holtkamp-Sterling — she goes by the hyphenated name now — is planning to become the first mother to officiate in the league. The couple became parents to a daughter, Stoan, earlier this year.

“It is a different story,” Sterling said. “But for us as a couple, I think it’s just work.”

It’ll be a lot of work. NBA referees get their schedules about a month in advance, spend the bulk of their time on the road and when Holtkamp-Sterling returns to the court she and her husband will be running in opposite directions because there are no plans for them to be assigned to work on the same officiating crew for a game.

Having a baby at home only adds to the juggling act. The NBA has certain programs to make lives easier for new parents, such as paying for the shipping of breast milk when a mother is on the road for work. But the couple knows that they’re embarking on a challenge, one similar in some aspects to what many other “regular” families have to address. In looking for ideas, they have researched what the military does for parents with new families, as well as the policies utilized by the WNBA, the LPGA Tour and the PGA Tour.

“I think in navigating this, what it means to be a married couple who are parents and NBA referees together — together and apart, right? — there’s just such an opportunity to figure it out and be creative,” Holtkamp-Sterling said. “I don’t want to overuse the word innovative, but I really think that is what it’s about … being able to find a path that works.

“It’s really a privilege to be part of that process and on the front end of it.”

Holtkamp-Sterling became just the third female full-time NBA official when she was promoted in 2014; Ashley Moyer-Gleich and Natalie Sago followed to the full-time ranks last year, and more women are under serious consideration to be added to that roster before long.

The last time Holtkamp-Sterling worked a game was in the 2017-18 season. She missed last season with a knee injury that required surgery, and she won’t be ready for the start of the regular season this year while recovering from abdominal surgery. Not returning to the on-court role was considered, though she is now convinced she wants to be back as soon as possible.

“If you think about what all this means for family planning, that’s a unique challenge,” Holtkamp-Sterling said. “We’re traveling all over the United States and our work happens at night, which creates so many more questions. And as this process, knowing we have the support of our league and our union, goes along we’re just going to keep moving forward and see what happens.”

She was at the forefront of a major transition for the NBA in recent years, with women now moving into more and more high-profile roles leaguewide. Adding more women to the NBA corporate depth chart has been a top priority for Commissioner Adam Silver, and the league’s vice president of referee development Monty McCutchen has said he wants more women on the referee roster.

The couple understands the outside fascination with their story — all parts of it, from Holtkamp-Sterling being a trendsetter in terms of more women being on the NBA floor, to one ref being married to another ref, and now the motherhood aspect.

But to them, it’s just life. It’s their new normal.

“We’ve gone two, three weeks without seeing one other during the season,” said Sterling, who made the full-time NBA ref ranks three years after Holtkamp-Sterling did. “It’s like two ships passing in the night. But we try to get together when we can on the road. And I think just being the first married couple on staff … it’s been very good so far.”

They get the same treatment other refs get: They get yelled at by players and coaches, critiqued critically by fans and know that they’re in a profession where compliments are rare.

But both understand that comes with the territory, and neither wants to be overly sensitive or protective of the other.

“When you talk about Lauren, she’s assertive and she’s confident and she does a good job,” Orlando coach Steve Clifford said. “She handles herself that way. To me, she’s just another official.”

They are, very much, a basketball family.

Both played the game in college. There’s a hoop in their driveway. Even the family dog, named M.J. because her white paws reminded them of Michael Jackson’s gloves, has a ridiculously high vertical leap out of excitement when she meets new people.

The couple started their relationship in a competitive way — their first date was a decathlon of sorts, the loser of which had to wear a T-shirt in playfully shameful recognition of the loss, and Holtkamp-Sterling still has her shirt as a reminder. And they’ve been on the same team ever since.

“We’ve got incredible support and incredible family support and the most amazing nanny,” Holtkamp-Sterling said. “I’m very confident that we’re going to be flexible with whatever happens, and I know we’ll be able to always figure it out.”