Livingstone returns to Raleigh, taking on Shaw this time 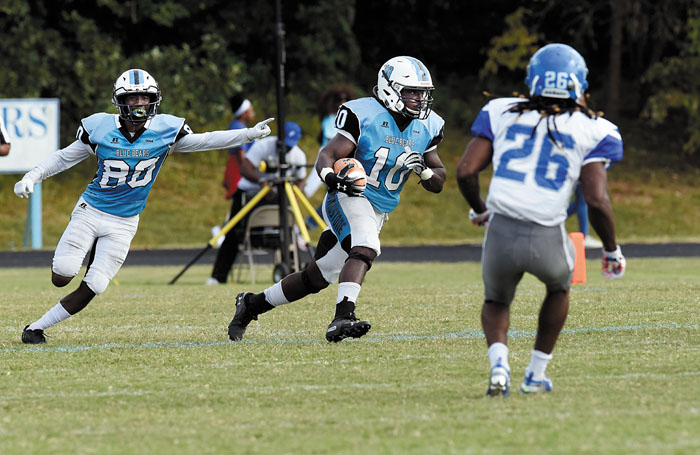 SALISBURY — After a loss, you sometimes hear coaches and players say that they can’t wait to play the next game, “to get the bad taste” out of their mouths.

For Livingstone, not only are the Blue Bears anxious to play Shaw this Saturday, they actually get to play on the same exact field used in last week’s 20-12 loss to St. Augustine’s.

Shaw brought back its football program in 2003, but the Bears do not have an on-campus facility. The team has played a lot of its games at Durham County Stadium, but this season, Shaw plays at St. Augustine’s. Shaw has just three home games in 2019.

“It’s unusual, for sure, to play at the same place two weeks in a row,” said Livingstone coach Daryl Williams. “But, hey, it’s still football and we just need to go out an execute better this week.”

It won’t be easy. Shaw is 2-4 but its losses are to teams (Campbell, Bowie State, Virginia State and Fayetteville State) with a combined record of 20-3.

On the flip side, Livingstone is 4-2, with wins over Clark Atlanta, Elizabeth City State, Allen and Lincoln — who are a combined 2-21.

“Shaw is a big, strong, tough team,” said Williams. “The game always comes down to who makes less mistakes.”

Last week, the Blue Bears dominated early and led St. Aug’s at halftime, 10-0. But many chances were squandered in the first half and when the Falcons rallied in the fourth quarter, the result was an eight-point loss.

“We have to do better in the red zone,” insisted Williams. “A missed field goal and numerous penalties when we were in close basically kept us from scoring points and adding on. It was all self-inflicted wounds.”

To restore order, so to speak, Williams said on Tuesday that senior Xavier Longerbeam will start at quarterback against Shaw.

Longerbeam, a 6-2, 230-pounder from Panama City, Fla., is a four-year player for Livingstone. He shared starting duties in 2016 with Thaddeus Bell, and eventually, when healthy, won the job. However, the Blue Bears went 0-10 in 2017 and the following recruiting class brought in a new QB, Miles Hayes.

Last year, Longerbeam saw some action but the starter for most of the season was the true freshman Hayes. Now a sophomore, Hayes began this season as the starter, but Longerbeam and freshman Lazarus Anderson have also played.

“I think it’s time,” Williams said, of Longerbeam. “We need a shot in the arm. We’ve had too many self-inflicted wounds from that position … things that shouldn’t happen. Xavier brings some age and experience.”

Williams said that the future is still bright for Hayes, despite recent struggles. “Remember, Miles is just a sophomore,” he said. “He’s thinking too much, instead of reacting and playing. So, he just needs to step back for a little.”

The defense shut out the Falcons in the first half, but yielded the lead in the final period. Senior linebacker Raheem Coxfield said that the team is looking ahead, instead of backwards.

“Last week broke us a little bit, but we’re a family and we picked each other up — and this is a new week, a new challenge,” said Coxfield, who is from Adel, Ga., and majoring in interdisciplinary study, with a concentration in history and political science. He is on schedule to graduate in December.

Williams says that Coxfield is a solid linebacker who leads the special teams. “He can run and is a good tackler,” he said. “He does a lot of good things for us. He’s a true ‘mike’ (middle) linebacker, an in-the-box kind of player.”

A transfer from Savannah State in early 2018, Coxfield is refreshingly honest about his rise to a leadership position on the team.

“My coaches developed me into a leader,” said Coxfield. “Honestly, I used to be a negative. I was a frontrunner. But when I became ‘all in,’ my team began trusting me and I trusted them, so that’s when the vocal leadership started coming out. I’ve been on both sides of it.”