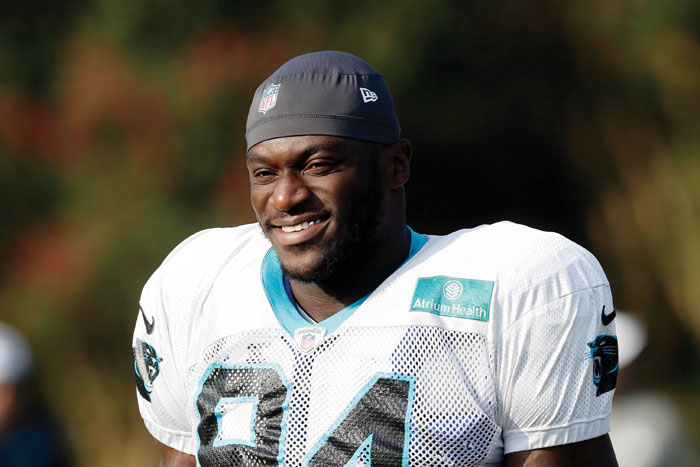 LONDON (AP) — For most members of the Carolina Panthers and Tampa Bay Buccaneers, a game in London is an opportunity to see a new country and experience a different culture.

For Panthers defensive end Efe Obada the game Sunday between Carolina (3-2) and the Bucs (2-3) is a homecoming.

The Nigerian native who arrived in England as a 10-year-old after being trafficked with his sister from the Netherlands, comes back to London as an NFL player and a star attraction after first picking up the sport of American football at age 22.

On a team with many more high-profile players such as star running back Christian McCaffrey, 2013 Defensive Player of the Year Luke Kuechly, and three-time Pro Bowl tight end Greg Olsen, it was a player with just 15 career games who got the biggest reaction when the team arrived at the airport.

“What are the chances of me being on a team that’s going to go back to London? I feel like the stars are aligning,” Obada said.

Obada started playing in London in 2013 and was signed as an undrafted free agent by Dallas two years later. He spent time on the Cowboys practice squad and in the offseason with Kansas City and Atlanta before joining Carolina in 2017 as an International Pathway player, given an extra spot on the practice squad.

He then became the first International Pathway player to make a 53-man roster the following season and is part of Carolina’s rotation on the defensive line.

“He deserves it,” Kuechly said of the attention this week. “He’s worked super hard since he got here. … His journey from where he was until now shows how hard he works and how persistent he is.”

While coming home brings back good memories for Obada, Tampa Bay coach Bruce Arians is hoping for a happier time in London this year than he had two years ago in his first game here with the Arizona Cardinals.

“Not very good,” Arians said about his memories from the 33-0 loss to the Rams in 2017. “We got beat soundly, and our quarterback (Carson Palmer) broke his arm and we lost him for the season in the second quarter. So it was not fond.”

The Bucs are waiting until Friday to arrive, getting in close to a full practice week back home before holding a final one here in London.

Arians said he relied on experts to determine the plan and the approach of when and how much players should sleep to make sure the team is in the best position to win Sunday.

Here are some other things to watch:

Bucs quarterback Jameis Winston is off to one of the best starts of his career with a franchise-record 1,371 yards passing through five games. He’s also tied for second in the league with 11 TD passes, one behind Seattle’s Russell Wilson. The fifth-year pro, who’s earning $20.9 million in the final season of the contract he signed as the No. 1 overall pick in the 2015 draft, had a pair of interceptions returned for touchdowns during a season-opening loss to San Francisco. He’s been solid since, stringing together solid performances against the Panthers, Giants, Rams and Saints as makes his case for being the Bucs’ long-term solution at quarterback.

ADDISON ON A TEAR

Panthers defensive end Mario Addison is off to the best start of his NFL career with six sacks in the past three games, including a sack-fumble last week against the Jaguars that was returned 56 yards for a touchdown by teammate Brian Burns. Addison had at least six sacks in six straight seasons for the Panthers and is on pace to top his career high of 11 set in 2017.

Tampa Bay’s Chris Godwin is coming off consecutive games in which he’s had at least 125 yards receiving and two TDs. If he does it again Sunday, the third-year receiver will join Andre Rison (Falcons, 1990), Hall of Famer Don Maynard (Jets, 1967-68) and Cloyce Box (Lions, 1952) as the only players in NFL history with three straight games with those gaudy numbers. Two weeks ago, Godwin had 12 receptions for 172 yards and two scores against the Giants. He had seven catches for 125 yards and two more TDs vs. the Saints.

Panthers kicker Joey Slye will be looking to bounce back from a troubling performance last Sunday when he missed two field goals and an extra point. That came after Slye was selected as the NFC special teams player of the month when he made 10 of 11 field goals in September, including four from beyond 50 yards. So the big question is whether it was a just a blip on the radar or if the team needs to be concerned moving forward with the undrafted rookie. Panthers coach Ron Rivera believes Slye might have sped up his kicking motion last week after his initial field-goal attempt was blocked.

Bucs OLB Shaquil Barrett leads the NFL with nine sacks, despite having none in Sunday’s 31-24 road loss at New Orleans. With opposing teams beginning to make adjustments to try to slow the sixth-year pro who had just 14 sacks in four seasons with Denver before signing a one-year, $4 million contract with the Bucs in free agency, Tampa Bay coach Brian Arians said other members of the Bucs defense have to take advantage of the extra attention being paid to Barrett.