Phil Mickelson racing the clock and spinning his wheels 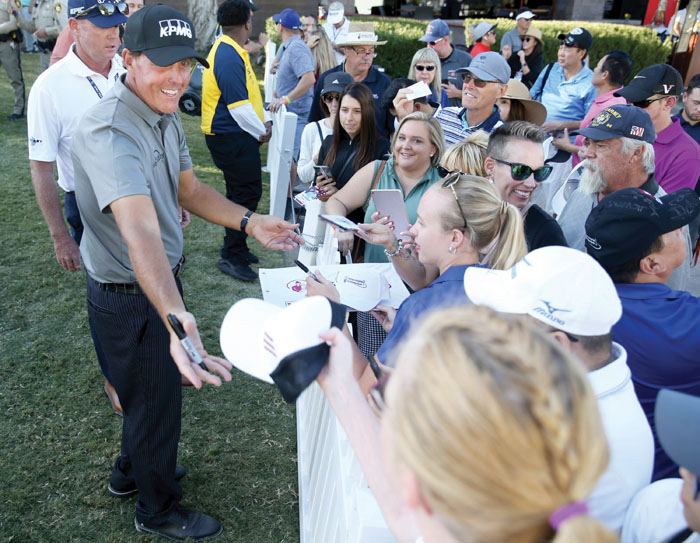 Phil Mickelson has never played this much golf this late in the year since the PGA Tour began a new season in October instead of January.

He’s never had this much of a reason.

Mickelson is running out of time to show why U.S. captain Tiger Woods should pick him for the Presidents Cup. At stake is a streak that is unlikely to be matched. Mickelson has played on 24 consecutive Ryder Cup and Presidents Cup teams, qualifying for 20 of them. The last time he wasn’t on a team was 1993, the year Justin Thomas and Jordan Spieth were born.

Through two tournaments, there are few signs of progress except for his weight loss.

As always with Mickelson, there is no shortage of optimism.

How else to explain how a player can be so good for so long? How he could win his first PGA Tour event when he was in college and his most recent when he was a year away from being eligible for the PGA Tour Champions?

How he could go nearly 26 consecutive years among the top 50 in the world?

“The challenge of playing golf at the highest level brings out the best in me,” Mickelson said in Las Vegas after he tied for 61st in a tournament he had not played since 2005. “It forces me to get in the best shape, forces me to work hard and to focus on something positive, improving my game. It gives me a direction, and it’s been a big part of my life and I love it.

“It’s a fun challenge for me right now to play my best golf.”

It doesn’t look like much fun, not based on the results.

He began his 29th season on the PGA Tour by hitting consecutive shots out-of-bounds on the par-5 fifth hole at Silverado and making a quadruple-bogey 9, which led to a 75 and a missed cut in the Safeway Open. The next week in Las Vegas, just four shots out of the lead going into the weekend, Mickelson shot 74 in the third round on a TPC Summerlin course that yielded six scores of 63 or lower.

Mickelson finished too low to earn world ranking points in Las Vegas and dropped to No. 46.

Next up for him is the CJ Cup at Nine Bridges in South Korea next week, and he has hinted strongly about playing the HSBC Champions in Shanghai, where he has won twice. That’s the final event before Woods makes his four captain’s picks.

If Mickelson doesn’t perform well in either of those, he will be out of the top 50 by the end of the year. The last time he was in danger of that was the start of 2018. He was at No. 49 and then tied for fifth in the Phoenix Open. A month later, he won the Mexico Championship.

That’s what makes Mickelson so compelling, along with his sheer talent, imagination and willingness to take on any shot. Even at age 49, having gone seven months without so much as contending, there is no telling what Lefty will do next — or when.

It’s not just about playing in another Presidents Cup. That streak will end at some point, and it might take a win for Woods to justify picking him over the seven players ahead of Mickelson in the standings, a list that includes U.S. Open champion Gary Woodland, Rickie Fowler and Woods, who has not ruled out being a playing captain at Australia’s Royal Melbourne in December.

Mickelson won’t accept anything less than what he believes he can do.

“There’s no reason why I shouldn’t be able to play at my best,” he said at the Safeway Open. “I’m physically able to do it, my game feels sharp, the touch is there, the elements are there and yet I haven’t been pulling it out. But I’m determined to turn that around.”

Mickelson first mentioned when he won in Mexico City last year that he wants to reach 50 wins on the PGA Tour. “Oh, I will. I’ll get there,” he said that day after No. 43. When he reached No. 44 at Pebble, he was a little more practical about it — not because he’s getting older, but because winning is getting harder.

Lefty has never played more than twice in the fall since the PGA Tour went to the wraparound season in 2013. Now he’s playing at least three tournaments, probably four, with hopes of making it five at the Presidents Cup.

In June, the U.S. Open returns to Winged Foot, where he made double bogey on the 18th hole to lose the U.S. Open, the only major he hasn’t won.

This much is certain: Whether he gets there or not, Lefty will go down swinging.

Braves, Cardinals back in Atlanta for Game 5