Cardinals’ Wainwright to face Braves, Soroka in Game 3 of NLDS 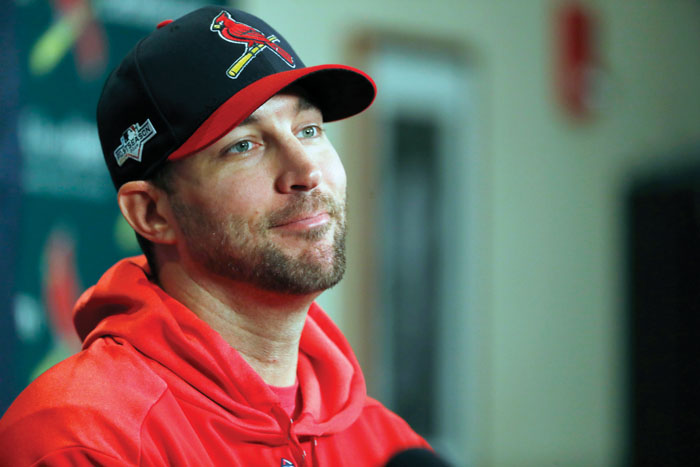 St. Louis Cardinals starting pitcher Adam Wainwright listens to a question during a news conference at the baseball National League Division Series Saturday, Oct. 5, 2019, in St. Louis. Wainwright is expected to start when the Cardinals play Game 3 of the series against the Atlanta Braves on Sunday in St. Louis. (AP Photo/Jeff Roberson)

ST. LOUIS (AP) — When October baseball returns to St. Louis on Sunday, Adam Wainwright will get the ball for the Cardinals again. Just like he has for so many big games over the past 14 years.

It was almost a much different picture. If not for one December trade back in 2003, Wainwright might be pitching for Atlanta in Game 3 of the NL Division Series.

The 38-year-old Georgia native, who was selected by Atlanta in the first round of the 2000 amateur draft, will make his 13th postseason start when the Cardinals take on Mike Soroka and the Braves in the first postseason game in St. Louis in four years.

“Feeling that playoff buzz in the crowd when the games are actually going on, you can never replace it or replicate it any other place in life that I’ve seen,” he said. “It’s just a feeling that is beyond compare. So I’m looking forward to it. I’m excited to be back in the playoffs.”

The NL East and Central champions split the first two games of the best-of-five series in Atlanta. Paul Goldschmidt homered to help St. Louis rally for a 7-6 victory in the opener, and Mike Foltynewicz pitched seven sparkling innings in Atlanta’s 3-0 win in Game 2.

Two days after Foltynewicz’s dominant performance, Soroka takes the mound for the Braves. St. Louis, a regular October playground before its longest drought in two decades, might not seem like the best spot for a playoff debut, but Soroka is no ordinary pitcher.

The 22-year-old right-hander went 7-1 with a 1.55 ERA in 16 road starts this year, compared with 6-3 and a 4.14 ERA at home. He allowed one earned run in 13 innings in two May starts against the Cardinals, including six effective innings in a no-decision at Busch Stadium.

“I think he understands that when he gets in trouble that he has something — he’s a pitch away from getting out of trouble.”

Soroka said he isn’t sure why he has been so good on the road this year compared with at home, but growing up in Canada could be a factor.

“Every important game I would have pitched in would have been either not in Calgary, not even in Canada, usually in another country — Pan Ams in Mexico, games in Cuba, all that kind of stuff,” he said.

“I think maybe I just got used to being in unfamiliar places and that’s when I found I loved to play.”

Soroka was 9 when Wainwright made his postseason debut in 2006, helping St. Louis win the World Series for the first time in 24 years. The 6-foot-7 right-hander has been versatile in the playoffs, going 4-4 with a 3.03 ERA and four saves in 24 appearances.

For a long time, Wainwright was hoping to pitch in big games for Atlanta. He was a prep star in Brunswick, Georgia, when he was drafted by the Braves with the 29th overall pick in 2000.

He had just finished a solid season playing for Snitker at Double-A Greenville when he was shipped off to St. Louis with Jason Marquis and Ray King for J.D. Drew and Eli Marrero.

“When we had him he was a young guy,” Snitker said. “You saw great potential. You hated to lose him. I remember when we traded him and I called him.

“But you saw — and I realize — you realized at the time you’ve got to give up something to get something. And it’s just been really cool to see how he’s developed, his career, following him.”

Drew hit .305 with 31 homers in his only season with Atlanta, but the Braves were eliminated by the Astros in the first round of the 2004 playoffs — part of a streak of nine straight playoff series losses that is one away from the Cubs’ record for postseason futility.

While Drew, Marrero, Marquis and King played for multiple teams after the trade, Wainwright never left St. Louis. He ranks fourth on the franchise list with 162 career wins, just one back of Bob Forsch.

He was limited to eight starts last season because of hamstring and elbow problems, but he decided to keep playing and signed a one-year deal last October. Healthy again, he went 14-10 with a 4.19 ERA in 31 starts this year.

“I always tell these guys, old players means good players,” Wainwright said. “You don’t get to be an old player if you’re not a good player.”