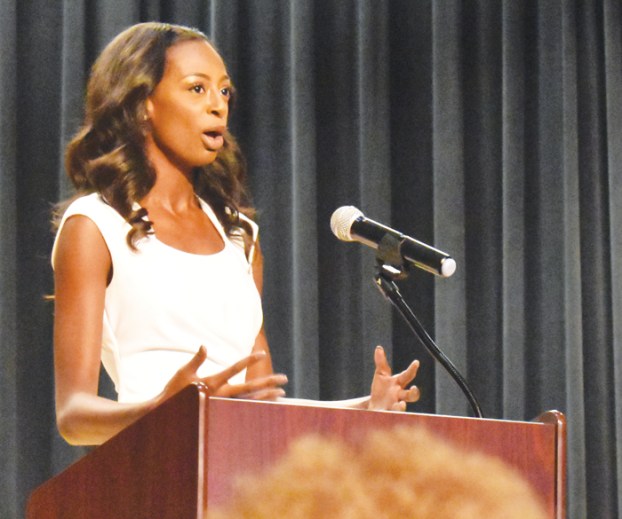 Badgett, who is from Denver in Lincoln County, earned the title on June 22, representing Jacksonville in a statewide pageant. She is the second African American to earn the title.

She spoke from the heart during her speech.

“I am so honored to be here and excited to share my journey with you all,” she said. “When I heard today’s topic would be about living the legacy, I was so excited because it was so fitting. I feel like much of my life I’ve been growing trying to figure out what I wanted my legacy to be.”

Badgett, who was born in Charlotte, was raised by a single mother who juggled four jobs, one of them being the owner of BB Dance Productions, a dance studio in Charlotte.

“As early as middle school, people were asking me, ‘Do you want your legacy to be continuing your mom’s business?'” she said. “Without any hesitation, I would say, ‘Yeah that’s it, I’m going to follow in her footsteps.’”

Badgett said her journey through undergraduate studies at the University of South Carolina was one that was her resting place.

Badgett said she also saw her time in college as a time to find her own voice.

Her involvement at USC started with joining the freshman council, being a part of the university ambassadors program and a member of the Carolinas Girl dance team.

Although Badgett was highly involved in college, she eventually found herself conflicted.

“I always found myself molding and shaping my legacy proving to someone else that I could do it,” she said. “It was never about really proving to myself that this is something that I could do. I was doing everything in my life for somebody else. I was never doing it for myself.”

Badgett said the plans she had for her life were ones she formed watching others.

Her advice to students at Livingstone was to learn how to love themselves.

“I encourage you all to find that thing that makes you,” she said.

In an interview with the Post, Badgett said not comparing herself to other people was one of her biggest challenges she has had to overcome after college.

“Once I stepped outside of college, I knew that there was this journey in store for me. It was just about finding exactly what that journey looked like,” she said. “After coming to peace with myself, I knew that he was with me every step of the way.”

Badgett has collectively earned over $22,000 in scholarships from participation in the Miss America Organization and graduated from the University of South Carolina Honors College with a bachelor’s degree in business administration.

Her social impact initiative for the pageant is N.I.N.E (No Is Not Enough), which aims to deepen the message of the anti-rape anthem “no means no.”

As Miss North Carolina 2019, she aims to stress the importance of educating people on preventive measures and public policies, providing survivor outlets, informing students of resources and confirming Title IX regulations are being followed.

“I’ve learned to be at peace with this journey, and just have so much confidence with this bigger goal that the lord has in store for me. I know the only way for me to be able pursue that goal is to be able to continue to be the person that he shaped me to be,” she said.

SALISBURY — The Salisbury City Council on Tuesday agreed to a $10,000 investment in Team Automotive Group to open its... read more