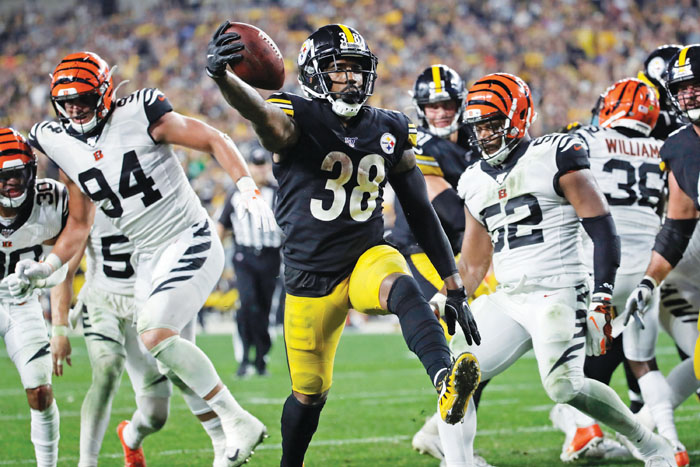 Pittsburgh Steelers running back Jaylen Samuels (38) scores on a 2-yard run during the second half of an NFL football game against the Cincinnati Bengals in Pittsburgh, Monday, Sept. 30, 2019. (AP Photo/Don Wright)

PITTSBURGH (AP) — Jaylen Samuels felt as if he’d jumped into a time machine.

Standing in the shotgun while working out of the wildcat formation on Monday night against Cincinnati, the Pittsburgh Steelers running back was transported back to his freshman year at North Carolina State, when Wolfpack offensive coordinator Matt Canada would experiment with a player who defies traditional labels.

Pop passes to teammates running in motion in front of him? Check.

Take the snap and search for a crease himself? Check.

Samuels had done it all before. Many times.

“It was nothing new to me,” Samuels said.

It did, however, look completely new to the Bengals, who couldn’t seem to figure out how to defend Samuels and backfield mate James Conner as the Steelers pulled away for a 27-3 victory that — momentarily at least — put them back in the thick of the AFC North.

Samuels accounted for 114 total yards and a touchdown. Conner had 125 all-purpose yards and a score and for the first time this season, Pittsburgh’s offense looked potent.

“You’ve got to be creative,” guard Ramon Foster said. “You look around the league right now, it’s what teams are doing, spreading you out, going up the middle. That’s where the league is right now, you’ve got to do the same.”

That doesn’t necessarily mean the wildcat will become a weekly fixture. After sputtering on the ground through the first three games, offensive coordinator Randy Fichtner and running backs coach Eddie Faulkner needed to come up with something to provide a boost. This week, it was the wildcat.

Next Sunday against Baltimore (2-1), it might be something completely different. That’s not necessarily a bad thing for a unit trying to find its way without Ben Roethlisberger.

Roethlisberger watched from the sideline with his surgically repaired right arm basically mummified as backup Mason Rudolph won his first game as an NFL starter. Working almost exclusively underneath until a backbreaking 43-yard touchdown heave to rookie wide receiver Dionate Johnson, Rudolph completed 24 of 28 passes for 229 yards and two scores. He received the game ball afterward, but made it a point to praise Fichtner’s unorthodox approach.

“It is a big switch when you have a guy who has been here for 16 years and likes what he likes and kind of coaches one way and then has the younger guy come in,” Rudolph said. “(Fichtner) has been unbelievably open to suggestions on my end and so we are going to continue to work and continue to gel with this younger group.”

A group that will face another significant test against the Ravens, who will come to Heinz Field smarting after getting kicked around by Cleveland.

Pittsburgh spent the offseason and all of training camp focusing on the importance of having better “ball awareness,” code for “creating turnovers.” It appears to be working. The Steelers have nine takeaways four games into 2019, just six fewer than they had all of last season. Monday night the takeaways came on Bud Dupree’s strip-sack of Cincinnati quarterback Andy Dalton that halted a drive in Pittsburgh territory. The second came in the fourth quarter when linebacker Mark Barron intercepted Dalton in the end zone.

The wide receivers are still having trouble creating separation, which is one of the reasons Rudolph has been reluctant to go down the field. JuJu Smith-Schuster had just three catches for 15 yards, but his presence did create an opportunity for Johnson. Midway through the third quarter, Johnson took off on a post route. He thought he was covered when the coverage slid over to Smith-Schuster, Johnson found himself wide open for a touchdown that put the Bengals away.

Less than a week after arriving in a trade with Seattle, newly acquired tight end Nick Vannett looked right at home. He caught two passes for 28 yards and pitched in to protect Rudolph, who was not sacked.

James Washington. When Rudolph took over the starting gig, the conventional wisdom is that Washington — who played alongside Rudolph at Oklahoma State — would take off. He hasn’t. He didn’t catch a pass on Monday and was only targeted once.

100: the percentage of kicks made by Chris Boswell this season (7 for 7 field goals, 7 for 7 extra points) a year after he made only 65 percent of his field-goal attempts.

Cincinnati’s porous offensive line is one thing. Baltimore’s dynamic offense led by Lamar Jackson is quite another. The Steelers’ aggressiveness will be tested by the second-year Jackson, who did not start in either of Baltimore’s two meetings with Pittsburgh last season.

CHUBB SO UPBEAT HE INSISTS HE ACTUALLY WELCOMES TORN ACL

ENGLEWOOD, Colo. (AP) — Bradley Chubb is so upbeat about emerging as a better person and player from his torn knee ligament that he said he truly welcomes this season-ending injury .

“I’m happy this actually happened to me because I feel like in life I was getting a little too complacent,” the Denver Broncos’ rising young star said Tuesday, about 48 hours after tearing his left ACL, the same one he ruptured seven years ago in high school.

“With 12 sacks as a rookie it’s kind of hard to keep that same grind,” said Chubb, the fifth overall pick in the 2018 NFL draft. “So, I’m really happy that this happened to me because it’s a humbling experience and it’s going to get me back to that same guy that was hungry to get college offers, the same guy that was hungry to go out there and prove everybody wrong. So, I’m glad to be back in that same position.”

Chubb got hurt in the fourth quarter of Denver’s 26-24 loss to Jacksonville on Sunday, when he recorded his first sack of the season. Still, he finished the game and even forced a fumble on the final series. The ball, however, bounced right back to quarterback Gardner Minshew, who drove the Jaguars to the winning field goal as time expired.

That sent the Broncos (0-4) to their eighth straight loss and tied the franchise futility mark for the worst start in the team’s 60-year history.

A bigger loss came Monday when Chubb awoke with what he figured was the usual postgame stiffness in his left knee but went in to make sure and an MRI revealed the partial tear .

“Cried my eyes out to my mom, my dad and my brother,” Chubb said.

His next call was to Von Miller, who overcame an ACL tear early in his career to lead the Broncos to a Super Bowl title two years later.

“I called Von and let him know that I was probably going to be down for the year just because I knew he went through the same thing in 2013 and his main message to me was, ‘It’s going to make you a better person, a better pro,’” Chubb said.

Chubb didn’t realize he was seriously hurt even though he’d torn the same ligament before his senior year at Hillgrove High School in Powder Springs, Georgia.

“It’s crazy how that works. But that was my first injury. Like I said, it made me who I am today,” Chubb said. “I was in the hospital bed not knowing if I was going to get college offers and look where I am now.”

Chubb recovered and earned a scholarship offer to North Carolina State, where he collected 100 tackles and 25 sacks in four years and emerged as the top defender in last year’s draft.

“So, I can only imagine what this injury is going to do for me,” Chubb said. “I’m still young. Only in my second year. So, I’m just excited to get back and get into the rehab process. I mean, the technology from 2012 to now is 10 times different, so I know I’m going to be back even better.”

Chubb said he’s not worried this will chronic.

“No concern at all,” Chubb said. “I mean, it’s seven years apart and I made it through my senior year in high school, made it all through college, played 16 games last year. So, I mean, reinjuring it is not going to be on my mind at all. I know the person that I am. I’m not a fearful person. I’m not going to be thinking of this and that while I’m playing the game.”

The Broncos placed Chubb on IR Tuesday and signed outside linebacker Jeremiah Attaochu, a sixth-year free agent and former second-round pick of the Chargers. They also waived inside linebacker Keishawn Bierria and signed tackle Calvin Anderson off the Jets’ practice squad.

Chubb, the only player in the league with 80-plus tackles, 13-plus sacks and multiple forced fumbles (three) since 2018, said he hasn’t scheduled his surgery yet.

He said he plans to stay engaged with his teammates as they seek to bounce back from their bad start.

“Just because I’m sidelined with an injury doesn’t mean I can’t be Bradley Chubb,” he said. “So, my main thing is to just take as many positives as I can from this situation and just move forward.”