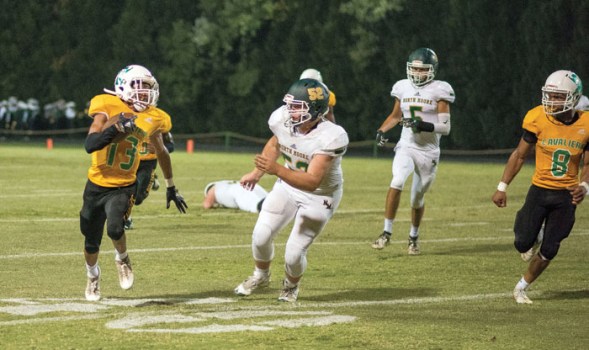 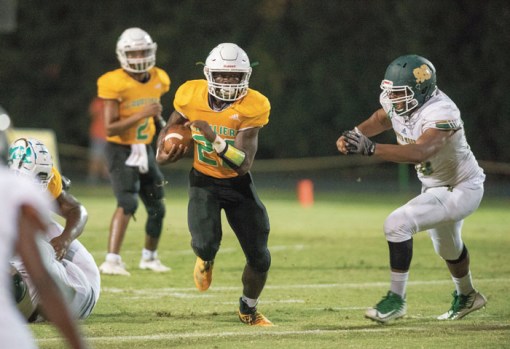 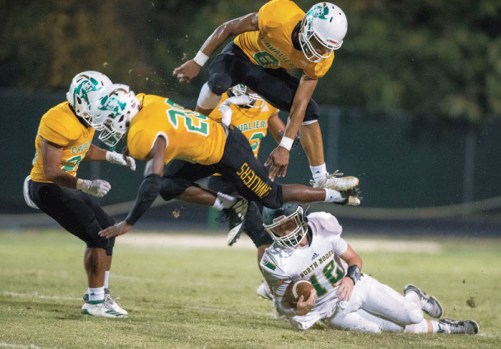 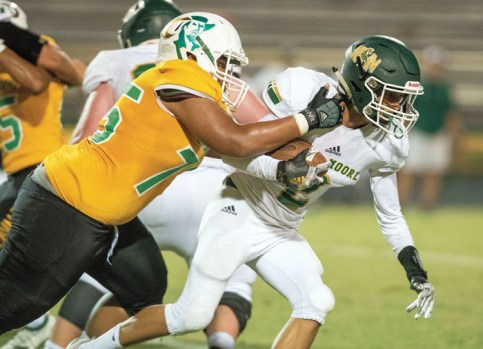 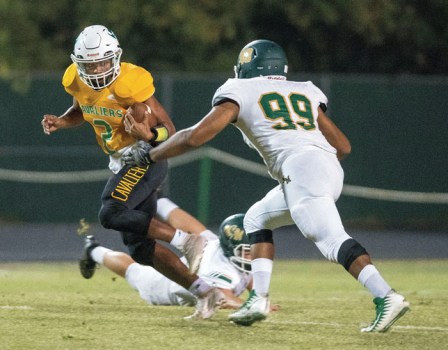 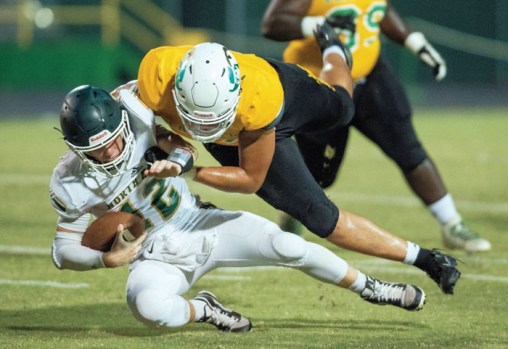 SPENCER – North Rowan opened Yadkin Valley Conference play in dominating fashion here Friday night, with a stifling 39-0 win over North Moore. This was a game that definitely belonged to the Cavaliers’ defense.

In a contest called early in the fourth quarter due to lightning in the area, the Cavaliers overwhelmed the Mustangs by holding the visitors to 20 total yards and just three first downs. North (3-3, 1-0 YVC) also victimized North Moore (1-3, 0-1 YVC) for two pick-six touchdowns, four sacks, eight tackles for loss, and a safety, for good measure.

“I was pleased with our defense, overall,” said Cavaliers’ head coach Ben Hampton. “But I was really pleased with our secondary play. That was the best they have played all year. We put in a couple of new coverages in the past two weeks and you could see it coming together out there tonight.”

The Cavaliers’ defense harassed North Moore quarterback Gage Pennington all night, stuffing a number of screen passes for little or no gain. Pennington finished the night with six completions for just 15 yards and was sacked four times. Brandon Jefferson, Deon Fair, Caelen Stinson and Jordan Goodine had the sack honors.

Special teams got in on the act, midway in the third quarter, with North Moore punting from their own 18-yard line. The snap sailed well over the punter’s head and into the end zone. The Mustangs recovered the ball but it was a safety for North Rowan, making it 24-0.

The dazzlers on defense, however, were the pair of interception returns for touchdowns, one at the end of the first half by Jyrik Scott and the second, at the end of the third quarter by free safety Zay Davis.

With the score at 14-0, Pennington threw deep over the middle for North Moore but Scott snagged the pass for the Cavs at his own 34-yard line and wove his way to the end zone. The last man to have a shot at him near the 10-yard line was completely faked out by a Scott juke move.

“It was really kind of unexpected, because I wasn’t sure the ball was going to come to me,” said Scott, a 5-9 junior. “But I got good blocking and my teammates really did a good job.”

The big play ended the half at 22-0 after quarterback Kyree Sims ran in the two point conversion.

The second pick-six at the end of the third period was produced by Davis from 25 yards out when he grabbed a Pennington pass in full stride. “There was no way they were going to stop me on that one,” said Davis, a 5-10 junior. “We really needed that one. We played a great game and we didn’t even get to finish it.”

The Davis score was the final nail in the coffin and made it 39-0 with just 25 second left in the third quarter. Just a few plays later, early in the fourth quarter, the officials cleared the field when lightning was spotted in the area. Hampton stated that given the score and the time remaining (11:44) the two teams decided to end the game at that point rather than wait out a 30-minute (or longer) delay.

While the defense was shining brightly, the North Rowan offense was very efficient, despite not putting up a lot of big numbers. Star senior runner Malcolm Wilson rushed for 72 yards, including a 22-yard TD run to open the scoring in the first period. Wilson also caught a pair of passes for 41 yards. His numbers could have been more impressive, but a 41-yard run and a 54-yard TD screen pass reception were both nullified by holding penalties.

Sims, a 5-9 junior quarterback, had a solid night with 141 yards passing and a pair of touchdown passes. “Our screen passes were working well tonight and we worked on it all week in practice” Sims said. “I feel like I am getting better and if I keep working, I will get there with my passing.”

He threw to Kendrell Goodes for a 14-yard score in the early second quarter to make it 14-0, then found Denerio Robinson, Jr. on a middle screen for an 8-yard TD, making it 32-0, late in the third quarter. Sims also capped off a couple of touchdown plays with two-point conversion runs.

Hampton was not happy with the turnovers that hampered the Cavaliers in the game, however, as they lost a pair of fumbles and had one interception.

“Turnovers are non-negotiable and you can’t defend a turnover,” Hampton said. “We have just got to take better care of the football and be consistent and cut out the mental mistakes. But it is still good to get our first conference win tonight.”

North Rowan will return home to James Carr Eagle Stadium next Friday night with another YVC contest against a strong South Stanly team.  “We have got our goals for this team,” Hampton said, “and right now, all of our goals are still intact.”