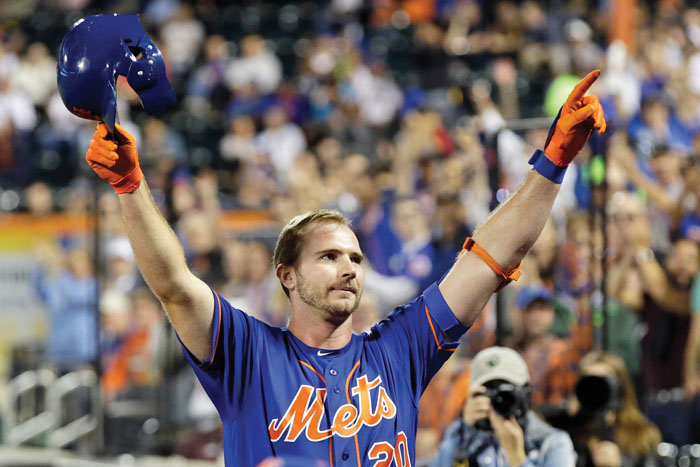 New York Mets' Pete Alonso takes a curtain call after hitting his 52nd home run of the season during the first inning of a baseball game against the Atlanta Braves, Friday, Sept. 27, 2019, in New York. (AP Photo/Adam Hunger)

By JAKE SEINER AP Sports Writer
NEW YORK (AP) — The Polar Bear has his paws on a major league record.
Pete Alonso hit his 52nd homer to match Aaron Judge’s rookie mark in the New York Mets’ 4-2 win over the Atlanta Braves on Friday night. He has two games left to claim the record outright.
Alonso connected in the first inning against Dallas Keuchel, narrowly clearing the wall in left field for a solo shot that tied Judge’s total from his breakout season with the New York Yankees in 2017.
The 24-year-old Alonso smiled as he hurried around the bases and pointed to the home fans as he crossed the plate. Teammates greeted him with handshakes outside the dugout, and the crowd at Citi Field insisted on a curtain call.
“Unbelievable,” Alonso said. “When I was rounding the bases I felt like a little kid. I felt like a 7-year-old kid. I was just really kind of overcome with pure joy.”
Keuchel was booed when he walked Alonso in the third inning, and the big slugger popped up and struck out in his final two at-bats.
“I knew it was going to happen eventually,” Judge said after the Yankees’ 14-7 victory at Texas. “Just the type of swing he has and watching someone’s at-bats early on in the year. This kid … this one’s special. He’s got something about it. You saw his great determination in that Home Run Derby, too. He’s got the ‘it’ factor.”
Alonso leads Cincinnati’s Eugenio Suárez by three for the majors’ home run lead and would be the first rookie since at least 1900 to claim the big league crown outright. Manager Mickey Callaway said he may bat Alonso leadoff in the final two games to get him extra at-bats, and Alonso was eager to slide up a spot.
A history major in college with “an affinity for that kind of stuff,” Alonso said he’s struggling to comprehend the accomplishment.
“When I think of baseball history, I think old-timey guys like Lou Gehrig, Babe Ruth, Barry Bonds,” Alonso said. “Geez, I mean, to think that as a rookie I hit more homers than everyone except for one guy, it’s nuts. It’s crazy. I’m not trying to sound any other way. It’s just, wow.”
Alonso has already set franchise records for homers, total bases (343) and extra-base hits (84). He has 119 RBIs and 100 runs, becoming the first Mets rookie to reach triple digits in both categories. No New York player had reached those totals in any season since David Wright and Carlos Beltran in 2008.
Alonso’s 119 RBIs are five shy of Wright’s franchise record set in ’08.
“He’s been outstanding,” Callaway said. “There’s just something about Pete that draws everybody in.”
TOAST OF THE TOWN
Alonso’s only conversations with Judge have been quick chats at first base during games, but Alonso said he may reach out and try to get dinner with Judge in the offseason. He grinned when asked about embracing a cross-borough home run rivalry.
“There’s nothing wrong with some friendly competition,” he said.
EASING INTO OCTOBER
Braves star Freddie Freeman returned to the lineup and went 0 for 5 after taking four days off to rest his sore right elbow. The four-time All-Star has a career-high 38 homers but none since Sept. 1, and the NL East champions are hoping to get him right before they open an NL Division Series on Thursday.
“Freddie feels great,” manager Brian Snitker said. “I think it’s just more the fact he hadn’t hit in four days.”
With Ronald Acuña Jr. resting his tight left hip for the rest of the regular season, the Braves dropped to 97-63, ensuring the club will fall short of 100 wins. They haven’t reached triple digits since 2003.
Keuchel (8-8) allowed four runs over five innings in his final postseason tuneup. The left-hander was pulled after 98 pitches.
“Just a few pitches I’d like to have back,” Keuchel said. “But other than that, felt pretty good, so that’s really the main key.”
MORE METS
Mets starter Marcus Stroman (10-13) pitched two-run ball over six innings in his season finale, and J.D. Davis hit his 21st homer.
Stroman allowed hits to four of his first five hitters — the out was scorched 104 mph by Freeman for a fielder’s choice — and trailed 2-0 after the top of the first. He finished with eight strikeouts, six hits and a walk.
Over 11 starts after being acquired from Toronto in July, the 5-foot-7 Stroman went 4-2 with a 3.77 ERA.
Seth Lugo pitched the final two innings for his sixth save a day after Callaway said he’d limit Lugo to one-inning appearances with New York eliminated from postseason contention. Lugo struck out two, setting a career high with 104 for the season.
TRAINER’S ROOM
Braves: Freeman said he couldn’t straighten his right arm before resting this week, but now feels like he’ll be good to go through the postseason. He expected to play all three games this weekend. … OF Ender Inciarte (strained right hamstring) felt discomfort trying to run this week and has been shut down. Snitker said Inciarte may be ready by the second round of the playoffs. He last played Aug. 16. … Speedy OF Billy Hamilton was pulled after jamming his thumb on a slide and was pulled as a precaution. He’s expected to be fine.
Mets: 2B Robinson Canó was held out of the lineup with New York out of postseason contention.
UP NEXT
Braves right-hander Mike Foltynewicz (8-5, 4.46 ERA) is 4-0 with an 0.69 ERA in four starts this month, setting in nicely following a rocky season. He’ll face Mets lefty Steven Matz (10-10, 4.37 ERA).
___
AP Sports Writer Schuyler Dixon contributed to this report.
___
Follow Jake Seiner: https://twitter.com/Jake_Seiner
___
More AP MLB: https://apnews.com/MLB and https://twitter.com/AP_Sports

College football: Bulldogs have been bad news (Wingate at…