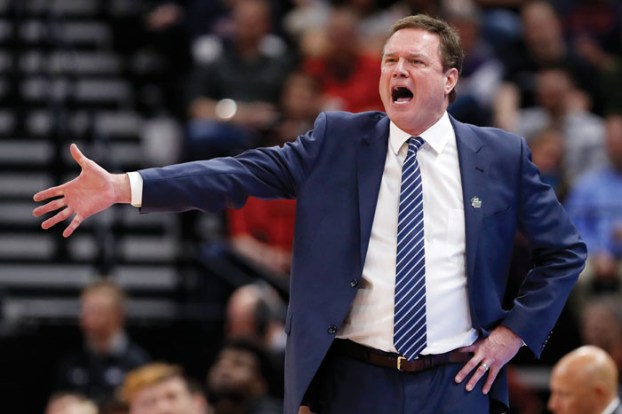 FILE - In this March 21, 2019, file photo, Kansas head coach Bill Self reacts in the first half during a first round men's college basketball game against Northeastern in the NCAA Tournament in Salt Lake City. A person familiar with the situation says the University of Kansas received a notice of allegations from the NCAA on Monday, Sept. 23, 2019, that alleges significant violations within its storied men's basketball program. The person spoke to The Associated Press on condition of anonymity because neither the NCAA nor the school had announced the notice, which was first reported by Yahoo Sports. That initial report, citing unnamed sources, said the notice included three Level 1 violations tied primarily to recruiting, lack of institutional control and a responsibility charge leveled against Hall of Fame coach Self. (AP Photo/Jeff Swinger, File)

Kansas, others saying NCAA is using them as examples

LAWRENCE, Kan. (AP) — The University of Kansas wasted little time issuing a forceful response to the NCAA after it received a notice of allegations that leveled serious accusations against its storied men’s basketball program and its Hall of Fame coach.

Not only did the school deny many of the charges, and seek to diminish others, it also attempted to shift the narrative to one of victim by suggesting the NCAA is trying to make an example out of the Jayhawks.

“It’s no secret that there is tremendous pressure on the NCAA to respond to the federal court proceedings involving college basketball,” said Jayhawks coach Bill Self, who was singled out in the NCAA notice. “Compelled to reassure member institutions and the general public that it can police its member institutions, the NCAA enforcement staff has responded in an unnecessarily aggressive manner.”

The reason is simple: The NCAA also is under intense scrutiny.

The organization announced in late 2017, shortly after an FBI probe revealed a seedy underbelly of college basketball, the formation of a commission to provide recommendations on cleaning up the sport. Chaired by former Secretary of State Condoleezza Rice, the panel returned a number of suggestions ranging from the reformation of AAU and youth basketball to addressing the NBA’s one-and-done rule.

But the commission also called for the NCAA to enact “significant increases in penalties imposed on institutions and individuals for violations of NCAA rules.” In the case of Level I violations, the panel said, schools should be subjected to financial penalties, postseason bans and other penalties.

Now, many schools believe the NCAA is taking those suggestions to an extreme.

“In its haste and attempt to regain control (of college basketball),” Self said, “the enforcement staff has created a false narrative regarding me and our basketball program.”

That accusation in some ways is just as damning as those leveled by the NCAA against one of college basketball’s bluebloods.

It’s also a common one for schools that have run afoul the rules.

In January, the NCAA banned Missouri’s football, baseball and softball programs from postseason play for a year while placing the entire athletic department on probation following a two-year inquiry that revealed academic misconduct involving a former tutor.

The school has appealed the decision with Chancellor Alexander N. Cartwright calling the penalties “harsh and inconsistent” and athletic director Jim Sterk calling them “simply unfair.”

“The Committee on Infractions abused its discretion in applying penalties in this case,” Sterk said at the time. “It is hard to fathom the university could be cited for exemplary cooperation throughout this case, yet end up with these unprecedented penalties that could unfairly and adversely impact current and future Mizzou student-athletes.”

The school, which is nearing its 90-day deadline to respond to its notice of allegations, likewise made it clear in a statement that it would not blindly accept the NCAA punishments.

“We are prepared to be accountable where we believe it is appropriate,” Chancellor Randy Woodson said, “and vigorously defend this great university and its athletics program where we feel necessary.”

Sounds a lot like the response from Kansas officials.

“It is a point that schools have made for many years,” said Gene Marsh of the Alabama law firm Jackson Lewis and chairman of the NCAA’s committee on infractions from 2004-06.

“When schools get on the wrong end of the gun,” Marsh said, “they often complain they are being singled out or used for a larger purpose. It really doesn’t matter. The NCAA penalty system provides no debit or credits should a decision-maker — a hearing panel or judicial body — think the school has been especially targeted.”

Among the charges leveled at Kansas on Monday were multiple Level 1 violations tied primarily to recruiting, a lack of institutional control and a responsibility charge Self will be forced to answer.

While the NCAA notice does not detail what the basketball program is accused of doing, Kansas was among the most prominent programs swept up in an NCAA probe into a pay-for-play scheme that began with an FBI investigation into apparel company Adidas. A former Adidas employee testified he made payments to the family of one recruit and the guardian of a current player, and text messages presented in court back up the accusation that Self and his coaching staff had a close relationship with the employee.

The school did not dispute some of the allegations, and Chancellor Douglas Girod said “we will accept responsibility for proven violations of NCAA bylaws.” But Girod also said his school would not accept the NCAA using it as an example in an era in which it, too, is under scrutiny.

“This unfounded belief comes up often when universities from the Power Five conferences are charged with NCAA rules violations,” he said.

Of course, that won’t stop name-brand programs from calling out the NCAA for perceived injustices, whether they are tied to academic fraud, recruiting or some other misconduct.

“We understand this is a unique moment in collegiate athletics,” Kansas officials said in a statement, “and we recognize the NCAA finds itself in a challenging position. But we don’t believe these allegations are the most appropriate way to address long-standing challenges in college basketball.”

Eagles’ Agholor invites hero who criticized him to a game