Charlotte is 41-point underdog at Clemson on Saturday 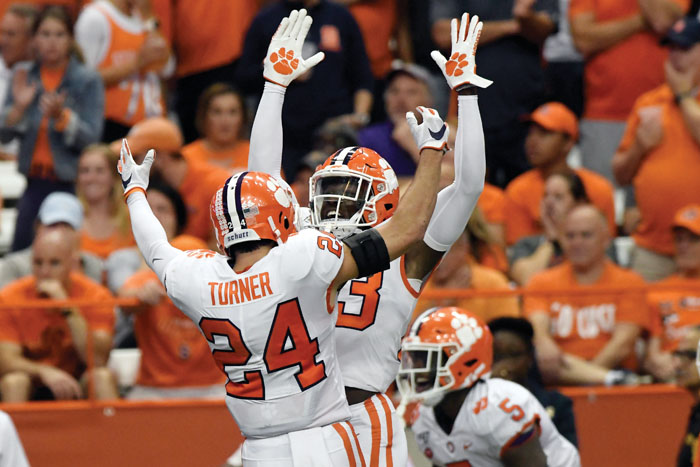 There is a strong temptation in college football to define teams early in the season, especially when a traditional power delivers a high-profile clunker.

That’s where No. 11 Michigan is as the Wolverines head into the first really big Big Ten game of the season. They face No.  13 Wisconsin in Madison on Saturday. Last we saw coach Jim Harbaugh’s team it was surviving an overtime scare at the Big House against Army.

As is the case with most blue blood programs — no pun intended — non-Michigan fans generally revel in the Wolverines’ every misstep. And with Harbaugh, the coach college football fans love to hate, rooting against Michigan has never been more popular. It’s as if everybody not wearing maize and blue is suddenly from Ohio.

As cringe-worthy as Michigan’s new-fangled offense was against Army, inspiring a litany of doom-and-gloom takeaways, the Wolverines can flip that narrative and renew the playoff talk they opened the season with by handling a bunch of Badgers who have yet to allow a point.

The first three weeks of the season have been light on games matching ranked teams. There have been just three, none last week. There are that many this weekend, plus a few other teams (No. 10 Utah, No. 12 Texas and No. 16 Oregon) that want to be thought of as playoff contenders facing potentially tough conference tests.

It’s getting late early for the Trojans, who have not lost to the Utes at the Coliseum since joining Utah joined the Pac-12 in 2011 … UTAH 28-24.

Falcons have played the Broncos well since they have been Mountain West rivals … BOISE STATE 35-24.

Tigers have two more sacks (14) through three games this season than they had at this point last season with one of the most decorated defensive lines in recent history … CLEMSON 49-7.

Southern Mississippi (plus 38½) at No. 2 Alabama

Tide QB Tua Tagovailoa has thrown at least four touchdown passes in a game eight times, a school record. He has started 18 games in his career … ALABAMA 56-14.

Another big game against an elite opponent that will be very difficult for the Irish to hang with … GEORGIA 35-17.

Commodores’ pass defense has been terrible and LSU QB Joe Burrow has been one of the best passers in the country … LSU 45-20.

Led by preseason All-America DE Chase Young (five), the Buckeyes are second in the nation with 14 sacks … OHIO STATE 49-7.

Tigers have won all three meetings in College Station since the Aggies joined the SEC … TEXAS A&M 24-22.

That matchup of Florida defensive line vs. Tennessee offensive line looks like a big advantage for the Gators … FLORIDA 28-10.

Longhorns have lost four straight in the series, so maybe they’re not really back until they take care of the Cowboys? … TEXAS 34-28.

UCF freshman QB Dillon Gabriel is averaging 11.6 yards per pass and has yet to throw an interception … UCF 31-21.

Cardinal have won three straight meetings, but the current version looks nothing like what we have become accustomed to under coach David Shaw … OREGON 35-23.

Progress would be keeping it close into the fourth quarter for the Bruins at this point … WASHINGTON STATE 38-21.

You know what, Cavaliers fans? Your team hasn’t been this good in so long, just go ahead of rush the field as much as you want … VIRGINIA 38-7.

No. 23 California (plus 2) at Mississippi

Cal has the look of a one-week wonder in the rankings … MISSISSIPPI 24-20.

QB Jordan Love and the Aggies have the No. 1 offense in the Mountain West; Aztecs are No. 2 in defense … SAN DIEGO STATE 28-27.

The wrong team might be favored here … APPALACHIAN STATE 28-24.

Every week is a referendum on the Seminoles now … FLORIDA STATE 31-23.

West Virginia (minus 4½) at Kansas —  @OKTXARPoke