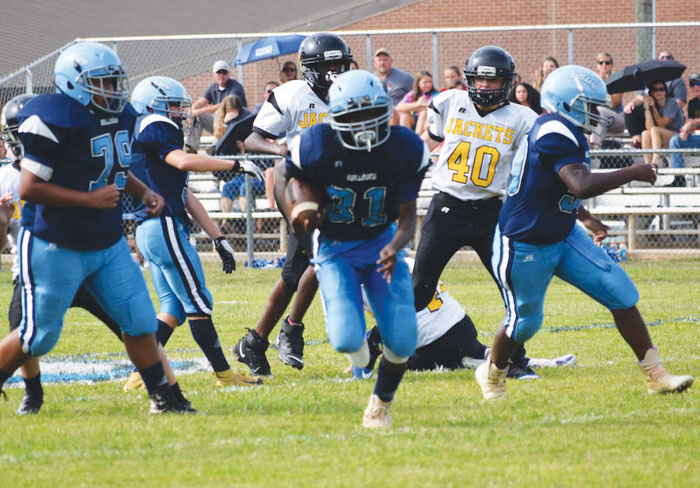 Submitted photo ... West Rowan Middle School’s Marquise Howell breaks into the clear during last Wednesday’s game against Corriher-Lipe. Howell rushed for 95 yards and had a 55-yard punt return for a touchdown, as West defeated the Yellow Jackets, 46-14.

The game was a battle of Corriher-Lipe’s air attack and the Bulldogs’ running attack. The rushing offense prevailed, as West improved to 3-0.

Six West runners combined for 355 yards, led by Marquise Howell, who rushed for 95. He also had a 55-yard punt return for a touchdown.

Charlee Williamson followed with 78 yards on the ground. He also recovered two fumbles, one which he returned 30 yards for a score.

Paving the way for those runners was a West offensive line that was led by center Blake Rogers.

The Bulldogs’ defense was sparked by Tyrin Little with seven tackles and White, who had six stops.

Corriher-Lipe quarterback Landon Richards was elusive on the ground and through the air — firing a touchdown pass to Dalton Young.

Marshall Faw also scored for the Yellow Jackets, and leading the defense was Mason Kincaid.