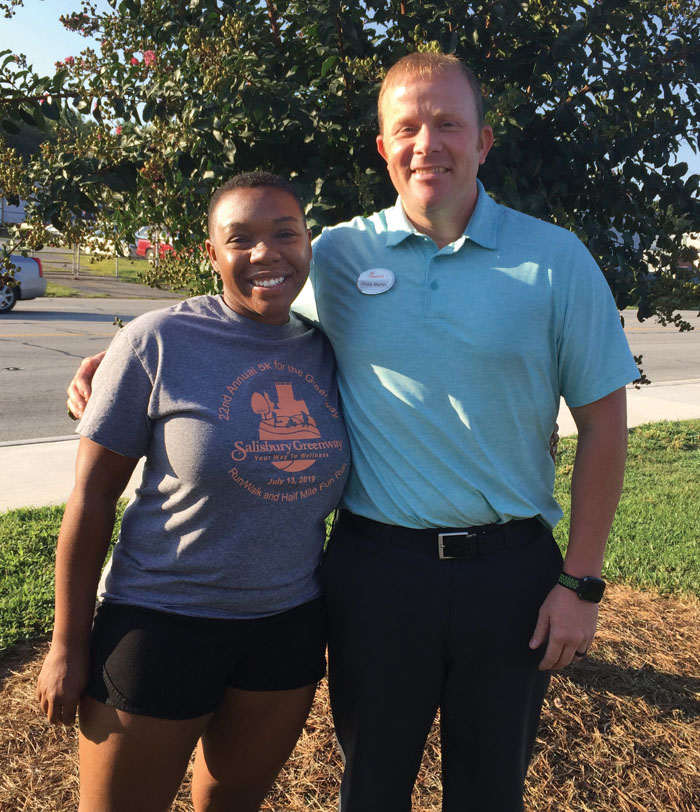 August had mixed results. Philip was injured playing basketball and Teri ramped her effort to the highest level yet.

I asked them both to describe August. Teri Shaw, who manages the City Park Recreation Center for Salisbury Parks and Recreation said, “August was steady. I had a made-up mind, a plan and action behind the two. August was steady! Some of my favorite classes are in the evening and so are kids’ practices which didn’t stop me. I take what I have learned in the classes and incorporate this into my workouts at home. I miss the atmosphere of the group but I’m still getting the burn!”

General manager at Chick-fil-A Philip Martin said, “This month I tried to add something new to my running and weightlifting and joined a basketball league. Just as I turned to run down the court, it felt like someone hit me in the back of my leg and I fell to the ground with a torn plantar fascia. The healing process has begun and I’m just getting to the point that I can somewhat walk without a limp. Rehab includes rebuilding and restrengthening the area.” Philip just resumed occasional light exercise.

When describing successes for August, Teri said, “Losing a few more pounds, more than the goal I set for the month. Running my best time on this past Thursday’s 5K when I just wanted to finish!”
Philip added, “This month I’ve found it became easier to control the amount and types of food I’m consuming. My body knows when I’m eating something that’s not good. At home, we eat at a more consistent time each day which helps with the early part of the next day. I’ve gone down another pants size which shows me we are on the right track.”

Something always needs improvement. Teri said, “Drinking enough water!! if I get 40oz a day, that was a good day. For some reason, this is still my challenge and I continue working on improvement! I can feel the difference when I don’t drink enough water versus the days that I do.”

Philip said, “At home, it’s still a struggle to meal prep with my kids starting back to school. We are all making healthier choices on a daily basis”.
Their short-term September goals are reasonable. Teri wants to lose five more pounds, keep rolling on the workouts and stay consistent with her eating. She said, “With the cooler months ahead comes the heavy, hearty “comfort foods” that can easily get me in trouble. I’m getting my mind prepped now to win against the comfort foods.”

Getting back on track is Philip’s immediate goal. With still a long way to go, he said, “I want to get back to where my foot can handle more of a workload through the rehab program with special orthotics in my shoes and begin more strenuous exercising. I want to handle an afternoon run again by the end of the month.”
Eight months are complete with four to go. I asked both Teri and Philip to think long term, at least through December’s end of the program. Teri said, “Remembering how hard I have worked to get here, the impossibles that became challenges that became routine and then became habits! I feel so much better, total well-being included. I want to drop out of the obese BMI category and am on track to do so.”

A net loss of at least 40 pounds is on Philip’s mind. He said, “I want to average 3 pounds each month. If my foot delays exercise, I’ll decrease caloric intake to counterbalance that loss. When or if I can get back to my exercise program, I’ll crush that goal. I’m excited to compare the January 1, 2019 and January 1, 2020 photo to see the difference. It starts with more goals reached in September.”
For August, Philip lost 4.5 pounds for a total loss of 37 pounds. Teri lost 5 pounds for a total loss so far of 47 pounds. Philip did his with diet and Teri has been working very hard and watching her diet.
My own goal is to have Philip again be able to join Teri for regular workouts. I’m excited for September’s results with momentum on the increase. See you at the end of the month!