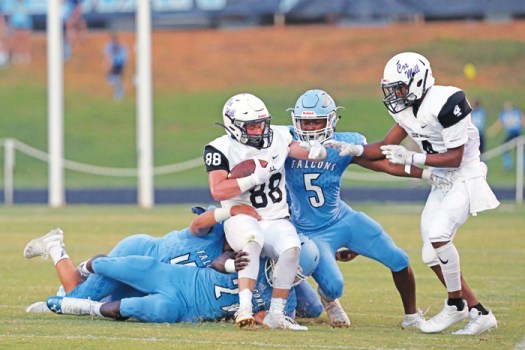 West Rowan’s #21 TK Lark and #41 Nathaniel Estrada hold up Cox Mill’s #88 while Reggie Everhart comes in to finish off the tackle. James Sipes for the Salisbury Post 9/6/2019 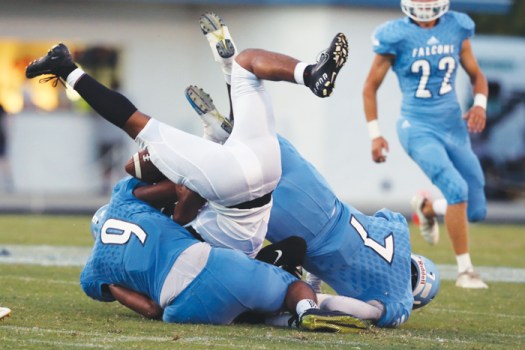 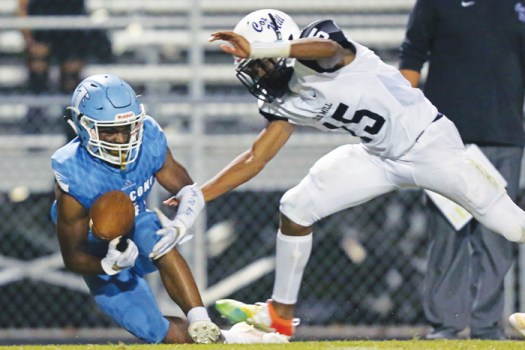 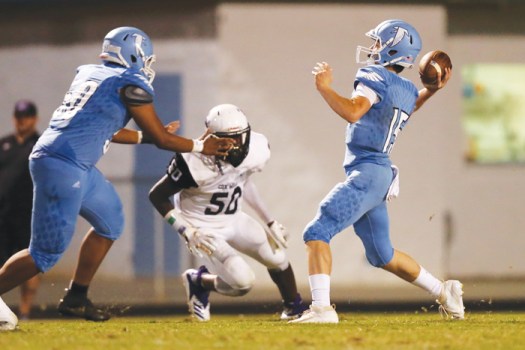 West Rowan’s #50 Josh Noble provides protection for QB #15 Noah Loeblein as he completes a 46 yard pass late in the game against Cox Mill. James Sipes for the Salisbury Post 9/6/2019 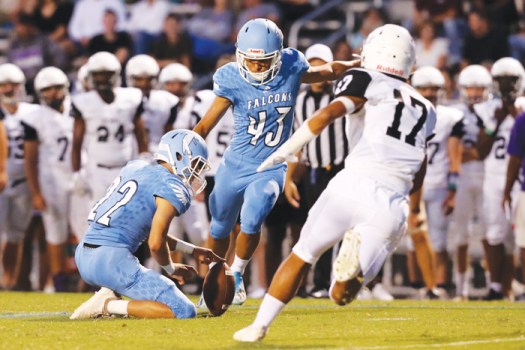 MOUNT ULLA — West Rowan had the bigger bodies, but Cox Mill made the bigger plays.

West Rowan’s linemen knocked Cox Mill silly for a half, but when push came to shove, the Chargers proved resilient. They exited with an impressive 28-13 road victory.

“We just made too many mistakes to beat a good football team,” West head coach Joe Nixon said glumly. “Too many turnovers. Too many missed opportunities. Too many empty possessions.”

West’s offensive game plan wasn’t complicated. The Falcons turned the field into Woodleaf Lanes in the first half, with 215-pound back Michael Gonsalves and his offensive linemen smashing like bowling balls and turning overwhelmed Cox Mill defenders into flying pins.

“We knew that’s what West would want to do,” Cox Mill coach Craig Stewart said. “West is so much bigger than us. They kind of invited us to put a lot of people up there, and then they were running right by us.”

By them, through them and right over them. Gonsalves was ripping off yards, 8, 9 or 10 at a time. By halftime, the bullish Gonsalves had trampled everyone not wearing light blue except the officiating crew and had amassed 147 yards on 20 carries.

“Everything was working great,” Gonsalves said. “I’d get the ball, I’d see a big hole, and I’d hit hit hard.”

West (1-2) possessed the ball most of the first half and out-rushed the Chargers 194 yards to 10. It was brutal. If it had been a boxing match, they might have stopped it.

But the really weird thing was that Cox Mill still led 14-13 at the break. West scored very early on a Noah Loeblein-to-Jalen Houston touchdown pass and added two Federico Cruz field goals after punishing Gonsalves-fueled drives, but the Chargers hung in there on the strength of a pair of big plays — Varney Farnhbullah’s 61-yard touchdown pass to a motoring Christian Henry and linebacker Aaron Jones’ pick-six on an unlucky ricochet.

While West was down a point at the break, the Falcons appeared physically dominant and a great bet to win the game. Battered and bruised, Cox Mill staggered to a halftime chat and regrouped.

“We’re not big, but we’re pretty quick,” Stewart said. “At halftime, we were able to make adjustments to help against their running game. West really hit us in the mouth early, but our kids were still saying at halftime that they could do it. Then, in the second half we did all the things we needed to do to win the game.”

The pivotal play of the night — even bigger than the pick-six — came on Cox Mill’s opening possession of the second half. An incomplete pass and a running play that was buried by West’s Levontae Jacobs for a gain of 2 brought up third-and-8 from the Cox Mill 42. On the critical snap, Farnhbullah, a tough lefty with some wheels, calmly delivered the ball to Henry, and Henry hit a crease and was gone. Just like that, Cox Mill led 21-13.

“All our plays are RPOs (Run/Pass Option) and our quarterback made a lot of good reads and was accurate with his throws,” Stewart said. “We’ve got receivers who are faster than they look, and when he hits one of them, there’s a chance for a big play. We need big plays.”

West lost a fumble on the kickoff following that touchdown and momentum swung for good.  West’s defense got a stop after Cox Mill pushed inside the West 5, but valuable minutes churned off the clock.

Another big pass play — this one from Farhnbullah to Luke Sutton — got another positive possession triggered for the Chargers late in the third quarter, and Jelynn Barnett’s scoring run made it 28-13.

“We had a couple of slip-ups tonight,” said West’s 6-foot-5, 300-pound defensive lineman Zeek Biggers. “But most of the night we did very well upfront.”

West had another deflating fumble on the kickoff return following Barnett’s score. Will Moseley’s interception stopped Cox Mill when it went for the knockout punch, but the clock had become Cox Mill’s ally. West could no longer just patiently hammer the ball between the tackles.

It didn’t get better for the Falcons in the fourth quarter. Cox Mill’s Wesley Poindexter intercepted a pass near the goal line to deny a promising West thrust, and Barnett broke a lengthy scamper to get Cox Mill out of the hole when it looked like the Chargers might have to punt from their end zone.

“We bit ourselves with all the turnovers and we left our defense on the field way too much in the second half,” Nixon said.

West had only 23 snaps in the second half, as Cox Mill (37 snaps) controlled time of possession and moved the chains with more frequency than the Falcons.

“We were still playing hard, still hitting hard in the second half,” Gonsalves said. “But every time we started to get into a rhythm, something would happen and we wouldn’t score.”

Gonsalves finished with 179 yards on 27 carries. Loeblein was only sacked once, and that was a coverage sack. He completed 10 passes for 129 yards. West made a concerted effort to get Houston more involved offensively and in the return game. He had four receptions and two nice kickoff returns to midfield.

Stewart, a South Rowan graduate, was elated with the victory in a contest that was considered a toss-up.

“West Rowan is good,” Stewart said. “We haven’t seen a better defense in scrimmages or in games. They’re too big to move and they don’t miss tackles. When you’ve got some speed and you can tackle you’ve got a chance to beat some people.”