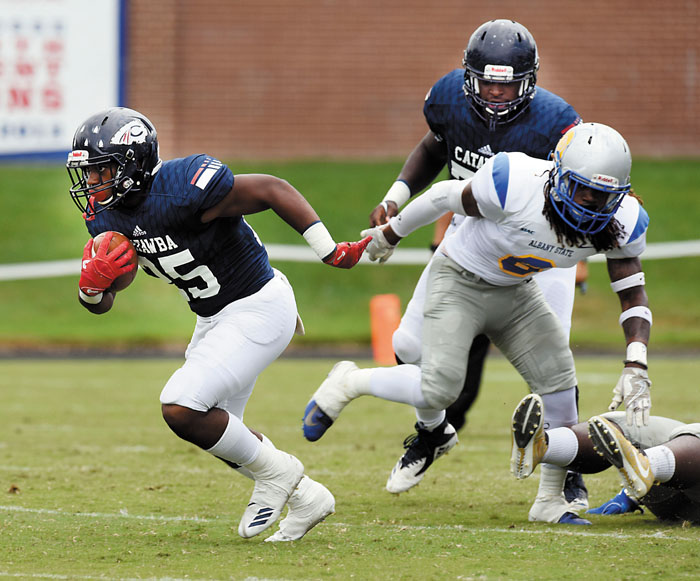 Kickoff against 15th-ranked West Georgia is at high noon, so Catawba will find out by about 12:15 p.m. how tight it is.  West Georgia will be good. It always is.

Catawba has opened against West Georgia three of the last four seasons. The results have been ugly — 44-13, 23-3 and 34-3 losses. That 34-3 score was last year in Carrolton, Ga., although Walker offered a rational explanation.

At Tuesday’s press conference, Walker presented three young men who will be expected to be leaders for his seventh squad. There was Ken Avent III, who earned the starting quarterback job last season as a redshirt freshman; Jeremiah Ferguson, a crunching linebacker who made 18 stops in the overtime loss to Carson-Newman, and Cris Page, a smooth and swift cornerback.

Avent, once baby-faced, is noticeably more confident, older, thicker and stronger. Ferguson looks trimmer and tougher. He looks like he’s been boxing Marines all summer. Page has added muscle. His arms look more like a linebacker’s than a corner’s. If these three are any indication,  Catawba won’t go 4-7 again.

“While it’s a lot of the same people, you’re going to see a more focused defense this year,” vowed Page, who had shoulder surgery in December but has fully recovered.

Ferguson came in as a mystery man last year, a transfer from North Greenville who once had been a Shrine Bowler in high school. He turned out to be a stud, a leader by example. By season’s end, he was first team All-South Atlantic Conference and everyone looked up to him.

“There are still some wrinkles to work out in the defense, but we’ll be fine,” Ferguson said. “We’re deeper and stronger. The biggest difference for me is that now I know our whole defense. I know what everyone’s job is, not just mine.”

Avent has instant name recognition because his father, Ken Avent Jr., was a star at Catawba, a quarterback who threw 33 career touchdown passes and was the 1993 SAC Offensive Player of the Year. He was a Catawba teammate of Walker’s.

“Ken is a lot like his dad was, has a lot of the same mannerisms,” Walker said. “Like his dad, he smiles in the most stressful situations and then has the actions to back it up.  His dad never got rattled, never got uptight, and Ken is the same way. You’ll never see him sweat. Our football team has rallied around him because of that calm demeanor. They have full confidence in him, and the coaching staff believes he can be special.”

Avent says he’s gotten quicker as well as larger since he came to Catawba, which explains how he has emerged as an effective running threat — he was Catawba’s No. 2 rusher behind Kenyatta Greene — to go along with his passing credentials. He doesn’t look all that big or all that fast at first glance, but he got a lot done last season as a rookie thrown into the fire.

“I’m a little stronger and more mature and I understand the college game better now,” said Avent, who didn’t turn the ball over at all during the preseason. “Things have slowed down for me quite a bit and we’ve got some good talent on offense.”

Some key offensive pieces are gone, including Greene, tight end Jourdan Osinskie and kicker Lee Brackman, but Avent expects breakouts from players such as back Demonte Good and receiver Chylon Thomas. Field-stretching burner Will Sweeper, a touchdown waiting to happen, is back, and that’s huge for Avent to have a big-play threat.

“Maybe I can break a few of my dad’s records,” Avent said with a smile. “I hope so.”

Walker explained that there’s limited preparation Catawba can do specifically for West Georgia because the Wolves generally bring in a number of talented transfers.

“That’s why most of our preparation has been about us,” Walker said. “We’re worried about Catawba, worried about being as good as Catawba can be. We feel like we’ve put a good foundation in place for this season and we’ll find out exactly where we stand on Saturday.”

It’s a key regional game. In 2015, both programs made the Division II national playoffs, with West Georgia reaching the semifinals. West Georgia made the playoffs last season and finished 10-2.