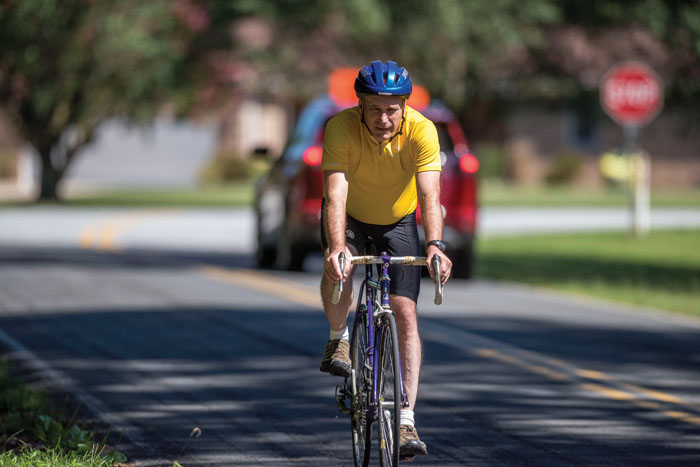 SALISBURY — Michael Broadway loves cycling long distances, but he’s not sure about his love for the Tour de Moore Classic 100-mile ride. Even though he is the only rider to have done the ride each of its 30 years, Broadway said.

“I look forward to it each year, but it fills me with dread when it gets close,” Broadway says.

The ride, no longer an actual race, is held on Labor Day and tours the perimeter of Moore County in the Sandhills of North Carolina. Broadway says the course was designed to be the hardest possible and it once attracted world-class racers. 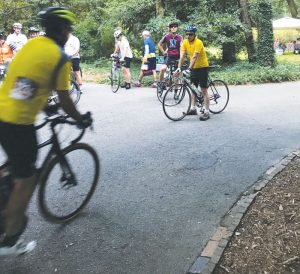 “The course is its own entity. The first 50 miles are challenging, but then the last half is brutal,” he said. “I learned to not get suckered in by going too hard during the first half, making sure to save some energy for the grueling second half. The finish is a half mile that’s almost straight uphill.

“The hill is so tough that each year, I consider getting off to walk it. I haven’t done that yet,” Broadway says.

Broadway’s course will have almost 3,000 feet of climbing.

Organized by the Sandhills Cycling Club, the Tour de Moore has 50-mile and 28-mile options. The 100-mile course includes Southern Pines, Pinehurst, Aberdeen and Carthage among other Moore County towns. It uses back roads for the most part.

All three races are fully supported, with help on the course if needed. All levels of cyclists, no matter the rider’s age or type of bicycle, are welcome.

Broadway first did the Tour de Moore in 1990 at age 19. Now at 48, he says, “I am some sort of a legend for the organizers. They know me, but some of them consider me a thorn in their sides, too. Early on, I could ride in the first third of the field. Now after some knee trouble, it takes me much longer to complete the course.”

Sometimes in recent years, the finish line has been packed up and hauled off by the time he got there.

“The post-race pasta buffet was also gone, but I got those folks to leave my food in my vehicle. They all know who I am,” he says.

Broadway’s ride began at 7:15 a.m. Monday, and about 400 riders did the course. One cycling club brought 40 members, and there was a large military presence from nearby Fort Bragg.

The epic course is a draw as is the 100-mile distance. The century ride has long been a standard goal for serious cyclists. Top riders will do the course in about four hours each year. Broadway had some early finishes in the five-hour range.

“Up front, it is a brutal training ride,” he says.

As a regular participant in long rides and races, a younger Broadway participated in eight to 10 events a year. By the time he had nine straight Tour de Moore races under his belt, there were no ongoing continuous streaks at the other races. Knee injuries were a factor when Broadway decided to concentrate on only the Tour de Moore.

The Tour de Moore has never been canceled, even with heavy rain. Broadway gets chilled but says he worries more that cars can’t see the riders. Some of the grades are long, and the course is loaded with lots of hills.

Past ride director Dan Kohn said, “It is always great to have Michael here. He says he is going to bring his shirts from 30 years, and we’ll use him to promote the event.”

Also a runner and swimmer, Broadway considers himself a cyclist most of all.

“I am a biking guy, that’s what I know,” he says. “My knees were injured in 1999 but have stabilized somewhat.”

Broadway was an early organizer and director of the Salisbury YMCA Triathlon and the Tour de Rowan, a similar cycling course held locally for several years. Battling intestinal problems and afternoon heat, Broadway finished the course Monday in 11 hours and 17 minutes.

Moore County had overcast skies early before most of the clouds gave way to afternoon heat.

Even after a tough ride Monday, Broadway plans to keep his streak going at the Tour de Moore.

“I feel compelled to keep doing it even though the course is so grueling. I consider myself fortunate to be the only person who has finished every year,” he said. “I show up at the same date and the appointed time and survive once more. I didn’t have to quit. Others have, but I’m still at it.”