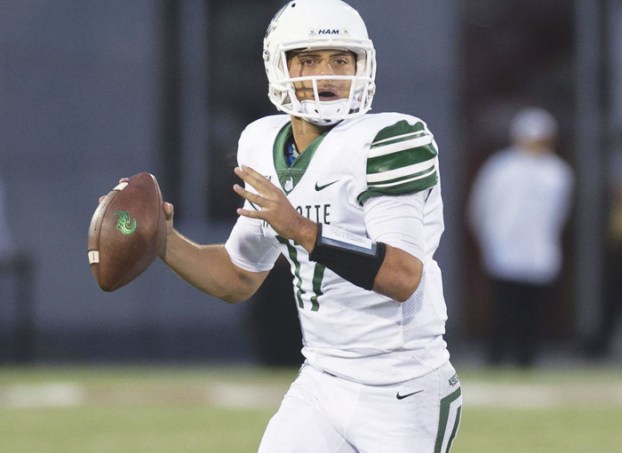 Reynolds stars as Charlotte opens with win over G-Webb

CHARLOTTE (AP) — Former Davie County High School star Chris Reynolds threw a touchdown pass and ran for two scores and Benny LeMay added two touchdown runs, giving new coach Will Healy his first win, 49-28 over Gardner-Webb in Thursday night’s season opener.
It was the first time Charlotte scored as many as 49 points in its FBS era. The 49ers were a FCS team from 2013-2014.
LeMay opened the scoring with a 1-yard run and Charlotte scored 28 second quarter points. Reynolds scored on a 3-yard run and threw a 3-yard TD pass to Aaron McAllister. B.J. Turner blocked a punt and Solomon Rogers returned it 16 yards for a score and LeMay’s 65-yard TD run made it 35-14 at halftime.
Reynolds, 14 of 20 for 136 yards passing with one interception, scored on a 1-yard run in the third quarter and backup Brett Kean (4 of 8 for 50 yards with two interceptions) hit Micaleous Elder on a 31-yard scoring pass in the fourth.
The Conference USA 49ers outgained the Bulldogs 508-219 in total yards and 322-159 in rushing yards, led by LeMay’s 120 yards on 16 carries. Defensive end Alex Highsmith had two of Charlotte’s five sacks.
Jayln Cagle scored on runs of 5 and 3 yards, Devron Harper returned a kickoff 99 yards for a TD and Dexter Brown scored on a 35-yard run for the Big South Conference Bulldogs.