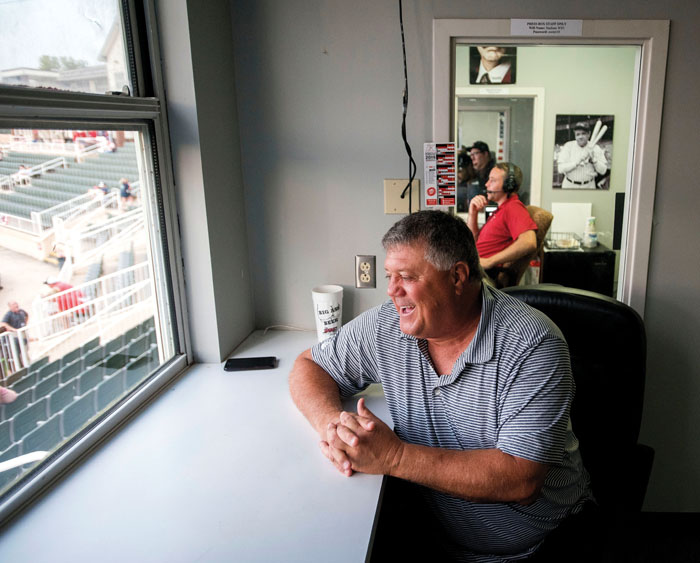 JON C. LAKEY/SALISBURY POST ... Former Kannapolis Intimidators team manager Tommy Thompson watches one of the last games at the Moose Road Stadium from the press box. The final game at the stadium for the Kannapolis minor league baseball team is set for tonight at 7:00. The team moves into a new downtown stadium next April.

Editor’s note: This is the fifth in a series of stories on the Kannapolis Intimidators’ final season at the Moose Road stadium.

KANNAPOLIS — Tommy Thompson could be found on the field for the 2011, 2013 and 2015 Kannapolis Intimidators’ seasons.

As the on-field manager, Thompson arrived to the Moose Road ball park at noon on game days. He would decide the lineup, organize the daily schedule, prepare for the game to start and simply hope for everything to flow — which was a good day.

“When you get a day like that, you want to hold onto that for a long time, but those are special days,” Thompson said. “They are. Normally, there’s always things going on.”

Following the 2011, 2013 and 2015 seasons, he would move up in the White Sox, sometimes taking Intimidators players to develop their careers further then return to Kannapolis to do it again.

The biggest memories are the way he is received when he returns to the stadium.

“The biggest memories are when I come back here now,” Thompson said. “The booster club is ‘Hey Tommy, how are you doing now.’ There are some fans that say, ‘Hey, I wish you were out there yelling at the umpire.’”

Thompson joked that he had some good memories with some of the umpires over the years. He was willing to back the players, even if it meant he would be thrown out of the stadium.

Today is the final game at the Moose Road stadium. Next season, the Kannapolis minor league team will be playing in downtown, with a new nickname and in a new stadium. Thompson is looking forward to the new stadium.

“I appreciate all the people who have come out over the years and watched baseball,” Thompson said. “The new stadium is going to be exciting. I can’t wait to watch a game in it and maybe coach a game in it. We’ll see what happens. And maybe even yell at an umpire.”

Thompson has seen the Winston-Salem, Birmingham and Charlotte teams move into new stadiums. He compared it to a family that is moving into a new home. The parent team White Sox are about to move into their fourth new house.

He sees a lot of opportunity and excitement with the downtown stadium, despite the emotions of the end of an era at the Moose Road location, like the fresh paint in the dugouts, updated locker rooms and possibly bringing out more fans.

“Even though, there are memories here, those memories will go with me to the new stadium too,” he said. “Managers have changed, players have changed, ownership has changed, but I think it’s a very positive future for the White Sox, for the Kannapolis team and the city area.”

Thompson has a lot to give back to baseball, which has given so much to him. In his early 60s, he has played baseball in college, signed with the Braves, signed with the White Sox and coached in the Chicago organization for 30 years.

“Being in baseball is a gift,” Thompson said. “It’s a blessing, and this is part of my journey.”

Through all the days of coaching what he considers the “hardest game to play,” and trying to make sure all the pieces of the puzzle fit together to develop players, Thompson is willing to do whatever for the sport that is needed.

“We owe the community and the game of baseball a lot,” he said. “It’s given me my life and I owe it my life, too. It’s given me a great life for years, and to me, for as much as I can return that favor, I think I’m responsible to do that in any capacity.”

Kannapolis will take on Hagerstown tonight at 7 o’clock, in the final home game of the season and last at the Moose Road stadium.