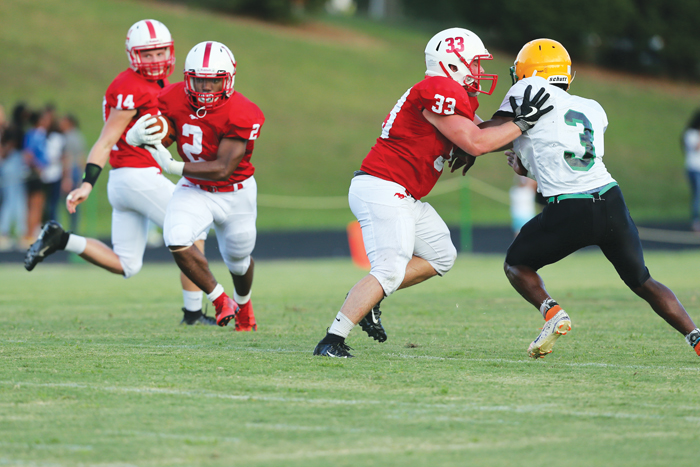 NEW LONDON — So far, so good for the East Rowan football team.

It took the Mustangs less than a quarter to get up to speed Saturday night — and they never let up, in a 33-12 season-opening win at North Stanly.

“I don’t like to make comparisons to previous teams, but I thought we were more prepared,” coach John Fitz said, moments after East used four first-half touchdowns to win handily. “We played adequate on offense, adequate on defense and special teams. But to get where we want to go, we’ve got a lot of things to fix.”

Allow Fitz to downplay a non-conference victory against a down-to-the-studs rebuilding team. But let the record show that junior running back Sammy Pinckney bumped and bruised his way for 147 yards on 33 carries. And that quarterback Logan Forbis looked confident in the pilot’s seat, completing six passes — including a pair of long touchdown throws to Cooper Wright, the wideout with a Maserati engine.

Defensively, cornerback Tahj Young had a declarative pick-six that sent a first-period message and teammate Quih’Mari McCall sent much of the umbrella-toting crowd home early with an interception midway through the final quarter.

Not to be overlooked was the work of freshman kicker Cole Eagle, who converted three extra points and two eye-opening field goal attempts in his varsity debut. “He’s got a leg,” Fitz noted. “And here’s the thing about Cole — he’s not near as strong as he’s going to be.”

North coach Scott Crisco was quick to applaud East’s effort. “Gotta give them the credit,” he said, after the Comets were limited to nine first downs and 189 total yards. “They’ve got a good offensive line and a good running game. And just when you think you’ve stopped the run, they beat you with a pass.”

Blame Pinckney, who actually apologized for his slow start. His first three attempts netted minus-10 yards, but set the stage for Forbis and Wright to connect on a 30-yard, over-the-middle touchdown pass, opening the scoring.

“(Forbis) has great vision,” Pinckney said. “He sees open receivers and puts it right on the dot.”

“Logan Forbis is coming into his own,” the coach said. “The main word to use for him is confidence. He’s got way more than he had last year. He understands the offense and what everybody is supposed to do. I’m very happy with the way he played.”

Of course, Wright did the leg work, using his sneaky-quick speed to free himself beyond North’s secondary on both TD plays. His second score came midway through the second quarter, after the Comets got a 2-yard TD run from beefy junior Christian Barber (25 carries/88 yards) to close within 13-6. This time Wright ran a post to the end zone, found some space and snagged a 33-yard touchdown pass from Forbis.

“So much of that is the front line,” said East tight end Jacob Daubenmire. “It’s the most important thing on offense. We’ve got to keep Sammy running because that’s what we’re best at.”

Young’s 30-yard interception return gave the Mustangs a 13-0 lead with 1:26 remaining in the first quarter. “It was a single receiver on my side, so I looked the quarterback (North’s Luke Shaver) right in the eye and he looked right back at me,” he explained. “I knew it was coming my way.”

East built a 27-6 halftime advantage when Forbis directed a seven-play, 67-yard scoring drive late in the second period. Key moments included a 15-yard personal foul penalty, one of 12 flags the Comets saw, and Pinckney’s 13-yard rumble to the North 18. On first-and-goal from the four, Isa’ah Cauthen bulldozed into the end zone.

Eagle, kid brother of former East lineman Hunter Eagle, kicked a 34-yard field goal in the third quarter and 44-yarder in the fourth.

“We’ve got things to work on,” Fitz concluded. “But we’re ok. This was a good start.”

NOTES: East had 247 total yards, including 159 on the ground. Forbis went 6-for-10 for 88 yards. .. Pinckney’s longest run was a 35-yard pickup in the second period. … McCall returned his interception 24 yards to the North 34. … The blunder-of-the-day came on North’s opening possession when a long-snap to punter Mac Barfield sailed well over his head for a 30-yard loss. … East hosts East Lincoln on Friday night.