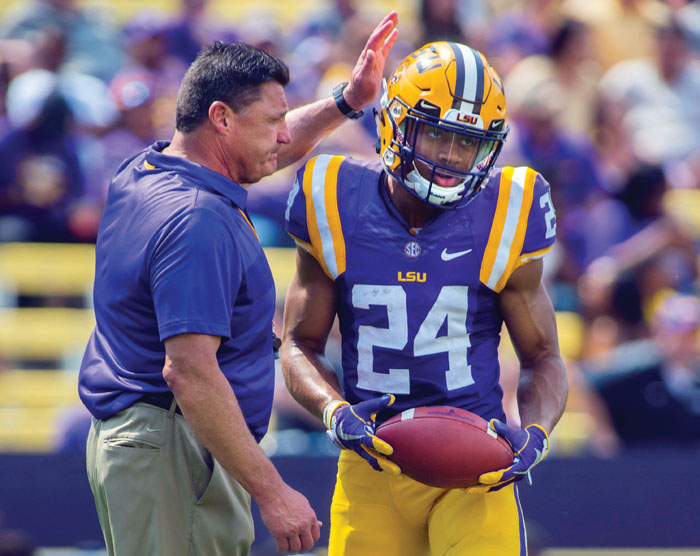 FILE - In this April 6,2019, file photo, LSU coach Ed Orgeron, left, gives freshman cornerback Derek Stingley Jr. (24) a pat on the head after talking with him briefly after Stingley fielded a punt during the NCAA college football team's spring scrimmage n Baton Rouge, La. Stingley was the nation’s No. 1 prospect in his class according to Rivals and was rated third according to the 247Sports Composite. Travis Spradling/The Advocate via AP, File)

There is a trickle-down effect from having true freshman quarterbacks star in the last two national championship games.

Clemson’s Trevor Lawrence capped his freshman season by leading the Tigers to a blowout of Alabama in last season’s College Football Playoff title game. One year earlier, it was Alabama freshman Tua Tagovailoa coming off the sideline to rally the Crimson Tide to an overtime victory over Georgia.

After seeing true freshmen shine in the postseason, coaches aren’t so hesitant about seeing what quarterbacks just out of high school can do at the start of a season.

At least three Power Five programs plan to open the season with a true freshman starting quarterback. Arizona State is going with Jayden Daniels, No. 16 Auburn has selected Bo Nix and Sam Howell is getting the majority of the first-team reps at North Carolina.

Those teams have decided a newcomer has enough potential to make up for any freshman mistakes.

“He’s not the savior, OK,” Arizona State coach Herm Edwards said after announcing Daniels as the starter. “I don’t want anyone to think that. He’s a freshman quarterback, like all freshmen are, and he’s going to do a lot of good things and sometimes he’s going to make some errors.”

Not all the notable freshmen across college football play quarterback, of course. Here’s a rundown of some freshmen who should make an immediate impact.

This former top-100 prospect verbally committed to Florida State in April 2018 but selected North Carolina during the December signing period after former Seminoles offensive coordinator Walt Bell left to take over Massachusetts’ program. North Carolina coach Mack Brown announced Sunday that Howell would get most of the first-team reps for the rest of preseason practices. Brown said the 6-foot-1 freshman’s consistency gave him an edge over redshirt freshmen Cade Fortin and Jace Ruder, who also have been competing for the starting quarterback job.

Daniels will become the first Arizona State true freshman quarterback to start a season opener for the Sun Devils, as he won a four-man competition for the job. The 6-foot-3 Daniels was rated as the nation’s No. 2 dual-threat quarterback and No. 35 overall prospect in his class according to composite rankings of recruiting sites compiled by 247Sports. He enrolled at Arizona State early enough to participate in spring practice. Arizona State is doubling down on youth at the quarterback position, as true freshman Joey Yellen opens the season as Daniels’ top backup.

Jackson enrolled at USC early and made a highlight-worthy play in the Trojans’ spring showcase by making a one-handed interception and scoring on the play. USC coach Clay Helton said afterward that the 6-4 freshman reminded him of New York Jets defensive lineman and former Trojans star Leonard Williams. Jackson was rated as the No. 56 overall prospect in his class according to the 247Sports Composite.

Nix is the son of Patrick Nix, who played for Auburn from 1992-95 and was the Tigers’ starting quarterback when they went unbeaten in 1993. He’s the nation’s No. 1 dual-threat quarterback and No. 33 overall prospect in his class according to the 247Sports Composite. He gained over 12,000 career yards and accounted for 161 touchdowns (127 passing, 34 rushing) at Pinson Valley High School to set Alabama state records in both categories. Nix, who is 6-2, beat out redshirt freshman Joey Gatewood for the right to start Auburn’s Aug. 31 season opener with No. 11 Oregon at Arlington, Texas.

Stingley was the nation’s No. 1 prospect in his class according to Rivals and was rated third according to the 247Sports Composite. He covered LSU’s top receivers and recorded an interception in the spring game. He likely will open the season as a starter and also could contribute as a kick returner. During spring practice, LSU defensive back Kary Vincent called Stingley “a once-in-a-lifetime player to play with and a once-in-a-lifetime player to see.” Stingley is the grandson of former New England Patriots receiver Darryl Stingley, whose NFL career ended after a head-on collision in a preseason game left him paralyzed. Stingley’s father played minor league baseball and Arena Football.

Whittington played wide receiver at Cuero (Texas) High School but moved to running back during spring practice and immediately won praise from coaches and teammates. Texas coach Tom Herman said it’s “one of the most amazing things I’ve seen in my 20-something years coaching is how a guy that’s never played a position before in his life took to it that naturally.” With incumbent starter Keaontay Ingram nursing a bruised knee during training camp, Whittington has had even more of an opportunity to make an impression. He’s the nation’s No. 34 overall prospect in his class according to the 247Sports Composite.

OTHER FRESHMEN TO WATCH