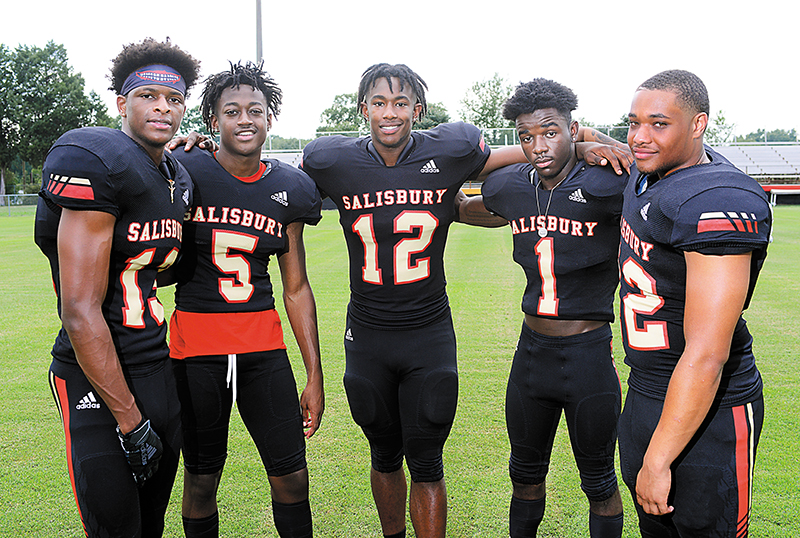 At Salisbury, there is reason for excitement, as the Hornets have key personnel returning on both offense and defense.

“We’ve got the ability and talent to have a good season … we’ve just got to cash in on it,” said Salisbury coach Brian Hinson, now in his third year. “We’ve just got to answer a few questions on the offensive line, but once we get those things ironed out, we’ll see where we stand. And I think our defense is ahead of our offense at this point, but that’s usually the case, early in the year.”

Salisbury was 7-5 in 2018, 7-3 after falling in its first two games of the season. The Hornets won their first four Central Carolina Conference games and finished 7-2 in the league (3rd place). They made the state 2A playoffs but lost in the first round to Ashe County.

Mike McLean returns after a 2018 campaign in which he totaled 1,871 yards (832 rushing, 1,039 passing) and earned All-County honors. McLean compiled most of those yards from the quarterback position, but he returns to running back this year. That should lead to an even bigger numbers on the ground.

“Mike will still see some reps at QB, but I think his natural position is running back,” said Hinson. “And I  think he’s excited about going back to that position.”

McLean gets to return to running back due to Vance Honeycutt’s emergence at quarterback. Honeycutt, best known for his baseball ability, was the jayvee QB last year, on the verge of moving up to the varsity when he literally grew too fast.

“Midway through the season, we were going to move Vance up, but he grew so much that he had a fractured growth plate in his elbow,” explained Hinson. “He couldn’t throw after that, but he did finish the season as a wide receiver.

“I don’t know if I’ve seen a kid grow as much as he has in one year,” continued Hinson. “Vance has gone from about 5-8 or 5-9 to 6-2. He’s healthy now and we’re looking forward to having him at quarterback. He’s a smart kid and processes the game well. If we give him enough time, pre-snap, he knows pretty quick where he wants to go with the ball. He’s a talented baseball player but he’s a talented football player as well.”

Honeycutt is also quick with an answer when asked why he wants to play football, even though UNC has already made him a baseball offer.

“There’s nothing like Friday night football games,” said Honeycutt. “I love football and you can’t match that adrenaline rush on Friday nights with anything else. Coach (Mike) Fox (UNC baseball) likes multi-sport athletes. And my dad (Bobby) played both sports at North Rowan, so my family is all for it as well. I’m excited about playing football this season, for sure.”

Protecting Honeycutt and opening holes for McLean is an offensive line anchored by senior Chad Van der Poel (6-0, 255), an All-County center and two-year starter. “Chad is smart as a whip,” says Hinson. “He doesn’t have many missed assignments in his game. He’s just a sound lineman.”

Along side of Van der Poel at left guard is two-year starter Carter Jenkins (6-1, 255), another senior. Tkaii Gaither, the right tackle, also returns. Hinson said that junior Wayne Wooden leads the candidates at left tackle while several are vying for the right guard starting spot.

The receivers — 2018 leaders Tyrone Johnson and Cam Gill have graduated — include seniors Patrick Taylor and Lawon Blackwell. “Patrick has a good skill set, kind of deceiving abilities, so people better not sleep on him,” said Hinson. “And Lawon is 6-2 now and can run and jump. He can take the top off a defense and gives us a deep threat.”

Senior Jabril Norman (6-0, 190), an inside linebacker, is a two-year starter, an All-County performer and the unit’s obvious captain.

“Jabril is a leader by work ethic and the pure intensity that he plays the game with,” said Hinson. “He should be really good for us. He’s already been offered by Catawba and I think he’ll hear from several others as well. A lot of FCS schools are interested. He’s just a great young man who works hard in the classroom and on the field.”

The other inside linebacker is also a senior returning starter — Jaden Hiligh (5-9, 200). Hinson praised his play from last season and also in last Monday night’s scrimmages against North Surry and Central Montgomery.

Hinson is also excited about the “Hornet” position on defense, which will be held down by super sophomore Jalon Walker (6-2, 215). Walker, son of Catawba head coach Curtis Walker, started as a freshman outside linebacker in 2018.

“Playing the ‘Hornet” won’t be a huge adjustment for Jalon,” said Hinson. “He’s got all of the movement skills and athletic ability and of course, all of the colleges are starting to take notice of Jalon. He’s going to be a great player out there for us.”

“It’s the first time since I’ve been at Salisbury that we’ve got some depth on the DL,” added Hinson. “We’ve got some size and some talent there as well. Zae is probably the leader there. He’s just a junior but started last year and played a lot as a freshman.”

Shellhorn moves to defensive end from outside linebacker. The senior “is 200-pounds plus and has good strength, so making that switch shouldn’t be an issue,” said Hinson.

Nick Hall, a sophomore, will also be spotted on the DL, a player Hinson calls “big and talented.” Another one junior Jacquez Peele, “a behemoth of a man,” according to Hinson. “Jacquez is 6-5 and weighs in about 330,” reports Hinson. “He’s actually lost 30 to 40 pounds since he’s been in the program, and that’s helped him become a lot more athletic. He’s worked hard to get where he is.”

Offensive stars McLean and Blackwell will see action in the defensive backfield as well, but the secondary will be anchored by returning seniors and starters Jadarius Wood and Donovan Corpening. Max Morgan is also in the mix at DB.

Soccer players Josh Portillo and Wade Robins are playing both sports this fall and competing for the place-kicking duties. Punter, according to Hinson, is still in the “open tryouts” stage.

Hornets at a Glance

Lost in first round of 2AA playoffs to Ashe County, 49-14

HS Football: East Rowan ready to pick up where…