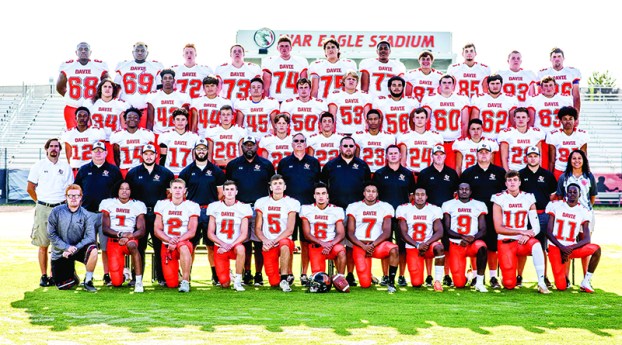 MOCKSVILLE — The 2018 Davie football season was something dark and unrecognizable. The War Eagles went 3-8 overall and 0-5 in the 4A Central Piedmont Conference.

Actually, the War Eagles were 2-9 on the field, the third win being a forfeit from Page.

But that’s in the past. It’s time for a new season. Fourth-year head coach Tim Devericks and new defensive coordinator Blaine Nicholson — who replaced David Hunt, who left to join DeVore Holman at Lexington — reshaped the defense and created a motto: “Effort Based Defense.”

“Our defensive focus is effort-based defense,” said Devericks. “We want to preach effort and effort and effort. You can control your effort; it’s our job as coaches to get you in the right place.”

This could be a sneaky team to follow, starting Friday night at War Eagle Stadium. How can you not be pumped about a bevy of skill guys on offense and a host of athletes in the secondary?  Davie is motivated by last year’s stunning fall, and a hungry team with lots of speed and athleticism is a dangerous one.

“We’re not going to forget about (2018),” said Devericks. “You use that experience to grow. Something’s going to happen to you in your life when you get knocked down. How are you going to respond? That’s been the message we’ve had with the kids.”

Last year, quarterback Nate Hampton showed flashes of dominant play. He left fans in awe when he rescued Davie with a 16-play, 80-yard drive against a North Davidson team that would win 13 of 16 games. He was good enough to post the 10th-best completions (124) and the No. 11 passing yards (1,417) in Davie’s season records.

But Hampton also left the 2018 season needing some polish. Because of his incredible physical prowess (6-foot-5, 225 pounds), it was easy to forget he was a sophomore with only one year of quarterbacking experience under his belt.

Hampton has sanded down rough edges, and coaches expect him to explode as a junior.

“Obviously, he has a huge arm, and I think he fell in love with that (last year),” Devericks said, of Hampton. “He’s come with an understanding to take what’s there, and those will eventually lead to big plays, because they will adjust their coverages to take (short passes) away.”

In 2018, Hampton finished 124 of 252 for 1,417 yards with eight TD passes and eight interceptions. With Davie trailing 14-13 to North Davidson and facing third down, he hit Jack Reynolds for an 11-yard TD with two minutes left to cap the 80-yard drive and finish with 243 yards and three TDs. In a 52-32 loss to Mooresville, Hampton threw for a Davie-sophomore-record 274 yards.

Alas, Hampton was plagued by injuries the second half of the season. At Reynolds, he left with a concussion. He missed the final two games against Reagan and East Forsyth with a broken hand.

Hampton’s big body is one that Division I programs crave — he’s received offers from West Virginia and Florida Atlantic — and he’s throwing rockets in practice.

Offensive coordinator Matt Gould: “He’s got to have one of the strongest arms in the country, I would guess.”

Davie has two freight train running backs returning — senior Josh Robinson and sophomore Tate Carney. It should be one of the best duos in the area. “One of the first points we made in the offseason as a coaching staff was … we’ve got to find more ways to get both of them on the field at the same time,” said Devericks. “It makes defenses play more honest and more leery of where either one of them are.”

Carney’s freshman numbers belied his youth and inexperience. He carried 112 times for 645 yards, a 5.7 average, and scored six TDs. Davie saw flashes of something special as he ran for 132 yards against West Rowan, 152 against Reynolds and 149 against East Forsyth. The do-it-all weapon threw a TD pass, had 445 receiving yards and made All-CPC as an athlete.

Reynolds parlayed nine of his 41 catches in 2017-18 into touchdowns. Last year as a sophomore, he led Davie in catches, receiving yards and TD receptions. That’s a heck of a start to a four-year varsity career.

It appears the skill positions are up to the task. Is the offensive line? No matter is more pressing than retooling the o-line at center, right guard and right tackle. The new starters at those spots are bound to experience some growing pains.

Expectations are sky high for the left side of the line. The alpha dog is Tanner Batten, a 6-2, 280-pound senior at left guard. The third-year varsity starter earned all-conference honors in 2018.

The fact that Camden Beck (6-1, 255) started on varsity throughout his freshman year brings instant credibility. The sophomore is a rising star at left tackle.

With hopes obviously very high for Batten and Beck, the War Eagles could make a surprise push in the CPC if they find stability at other OL areas.

On dense, senior Hunter Meacham has the talent to continue Davie’s tradition of producing terrific linebackers. “He’s got all the tools and the mentality,” Nicholson said, of Meacham. “He’s nasty. He likes to run around and hit people, and he can cover ground really well.”

Meacham (6-1, 190) oozes star potential after making 56 tackles as a varsity sophomore and 39 last year, when he tied for fifth in that category despite missing five games with an injury.

The defense has some big pieces to replace after losing the top two tacklers from 2018 in Matthew King and Peyton Hampton. The other linebackers — juniors Gage Recktenwald (25 tackles at safety last year) and Trevor Richardson (10) — are undistinguished on the varsity level. They’re looking to quickly change that.

The defense’s fortunes could rest with how effective the 6-foot-2 twins are in the middle of the trenches. Ben and Bishop Norman are beastly defensive tackles at 345 and 325 pounds, respectively. Ben became a consistent contributor as a junior, tying for fifth with 39 tackles and adding 13 for losses. Bishop (11 tackles) played a backup role.

The ends/edge rushers — senior Zach Smith (6-3, 186) and junior Avery Taylor (6-2, 200) — are looking sharp. Junior Ivan Poag, another defensive end, is a freak-show athlete. Last spring he was all-conference in the high jump and a state qualifier in the high jump and triple jump.

The secondary should be a strength. There’s tremendous athleticism even among the backups.

Davie has five guys (Matt Hill, Kristian Lyons, Isaiah Cuthrell, Justice Redmon and Justus Tatum) with varsity experience. Last year, as a sophomore, Lyons was fourth on the team with 55 tackles and first with three INTs. He’s a safety who made the all-conference team in 2018.

Redmon, a senior cornerback, is a third-year varsity player. He made 23 tackles as a sophomore, but missed seven games with an injury. Last year he had 34 tackles, 11 team-high pass breakups and two picks. He certainly looks like a star in the making.
Hill, a senior safety, is the top returning tackler (63, including eight for loss), and he was first with four fumble recoveries.

Cuthrell, a senior safety, is coming off 38 tackles and two INTs. Tatum, a junior cornerback, is yet another varsity returner.

Davie will have new starters at kicker and punter. After watching Skyler Schoppe convert 10-of-13 field goals in 2017-18, it’s time for junior Guillermo “Willie” Moure to take over. As a two-year backup, Moure went 8-of-10 on extra points.

Peyton Hampton handled Davie’s 61 punts in 2018, but he’s now a freshman at Army. The likely punter will be Carney.

By Marny Hendrick sports@salisburypost.com LANDIS – It has been a long time since the football glory days at South Rowan,... read more