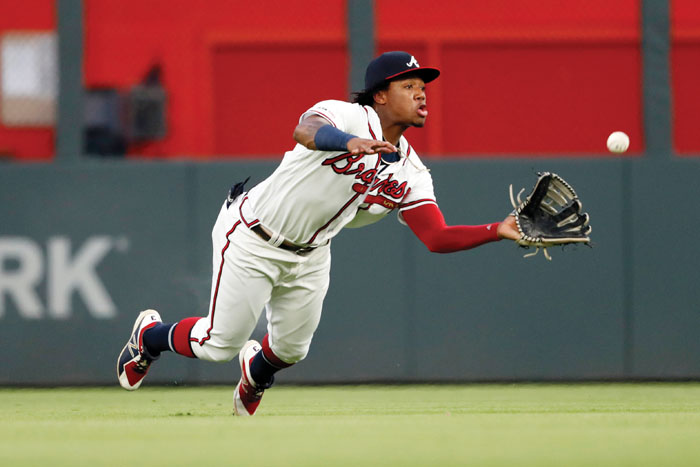 Atlanta Braves center fielder Ronald Acuna Jr. dives to catch a fly ball by Los Angeles Dodgers' Corey Seager with the bases loaded for the final out in the second inning of a baseball game Saturday, Aug. 17, 2019, in Atlanta. (AP Photo/John Bazemore)

By GEORGE HENRY Associated Press
ATLANTA (AP) — Josh Donaldson and Adam Duvall hit consecutive homers off Hyun-Jin Ryu in the sixth inning, the faulty Atlanta bullpen redeemed itself for a change, and the Braves beat the Los Angeles Dodgers 4-3 on Saturday night.
Donaldson stirred the largest crowd in SunTrust Park’s three-year history when his 29th homer landed in the Atlanta bullpen in right-center. Duvall added on by going deep into the left-center seats to make it 4-2.
Atlanta won the matchup of NL division leaders one night after the Dodgers’ powerful offense homered four times, sending the Braves to a 27th loss in the last 37 regular-season games between the teams. With their first win in five meetings this season, the Braves are trying to stand up to the club that eliminated them from the playoffs last year.
Ryu (12-3) lost for the first time in seven starts as his ERA, still best in the major leagues, rose 19 points to 1.64.
Sean Newcomb (6-3) turned in a promising performance after allowing consecutive homers the night before that left him with a 13.49 ERA in his last eight outings. He bailed out starter Mike Foltynewicz in the fifth, getting Edwin Ríos to fly out with runners at the corners.
Newcomb faced the minimum in 1 1/3 innings. Luke Jackson, who lost the closer’s job last month, allowed Max Muncy’s 31st homer before stranding a runner he walked in the seventh. Shane Greene, another former closer, struck out the side in the eighth. Mark Melancon earned his second save in two chances when Cody Bellinger popped up with a runner at first to end it.
Atlanta’s bullpen has been battered over the last two weeks with Greene, Melancon and Chris Martin — all acquired at the trade deadline to steady the relief corps — beginning the game with a combined 10.47 ERA in seven appearances apiece.
The Braves led 2-0 in the third on Ozzie Albies’ two-run double. Ryu, who had a streak of 15 scoreless innings snapped, struck out Donaldson to strand Albies at third.
Matt Beaty provided Los Angeles’ early offense, hitting his seventh homer to make it 2-1 in the fourth and lining a run-scoring single to make it 2-all in the fifth and chase Foltynewicz.
Foltynewicz labored through 4 2/3 innings on 107 pitches. He gave up seven hits and two runs.
TRAINER’S ROOM
Dodgers: Manager Dave Roberts said INF Jedd Gyorko will be activated Sunday and start at first base. Gyorko has dealt with back, hamstring and hand injuries this year and was on the 60-day injured list when Los Angeles acquired him from St. Louis at the July 31 trade deadline.
Braves: CF Ender Inciarte will miss four to six weeks after straining his right hamstring while running the bases Friday. Duvall, optioned to Triple-A the day before, replaced Inciarte on the roster.
GOING DEEP AGAIN
With two more homers, the Dodgers have connected 24 times over the last six games. Los Angeles leads the NL in home runs and set a major league record Friday with 22 in a five-game span.
SLICK GLOVES
Braves 1B Freddie Freeman snared Muncy’s liner in the first to double up Joc Pederson, who had reached on second baseman Albies’ fielding error. … Atlanta CF Ronald Acuña Jr. ran forward to make a diving catch and rob Corey Seager of a bases-loaded hit in the third. … Bellinger made a difficult running grab to save a run on Acuña’s lineout to center in the seventh.
BIG GATHERING
The Braves announced a sellout of 43,619.
UP NEXT
Dodgers: RHP Tony Gonsolin (1-1, 3.21 ERA) arrived Saturday from Triple-A Oklahoma City and will make his third career start in the series finale.
Braves: LHP Max Fried (14-4, 3.89 ERA) will try to win his sixth straight start. He has a 1.95 ERA over his last five. In two career starts against Los Angeles, Fried is 0-2 with a 7.50 ERA.
___
More AP MLB: https://apnews.com/MLB and https://twitter.com/AP_Sports