ACC football: It’s Clemson and then everyone else 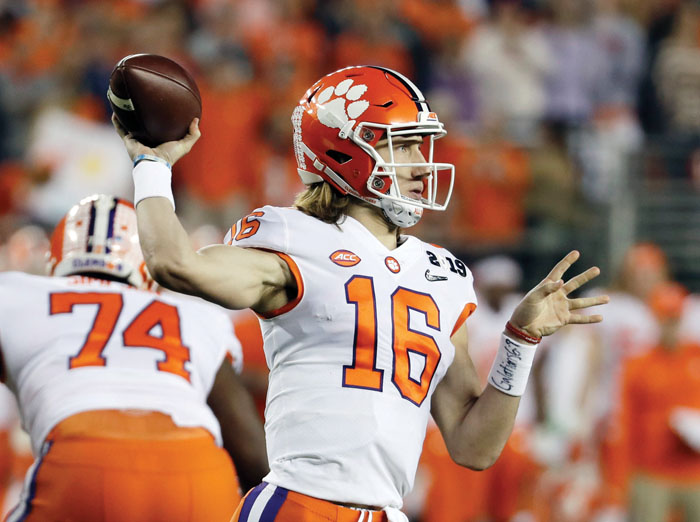 FILE - In this Jan. 7, 2019, file photo, Clemson's Trevor Lawrence throws during the first half the NCAA college football playoff championship game against Alabama, in Santa Clara, Calif. Sure, Clemson lost all four of its “Power Rangers” defensive line and seven starters on defense from its title team. But the Tigers’ offense, led by Heisman Trophy candidates quarterback Trevor Lawrence and tailback Travis Etienne, looks ready to operate at an even higher level than a year ago when it averaged 527 yards and 44.3 points a game. (AP Photo/Chris Carlson, File)

At least on paper.

Dabo Swinney’s program has risen to the top of college football, not just the ACC, during a multi-year tear. The Tigers enter the 2019 season with four straight ACC championships, the kind of domination last seen when Bobby Bowden’s Florida State teams romped through the 1990s with at least a share of nine straight titles.

They’re an overwhelming favorite yet again as they contend for a third national title in four seasons.

“Truly, we don’t carry everything over,” Swinney said, adding: “It’s always about what’s next. You’ve got to show up every year with something to prove.”

That mission now is becoming the first power conference team to win five straight league championship games. The strength will be on an offense led by quarterback Trevor Lawrence — the preseason ACC player of the year and one of 13 Tigers players making up nearly half of the 27-player preseason all-conference team.

With Clemson taking its place alongside Alabama as college football’s unquestioned top programs, the Tigers had only one close call last year:  a 27-23 home win against Syracuse after Lawrence was knocked from the game days after former starter Kelly Bryant decided to transfer. The Tigers won their other seven ACC regular-season games by an average margin of 40.1 points, beat Pittsburgh 42-10 in the league title game then blew out Notre Dame and Alabama to become college football’s first 15-0 team since the 1800s.

The strongest challenge could come from Syracuse within the Atlantic Division. The Orange won 10 games in Year 3 under Dino Babers and offer an immediate challenge by hosting the Tigers on Sept. 14. Syracuse is the last ACC team to beat Clemson, that one coming two years ago in the Carrier Dome.

On the other side, the Coastal Division continues to offer a bewildering amount of turnover at the top with a different team winning the title for the past six seasons.

Some other things to know about the upcoming ACC football season:

Atlantic: Clemson. The Tigers are 34-2 against league teams dating to the 2015 season with 26 wins by double-digit margins. Enough said.

Coastal: Virginia. The only team not to win the Coastal in the past six years is the preseason favorite Cavaliers, who return nine defensive starters from an eight-win team. “We have as good a chance as anyone on our side of the division to win this league,” Virginia coach Bronco Mendenhall said. “I don’t think it’s a stretch to say that. . Now, doing that is the next part.”

Trevor Lawrence, Clemson: The quarterback lived up to the hype as a freshman, throwing for 3,280 yards and 30 touchdowns with four interceptions.

AJ Dillon, Boston College: The junior running back is healthy after playing through an ankle injury last season, though he still ranked 13th nationally (110.8) and joins Etienne in giving the Atlantic Division the potential for some big rushing totals this fall.

Bryce Perkins, Virginia: The senior’s return is a key reason why Virginia is the Coastal favorite. He threw for 2,680 yards and 25 touchdowns while running for 923 yards and nine more scores.

For the second time in four seasons, the league will have four new head coaches with three in the Coastal Division:

Scott Satterfield, Louisville: The 46-year-old had a strong run at Appalachian State and now must rebuild a Louisville program that abruptly bottomed out under fired coach Bobby Petrino.

Geoff Collins, Georgia Tech: Collins arrives from Temple to replace Paul Johnson, who retired after 11 seasons directing a run-heavy option scheme. Now Collins is trying to reshape the offense while adapting to players recruited to the option scheme.

Manny Diaz, Miami: Diaz had left as Miami’s defensive coordinator to become Temple’s new coach, only to end up taking over the Hurricanes after Richt’s unexpected retirement.

Mack Brown, North Carolina: Tar Heels fans would love anything approaching Brown’s first stint in Chapel Hill, a decade-long run that included top-10 seasons in 1996 and 1997 before his 16-year run at Texas. He inherits a program that lost 21 of 27 games since November 2016 under former coach Larry Fedora.