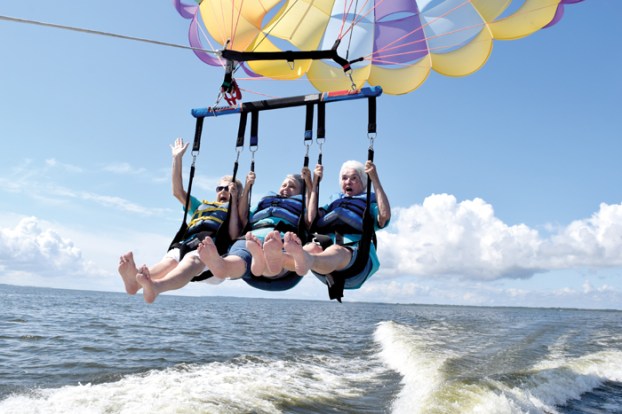 From that single question, a culture developed among residents with a little daring.

“If it’s at all possible, then we are going to try to do it,” Leonard said.

A resident recently expressed a desire to experience parasailing over the ocean. Leonard posted a sign-up list last summer with hopes of traveling to Wilmington to make it happen. The trip didn’t work out, but she found online resources that posted Duck, on the Outer Banks, as the best place in the region for parasailing.

Noting that the expense would be significant for such an adventure, Leonard sought sponsors and did a fundraiser with Carolina Panthers tickets. Things came together, and Leonard coordinated the logistics.

Flo Starnes, Jean Hinckley and Anne Hollifield were booked on a Christian Tours bus trip to the Outer Banks along with Genoal and Dillon Russell, who wanted to see “The Lost Colony” outdoor drama again, 50 years after they last saw it.

On the bus ride, the group interacted with other passengers as they visited the North Carolina Aquarium, the Elizabeth II, Cape Hatteras Lighthouse and Jockey’s Ridge State Park.

Leonard met the group in Duck and helped facilitate the extra activities for the Oak Park residents while the bus tour kept to its regular itinerary.

During “The Lost Colony” performance, rain fell but didn’t dampen the enthusiasm.

Then it was on to the original location of Duck Donuts, famous for unusual doughnut toppings and recipes, in search of a bit of energy before the big finale with Duck Parasail and Capt. Ed Jordan.

The flight was scheduled for this past Tuesday, with Starnes, Hinckley and Hollifield able to go up at the same time. They were originally scheduled for a 12-minute flight to an altitude of 500 feet. Capt. Ed told Leonard, “We are going to give them their money’s worth.” He extended the flight to 1,200 feet, the maximum possible.

For nearly 20 minutes, the three friends looked for sharks and marveled at the view.

“All we could do is fall in the water, and the captain said he would come get us if it happened.” said Hollifield.

“I had the feeling of flying,” said Hinckley

“We just glided through the air,” added Hollifield, who has macular degeneration.

Barefooted, the parasailers got dipped in the water, and Leonard suggested it was intentional.

Starnes was surprised at how long it took to come down from that height.

Hinckley, 76, admitted she was unsure about doing it in the first place.

“This was exhilarating and stimulating,” said Hollifield, who is 76. “I would recommend it to anyone. There is just no such word as ‘can’t.’ I was content for a long time afterward.”

“This was such a privilege,” said Starnes, 88. “As long as Oak Park will let us do things like this, we will.”

Hinckley’s children said, “Go for it, mom,” but Starnes’ kids vetoed the trip. They found out that Starnes participated after it was over.

Starnes has also flown in a World War II biplane and gone to iFly for indoor skydiving, all just since last October. Hollifield has gone horseback riding, ice skating and bowling; rode in a hot-air balloon; played the drums in a band; and went whitewater rafting.

Other activities have included learning to play the piano and a dulcimer, attending a prom, zip-lining, and riding in a helicopter.

Hinckley rides her bike almost every day on the roads around Oak Park, not a small feat.

Leonard said her goal at Oak Park is to create good memories each day, build relationships and help residents have fun along the way.

“We just want to make a difference with the residents in hopes that their time at Oak Park Retirement is remembered as one of the best chapters in their lives,” she said.