SALISBURY — Brian Miller previously announced that his current term on the Salisbury City Council would be his last, but with some encouragement from family, friends and a determined neighbor, he filed for re-election.

Miller, who has served on the council for five terms, is the longest-serving incumbent running for re-election. 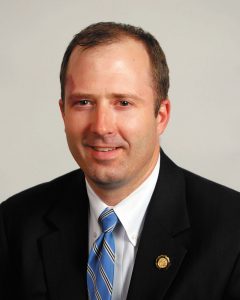 Miller said people urged him to continue his role on the City Council to work for a better future. He said he wasn’t expecting to have the passion to still serve, which is why he put his name on the ballot on July 19, the last day for candidates to file. But he noted this will be his last act of service to the Salisbury community as an elected official.

“I’m willing to do it one more time,” Miller said.

Miller, a banker at BB&T, is focused on economic development, business support for downtown Salisbury, continuing progress with the Empire Hotel redevelopment project and streetscape redesign.

He said he has seen progress with the city’s partnership with the Rowan County commissioners but would like to have regular communication between the city’s leadership and the Rowan-Salisbury Schools leadership.

Miller said education affects economic opportunity yet the city has no influence over the school board.

“How do the two groups work together to bring about positive outcomes?” he asked.

Miller, 50, said he appreciates the differences of opinion but does not think there should be surprises when bringing issues to the council.

He uses raw meat as an example, saying some things that are brought before the City Council are not ready for discussion because “it still needs cooking.”

He said Salisbury voters should support him if they are for economic development and are business-friendly. They also should be for a government that works well together.

“My name ought to be on that list,” Miller said.

Miller said through his years on the council and previous time on the Salisbury Planning Board, he understands processes. He recommends that others who want to serve on the council join the Planning Board. It taught him how to remain respectful and make the right decisions despite knowing an applicant.

He said the council doesn’t need to agree on everything and be focused on making unanimous decisions. All council members have a valid perspective, but Miller says sometimes the council members spend too much time repeating their views to someone whose mind is already made up and is no longer listening.

He says those who encouraged him to run commended him for being a positive influence and one who reasons well to bring the council to the right decision.

Miller said voters can expect him to be the same council member he is today if he is re-elected.

“I’m not going to be different tomorrow than I am today,” he said.