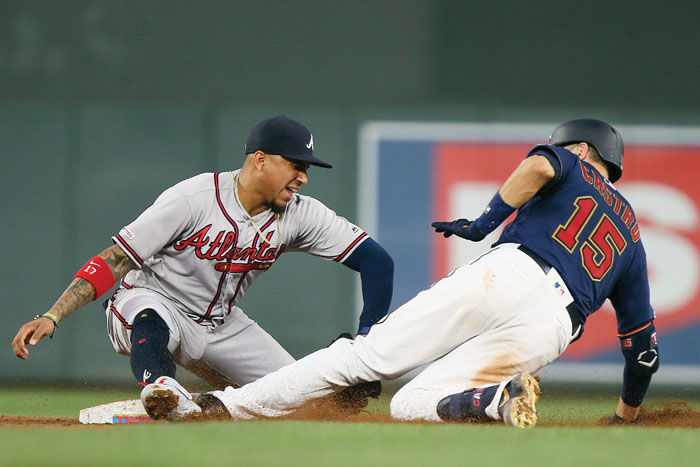 Atlanta Braves' Johan Camargo, left, gets out Minnesota Twins' Jason Castro at second base after catching the ball from right fielder Ronald Acuna during the fifth inning of a baseball game Monday, Aug. 5, 2019, in Minneapolis. (AP Photo/Stacy Bengs)

By BRIAN HALL Associated Press
MINNEAPOLIS (AP) — Miguel Sanó’s pinch-hit, two-run homer in the ninth inning gave the Minnesota Twins a 5-3 victory over the Atlanta Braves on Monday night.
Sanó’s 19th home run of the season went an estimated 443 feet off reliever Chris Martin, hitting high off the wall in center field.
Martin (0-3) was making his second appearance for Atlanta since being acquired at the trade deadline. He got two quick outs before allowing a single to Luis Arraez. Sanó then hit the first pitch he saw for the first pinch-hit, walkoff home run for Minnesota since 2006.
Trevor May (5-3) pitched two innings with one hit allowed for the Twins, who have won four in a row to stretch their lead over Cleveland in the AL Central to four games. They’ve won nine of their past 11 games.
The Braves have lost three of four and are 12-11 since the All-Star break.
Freddie Freeman hit his 27th homer for Atlanta.
Max Kepler followed with his 31st homer. Kepler has eight home runs in his past 15 games.
MORE ON DYSON
Twins reliever Sam Dyson, who was placed on the injured list on Sunday with right biceps tendinitis, said the injury dates back to a series in Colorado while he was a member of the San Francisco Giants. Dyson allowed six runs in two appearances for Minnesota after being acquired at the trade deadline.
“I had an issue in Colorado like the second series after the All-Star break,” Dyson said. “My shoulder started bugging me and I just kept throwing through it and throwing through it. I had contacted (Twins general manager Thad Levine) and let him know the other day. I was like, ‘We can either medicate it short term or we try to give it a break.’ It was up to him. Whatever he wanted to do, I was in for either one. He was just like, ‘It’s probably better off to give it a break.'”
Dyson made five more appearances for San Francisco after leaving Colorado. The plan is for the right-hander to take a few days off and then start rehab work later in the week.
TRAINER’S ROOM
Braves: OF Ender Inciarte left the game in the seventh inning for precaution with left quad tightness. . Manager Brian Snitker said he’s unsure if SS Dansby Swanson (right foot contusion) will join the team as it starts a series in Miami on Thursday. Snitker said Swanson will need at least one rehab game.
Twins: Willians Astudillo (left oblique strain) has started to hit but there is no timetable for his return.
UP NEXT
Braves: RHP Mike Foltynewicz (2-5, 6.37 ERA) will make his return to Atlanta’s rotation after being recalled from Triple-A Gwinnett. The 2018 All-Star is taking the spot vacated after Kevin Gausman was claimed off waivers by Cincinnati. Foltynewicz was 5-1 with a 3.86 ERA and 45 strikeouts in 51 1/3 innings for Gwinnett. The Braves will push LHP Max Fried to Wednesday to give him an extra day of rest.
Twins: RHP Jose Berrios (10-5, 2.80) will start for Minnesota. Berrios is coming off a start in which he allowed two hits in seven scoreless innings at Miami. He owned the third-best ERA in the American League entering Monday’s games.
___
More AP MLB: https://apnews.com/MLB and https://twitter.com/AP_Sports