NFL at 100: Bengals practice in Dayton, site of 1st game 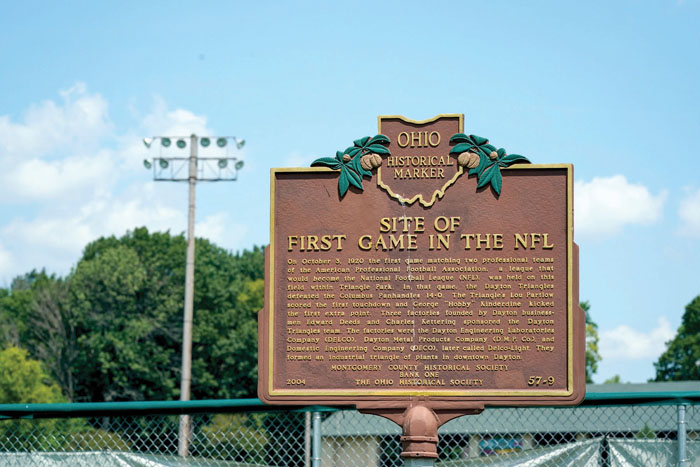 DAYTON, Ohio (AP) — What’s regarded as the NFL’s first game didn’t involve Lions, Bengals or Bears. Instead, the Triangles and Panhandles went at it on an October afternoon in a triangle-shaped park at the confluence of two rivers.

“They had a way with nicknames back then,” Cincinnati Bengals owner Mike Brown said.

The NFL returned to the scene of it first game Saturday — well, as close as it could get — as part of its centennial celebration. The Bengals made the hour-long drive north and held their first training camp practice at Welcome Stadium, located 3 miles from Triangle Park. An estimated 7,500 fans saw a scaled-back workout that lasted a little more than an hour.

The practice ended ominously for the Bengals, who are trying to escape last place in the AFC North. Receiver A.J. Green hurt his left foot or ankle while trying to make a catch and was carted off the field. Coach Zac Taylor had no word about the severity of the injury. Green was sent for an exam.

Cincinnati will hold the rest of its camp at Paul Brown Stadium.

The NFL traces its origins to the American Professional Football Association, which was formed at a meeting in Canton, Ohio in 1920. Jim Thorpe was president of a league that encompassed Ohio, Indiana, New York and Illinois. The first game between two league teams was played at Triangle Park on Oct. 3, 1920, with the Dayton Triangles beating the Columbus Panhandles 14-0 behind Lou Partlow’s two touchdown runs. The Dayton Daily News described Partlow as the “demon plunger” who got in shape by running through woods along the Great Miami River and ramming his shoulder into trees.

After more changes to bring consistency to the game, the league changed its name to the National Football League on June 24, 1922, with 18 teams, including Dayton and Columbus.

As it opens its 100th season, the NFL wanted “to do something really special in Dayton,” said Matt Shapiro, a league vice president. In addition to the Bengals making the trek north, the league sponsored a youth football camp at another Dayton park on Saturday where an artificial field will be donated by the NFL Foundation.

“The Bengals were close to Dayton, had practiced there before, so we wanted to bring it to life in some form,” Shapiro said. “We thought it would be a really special day in Dayton to not only have the Bengals practice at the University of Dayton’s stadium, but also hold a youth football clinic.”

“They gave us a chance to put some emphasis on the fact the NFL actually began in Dayton,” Brown said. “We think this is something people should know. It’s a great tradition. We want in some way to just acknowledge that, to signal this is where it all started.”

The practice in Dayton also got the Bengals some national attention, which is welcomed by a team coming off three straight losing seasons and a last-place finish in the AFC North. Plus, the trip up Interstate 75 was nothing new for Cincinnati: The Bengals practiced in Dayton in previous years, trying to build their fan base. The Dayton area has a Browns fan club, and the Indianapolis Colts are a two-hour drive west.

“We consider Dayton as part of our market,” Brown said. “The fans we think of as our fans. We want to reach out to them. We don’t want them to drift off and become Colts fans or fans of another team up north.”

“That kind of led me down a rabbit hole of even more history,” Taylor said. “I learned about the first trade, the first free agent, the first professional team and how this whole thing came about.

GLENDALE, Ariz. (AP) — Midway through Arizona Cardinals training camp practices, a snack cart is rolled onto the sideline. A horn sounds, the players stop what they’re doing and walk over to the cart, grabbing bites of fruit and drinks.

Camp Kingsbury has been a little different for the Cardinals so far.

Not only is the rookie coach implementing a college-style “Air Raid” offense, he has allowed players to take cellphone breaks during meetings to keep their attention sharp.

And then come the snacks.

The halftime snack breaks include bits of pineapple, cups of strawberries and power-boosting drinks, among other things.

The breaks are sort of like snack time in kindergarten — minus the milk cartons — only with a football purpose.

“A lot of it is player safety, hydrating and keeping those guys fed,” Kingsbury said. “I want to have a quick pause and then how do we pick up in the second half of practice coming out of halftime and finishing practice strong?”

So halftime is snack time in the desert.