Ledecky returns but US falls to Australia at world championships 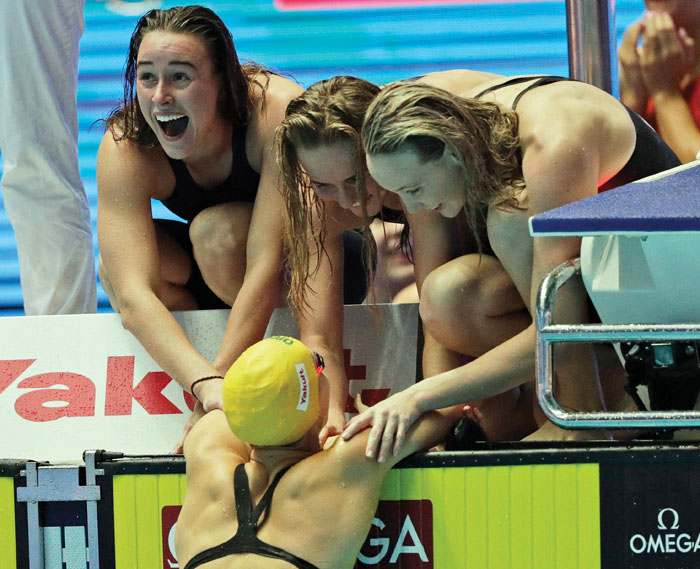 GWANGJU, South Korea (AP) — The Americans got ailing Katie Ledecky back. They just couldn’t overcome a world record by the Australians.

Ledecky returned after two days out of the pool while being sick to swim in the 4×200-meter freestyle relay. She rallied the U.S. to the lead on her second leg, but it wasn’t enough to defend the title from 2017.

Australia won in 7 minutes, 41.50 seconds at the world championships on Thursday.

Ariarne Titmus, Madison Wilson, Brianna Throssell and Emma McKeon took down the old mark of 7:42.08 set by China at the 2009 worlds in Rome during the height of the rubber suit era.

It was still a big night at the pool for the U.S. team.

The Americans medaled in all five finals, with Caeleb Dressel and Olivia Smoliga winning golds.

After swimming her four-lap leg, Ledecky sat down in a chair behind the blocks. She got up to cheer on Katie McLaughlin during the anchor leg.

Ledecky hadn’t competed since preliminaries on Monday. The following day she withdrew from the 200 free heats and the 1,500 free final because of symptoms that included dehydration and vomiting.

“We don’t know exactly what caused this all,” she said. “I wouldn’t have pulled out if it wasn’t serious or if I wasn’t concerned and scared and worried about my health.”

In the middle of a sleepless night, Ledecky’s phone pinged with a text from Michael Phelps. The retired 23-time Olympic gold medalist heard about her illness half a world away and was checking in.

“That meant a lot,” Ledecky said. “That gave me a little bit (extra).”

Her meet had gotten off to a rough start when she was upset by Titmus in the 400 free on the first night.

This time, Simone Manuel led off against the 18-year-old Aussie, with Titmus taking it out under world-record pace on the opening lap.

Ledecky put the U.S. in front before handing it off to Melanie Margalis, who led after 600 meters. That’s when McLaughlin chased against McKeon, who put the Aussies right back in front for good.

“Just touching the wall and seeing the three others celebrate, it made me so excited,” Titmus said. “I wasn’t thinking about a world record, that was the key.”

Ledecky’s lone remaining individual event is the 800 free, with prelims on Friday.

“That went a lot better than I expected, so I’d say 95% sure that I’ll swim tomorrow,” she said.

Watching from the stands was Lilly King, who was disqualified from the morning heats of the 200 breaststroke and lost an appeal to be reinstated.

The American was penalized for not touching the wall with both hands in a simultaneous motion in the first turn of the four-lap race.

It was a big blow for King, the outspoken doping critic aiming for a sweep of the breaststroke titles in Gwangju. She already won the 100 over Russian rival Yulia Efimova, who advanced to the 200 final as the fastest qualifier.

“It hurt really bad to be honest,” he said. “You don’t always get that magical feeling every night but you’ve just got to shut the brain off and go.”

“It took 100% effort and I had someone right there on my tail for me to race,” Dressel said. “I kind of shut off thinking about the race so that helped a lot and having Kyle right there.”

Dressel tied for quickest off the starting block and held off a challenge from Chalmers in the closing meters to defend the world title he won in 2017.

Dressel hopped on the lane rope, tossing his head back and his legs out in front of him in celebration.

Dressel’s other golds came in the 50 butterfly, a non-Olympic event, and the 4×100 free relay. He took silver in the mixed 4×100 medley relay.

In the women’s 200 butterfly, Boglarka Kapas of Hungary won in 2:06.78. U.S. teammates Hali Flickinger and Katie Drabot took silver and bronze, respectively, after coming in as the top two fastest qualifiers.

In the semifinals of the men’s 200 breaststroke, Matthew Wilson of Australia equaled the world record of 2:06.67. His time matched the mark set by Ippei Watanabe of Japan in January 2017. Watanabe finished third in the same heat.