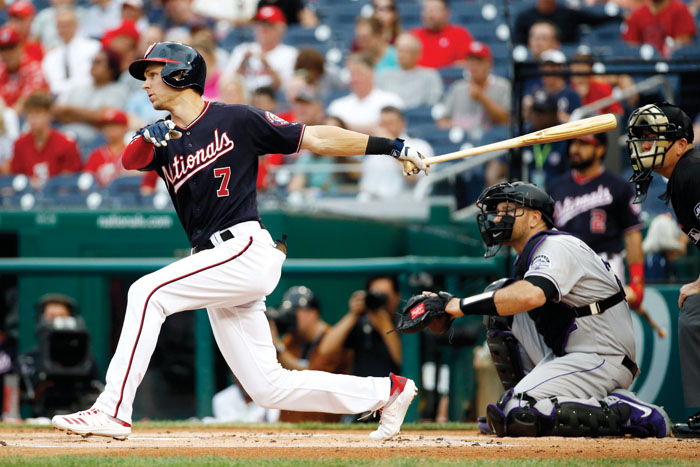 ST. PETERSBURG, Fla. (AP) — Christian Vázquez hit a tiebreaking home run in the seventh inning, Marcus Walden bailed Boston out of a bases-loaded jam in the ninth and the Red Sox beat the Tampa Bay Rays 5-4 on Tuesday night to move into second place in the AL East for the first time since the second day of the season.
The defending World Series champions have recovered from a 3-8 start and improved to a season-high 10 games over .500 at 56-46, moving one percentage point ahead of the Rays (57-47), who have lost seven of eight.
Vázquez snapped a 2-2 tie with his second career pinch-homer, a drive into the left-field seats off Colin Poche (2-4).
Boston boosted the lead to 5-2 in the eighth when Andrew Benintendi hit an RBI groundout and Jackie Bradley Jr. was hit by a pitch from Adam Kolarek with the bases loaded, forcing in a run.
Ji-Man Choi’s had a run-scoring single off Brandon Workman in the ninth. Walden entered with the bases loaded and two outs, walked Tommy Pham on four pitches, then retired Austin Meadows on a game-ending groundout.
Chris Sale (5-9) allowed two runs on Travis d’Arnaud’s third-inning homer and limited the Rays to just three other hits. He struck out 10 over six innings.

ROYALS 5, BRAVES 4
ATLANTA (AP) — Lucas Duda delivered Kansas City’s first pinch-hit homer of the season to break a tie in the eighth inning, and the Royals beat NL East-leading Atlanta.
Alex Gordon also homered for the Royals and drove in two runs.
Starters Dallas Keuchel of Atlanta and Danny Duffy of Kansas City went six strong innings with double-digit strikeouts but didn’t factor in the decision. Keuchel allowed just three hits and struck out 12. Duffy surrendered one run on five hits with 11 strikeouts.
Ian Kennedy gave up three straight singles to start the ninth but bounced back for his 18th save.
Ronald Acuña extended his career-best on-base streak to 28 games when he was hit by a pitch in the third.
METS 5, PADRES 2
NEW YORK (AP) — Robinson Canó hit three home runs, leading Jason Vargas and New York over San Diego.
The 36-year-old Canó drove in all five runs and went 4 for 4. Vargas pitched one-hit ball for six shutout innings.
Canó homered three times in a game for the first time in his career. It was just the third three-homer game ever by a Mets player at home — Lucas Duda and Kirk Nieuwenhuis both did it in July 2015.
After singling in the first, Canó hit a two-run homer off Chris Paddack (6-5) in the sixth and a two-run shot in the seventh off Logan Allen.
Vargas (5-5) put on a pitching clinic. He permitted only a single by Eric Hosmer in the fifth, struck out eight and walked three.
Edwin Díaz relieved with two on in the ninth and got his 22nd save in 26 chances.
CARDINALS 4, PIRATES 3
PITTSBURGH (AP) — Paul Goldschmidt homered for the second straight night, José Martínez added his 10th home run and Dakota Hudson rebounded from a shaky start to lead St. Louis past Pittsburgh.
Goldschmidt delivered a two-run drive in the third inning off Chris Archer (3-7). Martínez put St. Louis in front with a solo shot leading off the fifth, and Hudson and two relievers shut down the Pirates after spotting Pittsburgh a 3-0 lead.
Hudson (10-4) surrendered a Starling Marte homer and then settled down. The 24-year-old rookie worked 6 1/3 innings, giving up six hits and three walks. Giovanny Gallegos and Andrew Miller retired the last eight Pittsburgh batters, with Miller throwing a perfect ninth for his third save.
Pittsburgh fell to 2-9 since over its last 11 games, with four of the losses to St. Louis.
BLUE JAYS 2, INDIANS 1
TORONTO (AP) — Justin Smoak tied the game with a homer in the ninth inning and knocked in the winning run with a two-out single in the 10th as Toronto beat Cleveland.
Smoak got the winning hit off lefty Tyler Olson (1-1), scoring Eric Sogard.
Toronto’s Ken Giles (2-2) pitched one inning and earned the win.
The Indians carried a three-hitter into the ninth before Smoak spoiled the shutout bid, homering with a one-out off closer Brad Hand, who squandered a save opportunity for the second time in 29 chances.
Adam Cimber got the first two outs in the 10th inning. Olson came on and walked Sogard, who advanced to second on a wild pitch. Sogard moved to third on an infield single by Freddy Galvis and scored when Smoak singled off the glove of a diving Jose Ramirez at third base.
Blue Jays starter Aaron Sanchez allowed one run and five hits in five innings.

MARLINS 5, WHITE SOX 1
CHICAGO (AP) — Caleb Smith retired his first 17 batters and cruised through seven innings of two-hit ball, and Miami beat Chicago.
Curtis Granderson hit a two-run homer to cap Miami’s four-run fourth inning against Dylan Covey (1-6). Harold Ramirez added a solo shot in the fifth as the NL-worst Marlins ended a four-game skid.
Smith (6-4) worked perfectly through a depleted White Sox lineup before walking Adam Engel and Leury García with two outs in the sixth. Jon Jay followed by grounding a single to right for Chicago’s first hit and only run. Smith struck out nine — including five straight over the fifth and sixth innings.
Covey allowed five runs and six hits through six innings.
Relievers Nick Anderson and Jarlin García each tossed a perfect inning to close it out.
NATIONALS 11, ROCKIES 1
WASHINGTON (AP) — Trea Turner hit his second career cycle, Stephen Strasburg earned his major league-leading 13th win and Washington routed Colorado.
Turner led off the first with homer, singled in the second and tripled in the fifth. After grounding into a double play in the sixth, he doubled home a run during Washington’s eight-run seventh.
Strasburg (13-4) pitched six innings for his sixth straight win. He allowed three hits and two walks while striking out eight.
Colorado rookie Peter Lambert (2-2) gave up three runs and nine hits. He struck out eight with a walk for the Rockies, who have lost seven of eight.
Nationals catcher Yan Gomes had two hits, including an RBI single in the sixth. Strasburg singled his first time up, giving him hits in four straight at-bats.
___
More AP MLB: https://apnews.com/MLB and https://twitter.com/AP_Sports