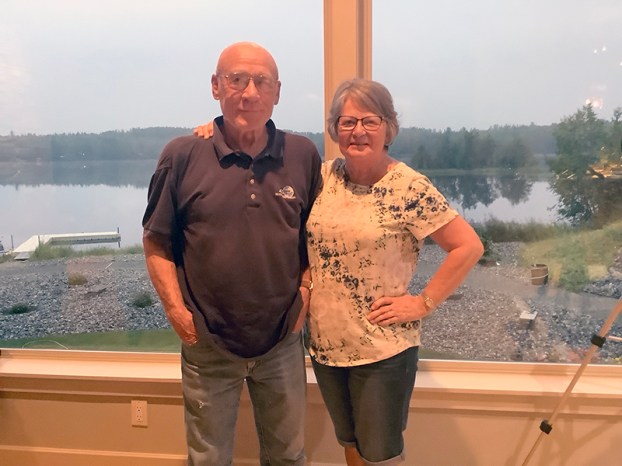 Frank and Janice Ramsey live in Alaska now, but Frank grew up in Salisbury and played football for Boyden. He also was an Air Force pilot in Vietnam.

Near the end of yesterday’s ride, two people told me that today’s pedaling would be no fun at all while another didn’t agree with them. With two days remaining, I hoped they would just have different opinions of a not so bad course.
I left from the Nelchina Lodge after a great sleep, noticing that the wind was strong from the north first thing. Sometimes up here, the wind blows pretty good in the morning and changes around. Once in a while, it just dies down.
This one didn’t die down until late afternoon.
My recent riding has been on the Glenn Highway, which turned off the Alaska Highway back at Glennallen, Alaska. The Glenn has some beautiful scenery for sure and some really big mountains close to the road.
The smoke still made things hazy, and the tall mountains were obscured.
One of the highlights of the day was the Metanuska Glacier. People along the Glenn, who mostly seem to be tourists, drive lots of RVs, and there are plenty of places to stop and get photos. The glacier was one of the most popular, but I couldn’t get real close.
The glacier stretches about 27 miles long and gets credit for starting one of the biggest rivers with glacier runoff. Several companies have businesses that fly over or drive to the glacier. One has pizza for glacier watching. The glacier has remained fairly stable for 400 years and is 4 miles wide at its terminus.
Past the glacier, the road shoulder disappeared, and I knew immediately what folks who called this a bad road were talking about.
Two inexperienced motor home drivers passing each other and an occasional tractor-trailer made for tight spaces on a narrow, winding road. The road had not been like this since this adventure started. There was little room for a bike.
I had mentioned a Rowan County connection in the area. Frank Ramsey, who played football at Boyden High School, left home after graduation to join the Air Force and eventually became an airplane pilot in Vietnam. After his service, Frank married Janis, from Iowa, and they moved to Alaska, living between Palmer and Wasilla.
Frank is a professional hunting guide and has the hides to prove it. He doesn’t pedal away from the bears like I do.
I had dinner and spent the night at the Ramseys’ beautiful Frank Lloyd Wright-designed house. Janis made vegetarian dishes, and we talked until way too late. I kept trying to break away, but we started talking again about something mutually interesting.
When I tried to start writing at almost 11 p.m., it was simply too late. My eyes would not stay open.
I was too tired to take a shower after 73 painful miles. Frank came and picked me up at a certain mile point and planned to take me back there for the start of the final day.
Janis makes great rhubarb cake. She loves Salisbury and looks forward to returning later this year for Frank’s 60th reunion.
Tomorrow should be the last day of the ride. I want to get to Anchorage in time to find the visitors center and clarify some train and ferry ride information and get some help finding a room for the night.
It is exciting to know that the conclusion of the ride is upon us. No doubt, your prayers and email comments played a big part. But let’s wait till it happens.
David Freeze is a Salisbury Post contributor who is biking from Nevada to Alaska. He can be reached at runner.david.freeze@gmail.com while on his journey.
You Might Like

As I watched the Trump rally in Greenville, it brought to mind films of the Nazi and fascist rallies in... read more