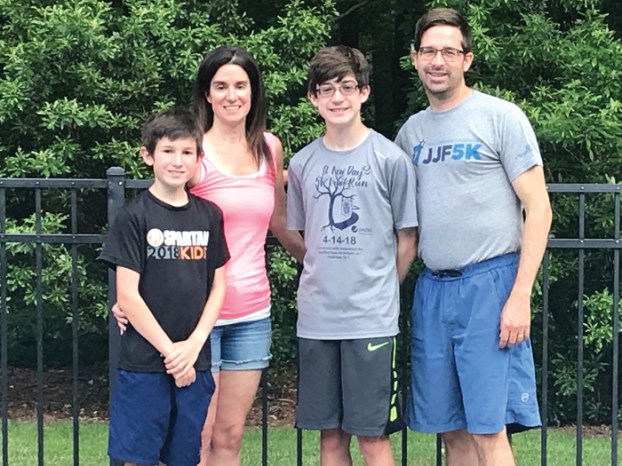 It always does my heart good to see a whole family running together. One of the most active locally is the Price family: Stan, Jody, Jackson and Connor. Here is how they got started.
Stan ran at Mooresville high school, then inconsistently in his 20s and early 30s. With the late 30s came more running and triathlons — Earle Koontz’s fault. He watched the Buck Hurley Tri once and was hooked, then worked up to an Olympic distance tri.

Jody didn’t start running until her late 30s, completing her first 5K at the 2011 Bare Bones in 35 minutes. She was the first to do any real distance racing, doing the Rock-n-Roll Series Half Marathon in San Diego with the Leukemia and Lymphoma Society, Team in Training group. Jody has now done four half marathons and Stan has done two.

Jody is an accountant who works from home for a Charlotte CPA firm while Stan is a social worker who spent 20 years in corrections, then at social services, and is now with a large group home with a campus full of teenagers and foster homes.

Connor, 12, and Jackson, 16, played baseball, basketball, tennis, soccer and participated in scouting. Then they got involved in running. Stan said, “As a family, we can all do it together. We help run with the YMCA Warrior kids when they are spread out all over a park running trails. With all of us running different paces, each of us is chasing the clock, our own goals, and some of us are just running from age.”

Both boys started doing fun runs and by age 7, Connor trying to keep up with his big brother, ran his first 5K. Jackson probably did his first 5K at age 9. They just had a knack for it.
Connor had a heel injury last year that kept him from competing in his middle school conference after a great 6th grade year and is trying to get back. His goals are to keep improving and chasing those PRs. Jackson really took off for Carson’s solid cross country team.

While the family attends races often, usually its just a couple of them doing the running. Stan said, “We enjoy watching and pulling for one another. We decide who wants to run and who doesn’t. At the Foot Pursuit 5K where Jackson volunteered, Jody and Connor raced. It just depends on what appeals to us. Is it a fast course and one is chasing a PR, or is it a beach run that is different or a trail run?”

I asked each for best memories. Stan said, “Watching our kids improve and pulling for the kids from the Warriors on other teams. It’s never about winning; it’s about running your best time. I enjoy the Olympic distance tri and love 8Ks, the best distance for me.”

Jody loves watching the kids run and enjoys seeing the running community. She said, “Seeing people simply cheering others on is special and I have so much respect for our older runners. We hope we can keep it up nearly as long as some of them. My favorite race was a half marathon in Townsend, Tennessee a few years ago. The scenery, the weather and the entire race was as perfect as I could ask for.”

Jackson had great experiences with trips and practices at Carson and a coach that is dedicated and loves to run with them. His favorite race is Winter Flight, a different challenge and the only 8K in Salisbury.

Travel to different places to run with his AAU/USATF teammates, including Florida, Alabama, Tennessee and even New Mexico, has been Connor’s best experience. Connor placed seventh nationally in Alabama and was chosen as All-American while his team took second nationally.
Mentioned quickly, but still important, was that Jackson made the effort to volunteer at a race. Mo

The only August race on the local calendar is the late night 2 Day 5K in China Grove. Look for it and other events at www.salisburyrowanrunners.org

Home gardeners who place the same plants in the same location each year will ultimately experience fungal and bacterial disease... read more