David Freeze: Changing winds make it one of hardest days yet 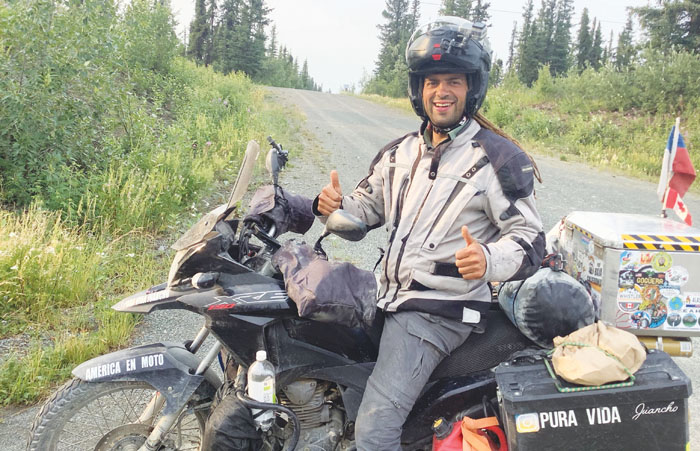 Juan Jerez from Costa Rica is on his own a yearlong journey. David Freeze/Salisbury Post

First thing, I took time at the Red Eagle Lodge to have breakfast, a light and nutritious one.

I never sit down to eat early in the morning or many other times except while I am writing the daily update. The food hit the spot as did my night in the settler’s cabin.

I knew that the ride to Glennallen should be OK with no other towns, but I did want to see some of the bigger mountains. The smoke obscured everything high up. The 45 miles to the visitors center went by fairly well, and I knew to load up at the adjacent convenience store.

Some young girls were doing a fundraiser selling multicolored Rice Krispie treats. Instead of asking me to buy, one of the girls just walked up and gave me one. She said, “I am supposed to sell these, but here. I hope you like it.”

In the visitors center, the attendant hit the nail on the head when I asked about lodging along my route and at the appropriate distance. She made a suggestion, and I called and booked a room.

With about 45 miles at the visitors center, I wanted to get about that much more.

Leaving Glennallen, I climbed gradually for about 12 miles. A storm developed and changed the moderate tailwind to a tough headwind. My pace was cut in half and often slowed to 5 to 6 mph.

The climbing continued, too, including some good ones near the end. This was one of the hardest days, but if it not for the wind change, it would have been only an average day.

Glad to have the day’s ride about done, two things happened. The community has a small grocery store, and I stopped to load my bags, never wanting to run out. I finally got my two egg and cheese biscuits for the day.

The second thing was really interesting. I had seen the same motorcycle rider at least a half dozen times over the course of the whole trip. I think I noticed him early back in Canada.

Juan Jerez passed me this afternoon just after I had bought groceries. He pulled over after waving, and we found out each other’s story. Juan is spending a year traveling, starting in San Jose, California, then up to Alaska and back down to Patagonia in South America. It was great to meet him. He is camping tonight close by.

Thursday (July 11) is still up in the air. I hope that the readers will get to meet a Salisbury connection but some variables remain. Two people have said that Thursday’s ride will be quite tough while another didn’t think it would be so bad. Either way, I got 91 miles today. 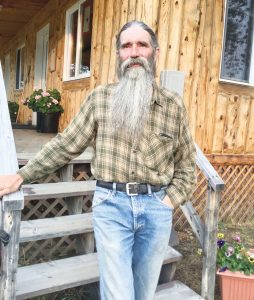 The host for the evening was Pete, the owner of the Nelchina Lodge. David Freeze/Salisbury Post

I am staying at the Nelchina Lodge and met Pete, the owner. He is quite an interesting guy and has done a great job with his health and is a fitness nut. We had a good bit to talk about, and I suspect we will have some more.

I love the lodge and will finish my report and try out the shower and bed.

Pete used to live in Minnesota, and I plan to send him the book covering when I traveled through Duluth and other parts of Minnesota. Pete grew up in the Duluth area.

Just two days of riding to get to Anchorage. Things are coming together. Looks like Amber, husband Jamie and myself will have a car for a few days. I certainly have some things that I want to do.

Thanks for joining in again. I hope to see you back for some more fun.

It is cooler now and the wind is blowing as I finish this, hoping that the direction is favorable for tomorrow and that the smoke clears out.