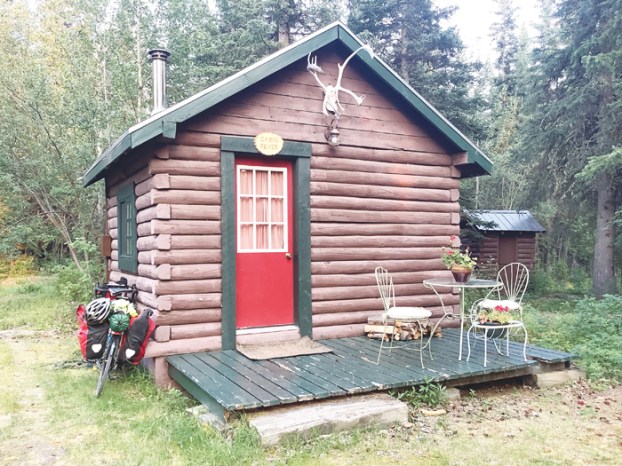 This is the 100-year-old restored cabin where Freeze slept at the Red Eagle Lodge. David Freeze/For the Salisbury Post

I don’t usually start from the end, but I am going to today (Tuesday, July 9).

After nights in the tent with the flaps falling apart, I explored the Red Eagle Lodge in Chistochina, Alaska. It took all day to get here, with some twists and turns that were unexpected. More about that later, but my bed tonight is in a restored 100-year-old settler’s cabin, and I am surrounded by more of them.

As restful as Monday afternoon (July 8) was, I plan to get another good night’s sleep in this old cabin.

I repacked my bags Monday night and did a lot to catch up on emails that have been hard to receive. In fact, most from the last month have still not been received.

The Three Bears Motel in Tok turned out wonderfully and had the best motel breakfast I have eaten.

Starting Tuesday morning, I had smoky air, flat roads and a 50,000-watt gospel radio station from North Pole, Alaska, to listen to. I love to hear local radio because it tells stuff about the community. Very few places in this area have any radio.

I saw a moose that was scared off by a camper vehicle. This one was bigger than the other two I saw about 10 days ago.

Next, I met Roman Durren, from Oberegg, Switzerland. We shared info on ground previously covered. Roman decided he was carrying too many things and that he probably was going to Vancouver. Several people have chastised me for sleeping in the woods, but Roman slept under a bridge last night.

Although there were plenty of mountains around us in the smoky haze, I could not see any details of the high ones. I hope the smoke clears some Wednesday (July 10), as some good ones are expected.

The roads remain mostly poor, but I did notice some movement toward better ones late today. In fact, I had an altercation with a paving crew that did not turn out well.

All day, for nearly all of my 84 miles, I waited for a small store called Posty’s. Yes, that was the only store for 84 miles. I was afraid it would close early, but that part worked out. I got some snacks for the night and the ride north tomorrow of about 50 more miles before I will see another store.

I am about to go explore the Red Eagle Lodge grounds. Bush planes actually land here. Two are here now. All of the cabins are original and different. Mine has a perfect wood stove, ceiling fan and screen window. “Experience real Alaska of the 1920s” is the sales pitch.

The price was good ,and I get breakfast in the morning — perfect since pickings will be thin later.

I have about 227 miles to go in three days. And there should be some downhill soon to get to sea level in Anchorage.

The weather somewhere nearby was 91 degrees today; at least that is what a customer said in a local store. And the days are getting shorter by six minutes here. This is how it makes such dramatic turns from total dark to near total light.

By Kirk Kovach For weeks now, the North Carolina budget has been in the air as both sides entrench further... read more