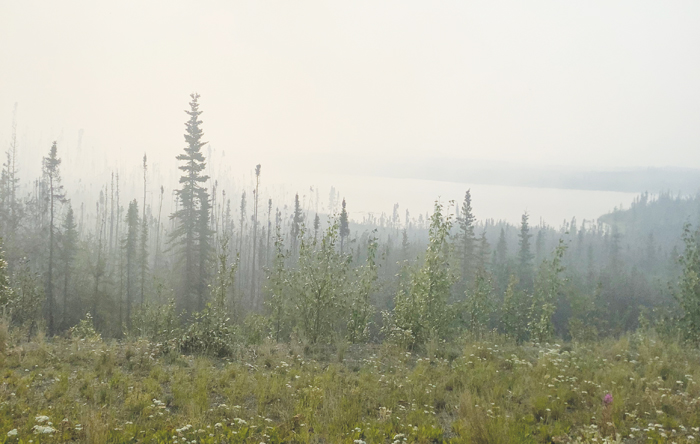 The woods on both sides of the Alaska Highway had extensive damage for as far as Freeze could see. Actual fires were burning occasionally on about five miles of road. David Freeze/For the Salisbury post

Once again, I spent the night in the woods on Saturday, July 6.

I had a campground picked out and, since I couldn’t call, I just pedaled there. The campground was right on Kluane Lake in Canada’s Yukon. It is one of the biggest with some of the most spectacular surroundings I had seen. There were high winds, too, which were blowing sand so hard that I could hardly keep the bike upright. But it didn’t matter. That part of the road was less than a mile.

I found the campground and also found two big “no vacancy” signs right at the top of the drive. Joe Troyer pulled his SUV and trailer in also without a reservation. Troyer eventually decided to take his family and check out another campground but not until we had a good talk and a few laughs about my long-distance bike ride.

I went to the woods nearby and set my stuff up out of sight. I was asleep quickly — so quickly that I couldn’t stay awake to get my story done. I decided to do it this morning (Sunday, July 7), but that didn’t happen either.

I was out and on the road with the wind getting up again early. I did not want a repeat of yesterday afternoon’s cyclone and hoped to get in some miles early. I was most excited about seeing Destruction Bay, which is mentioned a lot on TV. At least it used to be on “Ice Road Truckers.”

About 12 miles into the ride, I found Destruction Bay, so named because a storm destroyed most of the buildings here. The settlement started as a 100-mile relay station for truckers for rest and repairs. Most of the active town consists of a cafe, a convenience store and an attached motel. All looked first-class to me, and the free Wi-Fi worked to send pictures in a flash. The nice staff helped me get two fantastic egg, cheese and tomato sandwiches, too.

While there, another group of cyclists was getting ready to leave and hollered to get my attention. I paid them none since they wanted me to come to them. My road was north, and I took it.

The clerk said the terrain would not be bad, but it built in intensity until it was flat-out hard. I found myself riding along on the crest of the ridge.

Admittedly, the scenery was beautiful. But it was so hard that I was not making time and envisioned falling behind on finishing the arrival in Anchorage by July 12. Finally, about 3 p.m., the terrain softened, and I started to make time toward a better result.

Along the way, several interesting things happened. I rode through Burwash Landing, where I was told by two women that I could get supplies at the next available site. They must have forgot about the first-class facility at Destruction Bay. Burwash has nothing.

The second was that more two women pulled up beside me and said “Hi” and continued to drive slowly like they would stop again. They never did.

The best thing was that Joe Troyer and his family stopped me again just as the slow period was taking hold late this morning (Sunday, July 7). They were headed home to Anchorage but took time to offer me some food. We promised to keep in touch.

I also met Pierre and Alexandra Friday from Paris, France. Pierre, Alexandra and I talked about the road and the bears, almost always a favorite subject.

Then it was back to the pedaling. On and on it went.

I wanted to go for a big day now that things were rolling and get a campground or a cabin. About that time, two cars stopped to tell me that a forest fire was out of control nearby and the road was closed 20 miles ahead.

So for a day with 96 miles complete, I look forward to heading into Alaska and biking through my 49th state. It has been a hard journey to get here.