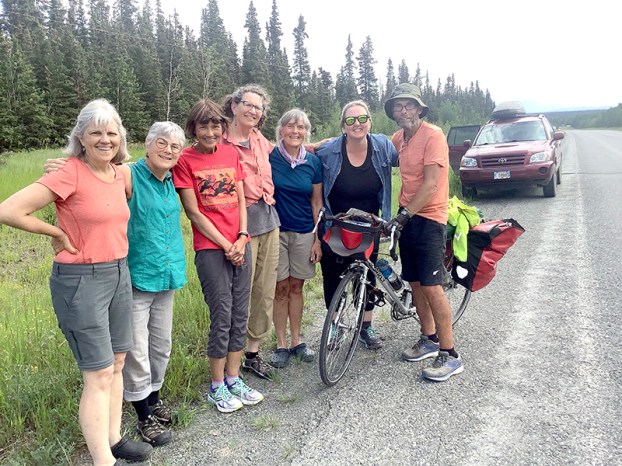 From left, Bec, Paula, Patti, Sharon, Angie and David Freeze pose for a photo on a Canadian roadside. These ladies stopped Freeze just outside of Haines Junction, Canada, and loaded him down with goodies and excellent conversation.

I like camping in the rain quite a bit, but I never cared for setting up the tent in the rain, especially a steady one.

It’s hard to keep the tent dry when only one person is setting it up, but it’s good to dive in soon after. After six years, the tent is starting to fall apart too.

I left a campground at the truck stop at Otter Falls, Canada, early and hoped for some more fast road. The fast part gradually went away, but the scenery looked better and better. The first thing that became dominant was the Kluane Mountain Range ice fields. They were spectacular as I headed toward them. Mount Kennedy and Mount Hubbard are two of the tallest.

Private and government campgrounds are mixed in along the roads, with the government ones being free but having fewer amenities.

Finally, I was in Haines Junction, Canada. I stopped at the same booming convenience store twice. Fresh sandwiches and baked goods were enticing. I asked three Indian women how far it was to the Alaska border. Two hundred miles was the quick answer. I submitted an update before leaving because I soon expected to lose connectivity.

The clerk told me that the first part of my journey after leaving the store would include some hard climbing. It would even out later. She hit it on the head. This was the worst early afternoon of the trip, as I pedaled a solid 4 to 5 mph for what seemed like two hours.

Just as all this climbing was about to start, Bev, Paula, Patti, Sherri, Sharon, Angie and Shirley stopped to wish me well and give me some snacks and water. What a lively and fun group. They wanted to feed me after, but I had to get back to work.

Anyway, the second- and third-highest peaks of the Alaska Highway both come virtually back-to-back in the afternoon. The wind blew up a virtual cyclone as a headwind. I could make little progress. One woman saw me struggling and wanted to help. It was so bad that two cyclists going the other way looked happy and content and they were pushed on by.

About to run out of water with a long way to go, I saw Bryan Troll from Philadelphia walking his dog for a potty break. Bryan was taking his niece to national parks and other attractions up the west coast over the summer. This was one of the best conversations of the whole trip. I told them all about the cycling experience. Bryan seemed to enjoy it.

Shortly afterward, he drove by me headed toward the Alaska border.

Next, I sent an email to a friend and asked her to gather her nearby prayer warriors and see if they could help me out of this hot, dry, hilly experience and see if God’s help was available. Within 20 minutes, I had a mostly 20-mile downhill ride, some spectacular scenery and, once off the ridge, a lot less wind.

I ended up making 73 miles for the day and headed to the woods for another night of camping.

Alaska is getting closer. I can’t wait to cross the border and see it. There is still much to do before and after that border.

The smoky haze in the area is getting worse. Sharp, clear and definitive pictures are harder to get.