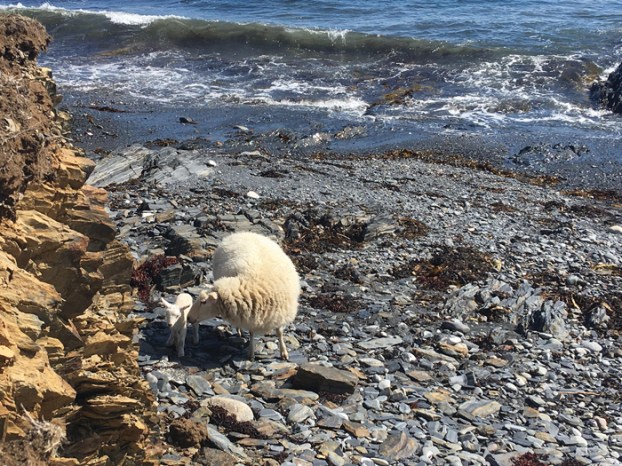 Submitted photo A ewe and her lamb on the coast of one of the islands off Nova Scotia, where sheep graze during the winter.

Recently, I went to Nova Scotia, Canada. During my time there, I met Captain Bill, who raises livestock in Lunenburg, Nova Scotia.

His family used to have a small dairy farm, but sold out a few years back. They now raise a small herd of beef cows and a large flock of sheep. While talking with him, I was intrigued by how farming practices are different on the peninsula than here in North Carolina.

With them being right on the ocean, I thought it would pose some problems, but they use the ocean to their advantage. There are hundreds of islands off the coast of Nova Scotia that they use.

The farmers take their sheep out to the islands during the winter months. The winter months of Lunenburg are a bit colder than we see in North Carolina. The temperature will range from 0 to -15 degrees Celsius, which correlates to 32 to 35 degrees Fahrenheit. This is why they raise sheep that are hardy and can withstand the cold temperatures and wind.

Captain Bill only raises Northern Country Cheviot, but he said other producers will run a cross of them with Scottish Blackface sheep.

During the summer months, the sheep spend their time grazing on pastures inland. When late fall/early winter rolls around, the sheep will be loaded up and carried out to the islands on barges. Breeding of the sheep will take place in late December.

During spring, all of the sheering, docking and castrating will take place on the island. Shearing of sheep is cutting the wool off of them. This does not harm them in any way. It is good for them so they do not get too hot during the summer months. The wool will then typically be taken to a carding mill to be spun or sold.

Docking is the removal of the sheep’s tail. Docking is a common practice used in Nova Scotia and in the United States. It reduces the risk of infections and matting of the wool.

Some producers will leave their sheep on the islands year-round and not bring them inland for the summer months. When fall hits, the farmers will go to the islands and get the rams and lambs that they are going to sell. They will leave replacement lambs they want to use for breeding purposes on the islands.

I was surprised that these sheep could survive on the islands all winter, but they have an abundant food supply that is not from the farmers. In the winter months, the farmers do not take any grain or hay to the islands. The sheep eat the kelp that washes up on the shores from storms. These islands also have a plentiful amount of grass and shrubs.

The kelp is a good source of dry matter. The kelp alone will provide roughly around 8% protein. This is a good feed source for maintenance purposes, but the sheep do not produce a lot of milk after lambing. Kelp also provides a plentiful amount of macronutrients that keep the sheep from becoming deficient in the winter months.

While talking with Captain Bill, I learned a lot of information about sheep production in Nova Scotia that I thought was really interesting. He said many do not believe that this practice works, but there are studies performed by veterinarians confirming that the kelp and life on the islands are very beneficial to the sheep.

It’s a cornucopia of corn

By Deirdre Parker Smith deirdre.smith@salisburypost.com Fresh corn is here now, and now is the time to cook it and enjoy... read more