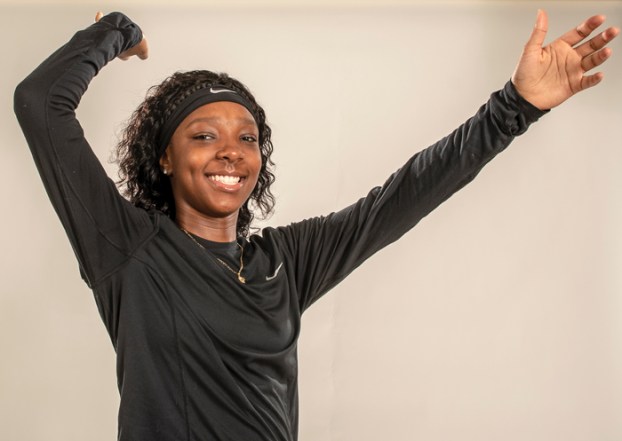 BERNADINE HERNANDEZ/SALISBURY POST ... South Rowan High School graduate Janiya Downs, who excelled in basketball, volleyball and track and field, repeats as Rowan County’s Female Athlete of the Year. She plans to continued her education and basketball career at Catawba College this fall. 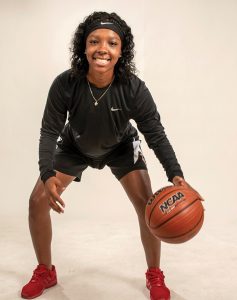 SALISBURY —  Janiya Downs, one of Rowan County’s best in the fall, winter and spring, made selecting the Female Athlete of the Year for the 2018-19 school year an easy job.

For the second straight year, Downs receives the Tracy Connor Award. That award is given in honor of the Salisbury-Rowan and Wake Forest University Hall of Famer who was one of the finest athletes and role models in county history. Like Connor, Downs is a South Rowan graduate.

“It’s pretty incredible to win it two years in a row,” Downs said. “I’m sure not many girls have been the athlete of the year twice. It’s an honor, an accomplishment I’m proud of.”

Downs is the first repeat female athlete of the year in the county since Connor was honored for the 1990-91 and 1991-92 school years. When Downs won last year, she became the first South winner since Taylor May in 2009.

Downs, who will be a freshman at Catawba College this fall,  is known mostly for basketball, a sport in which she shattered records. She was county player of the year or co-player of the year three straight times.

She got a lot less attention for it, but she also was one of the top five track and field performers in Rowan.

And even in a county in which Carson and West Rowan put two of the state’s strongest teams on the floor, Downs was one of the top six volleyball players.

The 5-foot-11 Downs’ school year began with volleyball. Along with Kira Rymer, Downs took the Raiders to new heights.

South (22-6) went 16-2 in the 2A Central Carolina Conference to tie for first place with perennial powers West Davidson and Ledford. It was South’s first-ever regular-season championship, and  the Raiders won a playoff game.

“Most girls who are as good as Janiya is at volleyball, volleyball is their thing, it’s what they do,” South coach Jenna Horne said. “But she came to the gym in August and played until October and helped lead our team. Her hitting numbers were phenomenal, some of the best in the county and our conference. She’s an amazing athlete.”

The last two seasons, Downs and Rymer have been co-captains and co-MVPs for South volleyball.

“I really liked volleyball more every year I played,” Downs said. “I’m not going to try to play at Catawba as a freshman, but I do want to try my sophomore year. I know I’ll have to work hard at it and practice more than I ever have, but I’m willing to do that. I hope that I haven’t played my last volleyball match.”

“As good as she is, she’s grounded and she’s humble,” Horne said. “She pushes herself and because she pushes herself so hard, she helps push her teammates to be better. We’ll still have a good team next season. We’ll still have Kira Rymer, Anna Rymer and several more good players, but we can’t replace Janiya. You can’t replace someone like that with one person. Everyone has to do more.”

Downs transitioned from the volleyball court to basketball. Basketball is her main thing, and she turned in one of the more amazing seasons in county history.

South was only 13-13, but that was actually a decent season with a new head coach and with four new starters on the court with Downs.

Downs was usually double-teamed and occasionally triple-teamed in CCC games, but she still averaged a county-record 32.3 points per game. She also averaged 12.5 rebounds, 4.2 steals and 1.6 blocks, while leading South in assists.

She scored 60 percent of South’s points, which is mind-boggling.

“Believe it or not, Janiya was underrated this season,” South coach Stacy Ellis said. “It was tough for her, constantly having multiple defenders on her, but she showed great character. She didn’t get frustrated. She led her young teammates and helped them get better. I consider myself lucky to have coached her for her senior season and I was fortunate to witness her record-breaking year.”

On Jan. 25, Downs had 52 points, 17 rebounds and 10 steals against a talented North Davidson squad and established a modern county scoring record for a single game. Her triple-double carried the Raiders to a 76-72 victory. She was recognized as the NCHSAA’s Female Athlete of the Week.

The game a week later, on Feb. 1, may have been even more remarkable. Downs broke her own scoring record with 53 points, but South lost 61-60 to West Davidson.

Downs scored 42 against West Rowan. She had 43 of South’s 53 in a loss to Ledford. She scored 40 and 42 in wins against Lexington and Central Davidson.

In the first round of the state playoffs, in the final game of her career, she poured in 44 against R-S Central.

“It was a big challenge this season because we lost so many good players and lost so much of our scoring and rebounding,” Downs said. “I knew I would have to do as much as I could, and my teammates gave me everything they had. I know we didn’t have as good a season as we wanted to have, but we did OK. There were a lot of games where we couldn’t have played any harder.”

Downs finished her four-year varsity career with 2,371 points. That ranks second in county history to Fields’ 2,783.

Downs received major post-season accolades including All-State by the Associated Press. She was one of only three unanimous picks in statewide balloting by sportswriters.

She still has one high school basketball game in her future as she’ll play in the East-West All-Star Game in Greensboro on July 15.

After an emotionally and physically draining basketball season, Downs continued to excel in spring sports in track and field.

She competed as both a sprinter and a jumper. In most meets, her four events were the long jump, the high jump, the 200 meters and the 4×100 relay.

“I knew it would be my last year of track, so I was determined to give it my all,” Downs said. “I put in more time on the jumps than I ever had. In the high jump, I really wanted to get past 5 feet, but it was hard. I did work at it. A lot of times I was the last one to leave practice.”

In the Rowan County Championships, Downs was named MVP for field events. She won the long jump and high jump, sprinted the anchor leg for South’s first-place 4×100 team and was second to Carson’s Mikaila Gadson  in the 200. Downs and distance runner Madison Lowery paced South to a second-place team finish behind Carson.

In the Central Carolina Conference Championships, South’s team was runner-up to Ledford. That league has 10 teams and more than half of them are good in track and field.

Downs was instrumental in South’s strong showing. She won the long jump, took second in the high jump, placed fourth in the 200 and helped the Raiders finish second in the 4×100.

“We always asked Janiya to do two jumps and two sprints, and that’s a lot, a very tough day,” South coach Rebekah Julian said. “But she always came up big. She scored huge points for us in the conference and in the county. She carried us at times this season and was definitely a leader for us. Every event she attempted in practice, it was like, ‘Oh gosh, I’m pretty good in this, too.’ She ran some really good times and she had some really good marks, but she never acted like she was anything special. She gave us everything she had.”

Downs’ strongest event is the long jump, but she didn’t qualify for state competition in that event in the 2A Midwest Regional held at Surry Central.

“It was pouring rain,” Downs said. “And I was going back and forth from the long jump to the high jump. I really thought I was going to make state (the top four in each regional advance to state competition), in both events, but two girls passed me in the long jump on their last jump.”

Downs did manage to finish third in the regional high jump, so she was able to conclude her track career at the state level.

“I think her heart was mostly in the long jump, but she made it in the high jump instead,” Julian said. “Sometimes, that’s just how things work out,”

Downs tied for 11th in the 2A State Championships in Greensboro, not the finish she’d dreamed about, but she gave it her all one last time in a South uniform.