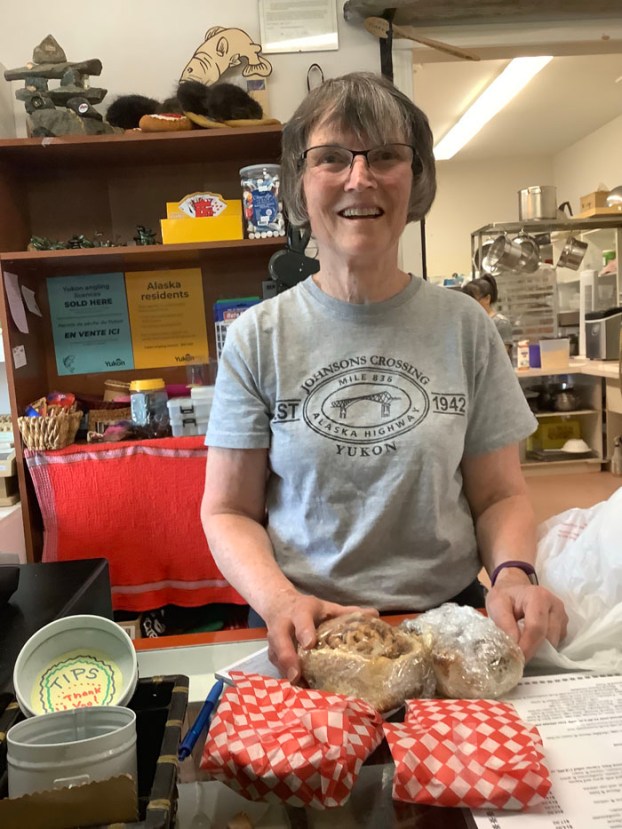 Jane Clyde turned out the best one I have seen and probably tasted. David Freeze/For the Salisbury Post

So many good things happened in Teslin, Canada, last night (Tuesday, July 2), and the best of them was some solid sleep.

That’s except for one instance at about 2 a.m., when there was a huge crash outside and it quieted down quickly. All my bags were sorted and repacked, ready to go chase 110 to 115 miles on Wednesday. But I only made 99 miles, and there are a few reasons for the shortfall.

I left at 6 a.m. Pedaling along Teslin Lake for 32 miles was pleasant and peaceful, with almost no traffic. None of the stores or motels seemed open, including a truck stop, which was surprising.

I bought a couple of huge cinnamon buns, a couple of cookies and pastries. Then I asked for an egg and cheese biscuit. Jane Clyde turned out the best one I have seen and probably tasted. It was huge. My point here is that my pedaling got derailed because of eating.

Back on the road, I had to climb so high to get out of the river basin that I briefly got a cellphone signal with Verizon. There was nothing all day from AT&T, which was rather disappointing. On the climb out, I met Bill Brooks of Sidney, British Columbia, who briefly stopped to talk on his way to Vancouver.

Not long afterward, I had a first for my cycling experiences. Yusuke Yamamaka, of Japan, had just stopped and told me he was heading to Argentina. Then another rider joined him. We were all amazed to discover that Tom De Wilde of Belgium was also going to Argentina. They seemed to be bonding as I pedaled away.

My pace had slowed some from what I had hoped, and I vowed not to get behind on getting my updates and photos ready. I was still sitting here typing away at almost midnight with enough light to see.

I ended up in a Good Sam campground called Caribou RV Park about 11 miles short of the town of Whitehorse. I found a reasonable motel on Siri’s list of close-by accommodations, but it turned out to be miles away. My phone told me the distance got down to a half mile and then it wouldn’t get closer as I kept pedaling. I asked a neighbor, who cleared up the confusion.

I ended up in a great campground with fewer mosquitoes.

More miles are coming up (Thursday, July 4), which will include passing through the town of Whitehorse. I have no idea about the destination for the day, but according to the “Milepost” guide, there are 735 miles to go to Anchorage in nine days. That should be doable.

In regards to the removal of the statue “Fame,” maybe we should consider the words of Union officer in the... read more