David Freeze: Alaska trip is toughest yet on bike 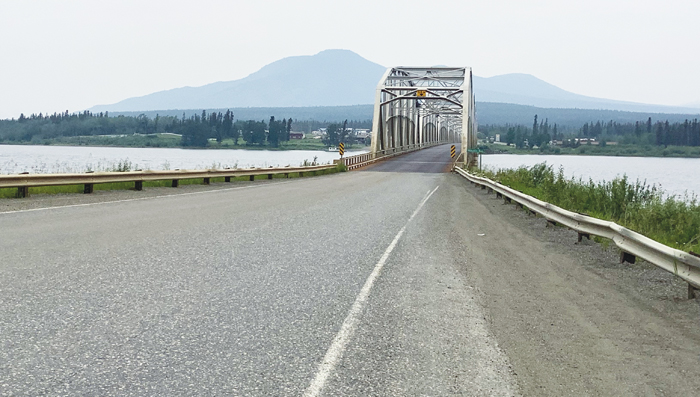 I slept in the woods near the Alaska Highway last night (Monday, July 1).

I slept good but was blasted by a swarm of mosquitoes again Tuesday morning. They were everywhere, and the crowd got bigger quickly. My mosquito net made a big contribution, keeping my legs covered, and the net on a my face made things more equal.

In another slow-to-develop day, I had to keep driving through the many places where road work is ongoing. This time, crews were spreading water on one of the roads. The practice of having trucks with all those wheels gorging volumes of choking dust has to be a huge health hazard to anyone exposed to it. I know all the cyclists are passing through it daily. Today, there were four different areas of road construction in the 63 miles I rode.

I was headed for the community of Teslin, Canada, and it was hard to get a handle on it before I saw it. People said it is a real town. What I saw is more like three motels, a restaurant, a grocery store and maybe a a couple of more buildings sitting on a huge body of water with a long and beautiful bridge.

The Alaska Highway crossed back and forth between Yukon and British Columbia seven times. There was nothing unusual or specific about the scenery except I passed through some places that have had recent fires. Smoke has been lingering in the air for about five days.

I have been pretty tired lately and easily could have fallen asleep on the bike, if you can believe it. My plan was to stop in Teslin, get a motel room, of which there seemed plenty, and catch up before going to bed early and trying for something incredible  on Wednesday (July 3).

Here is what happened. The two bigger motels were full, but a third smaller one had a room available. I worked out with Doug Martens to get a room not in use. It had all I needed. I got it for $40, when the other two motels wanted $120.

My plan is this: I did 111 miles the other day, and Wednesday calls for 113 miles. Doug says the route isn’t too bad. Plus, there are at least two food stops and maybe more. So I am going for it.

If it doesn’t t get done, I will just stop and camp and probably meet some new mosquitoes. My bigger worry right now is that I can’t contact motels or even see where they are.

Speaking of that kind of thing, here are some new thoughts on the journey so far: I am not that far from heading into Alaska. My cellphone still has no service, and Whitehorse, with about 25,000 people, is the biggest town around. If the phone doesn’t work there, my connections are going to be harder to make.

The road in the last few days has not only seen plenty of repair ongoing but some huge potholes. I have to keep my eyes open and not miss one that could damage the bike.

My legs are eaten up, too. I may have to break down and get some kind of spray. They itch and burn all the time. Throwing up the tent and diving in with all I think I need is not the best way to go camping, nor is packing up with those biters harassing me.

If I was looking for a challenge, I think this has developed into the biggest one yet on the bike. Not a day goes by with an easy ride, and I dread the day that a big wind pushes back real hard or it pours rain all day.

Imagine a morning when you start down the road, headed off to a new town, and you see wet bear tracks across the road. Or there’s the three times that I have come down to little or no water at the end of a ride. Or when you’ve been surviving on Pop Tarts when a big-calorie diet is called for.

Sometimes Andy Mooney of the Post and I talk for a while about the name of my book that is coming up.

I’m just taking time to repack my bags, get my first shower in six days and then get some sleep. I’m saying my prayers. Please do so, too.

And happy birthday to my daughter Ashley on July 5!