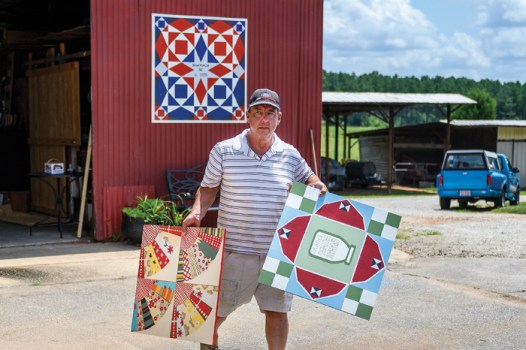 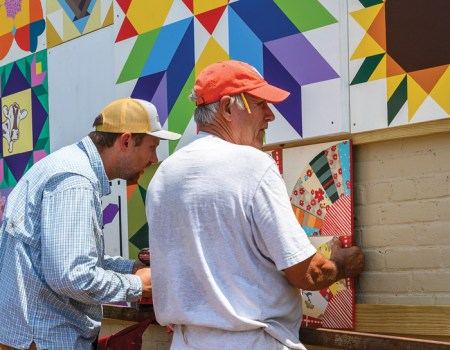 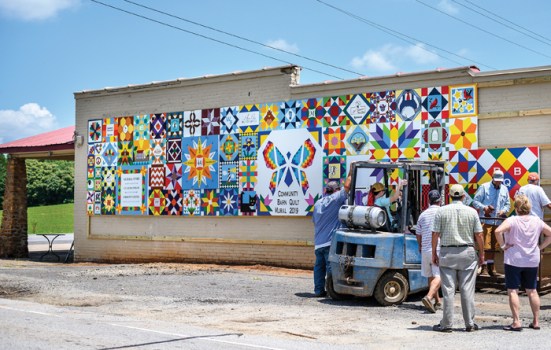 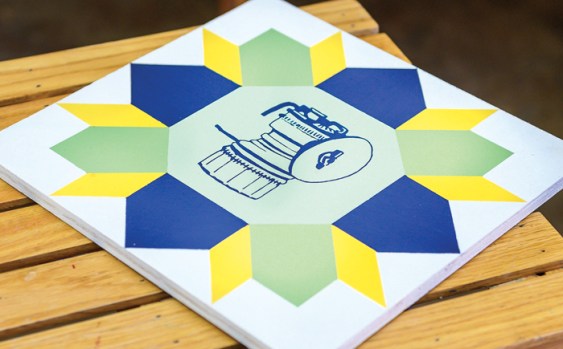 Ashley Bennett made a barn quilt square with a coal miner's lantern in remembrance of her grandfather. Bernadine Hernandez/Salisbury Post 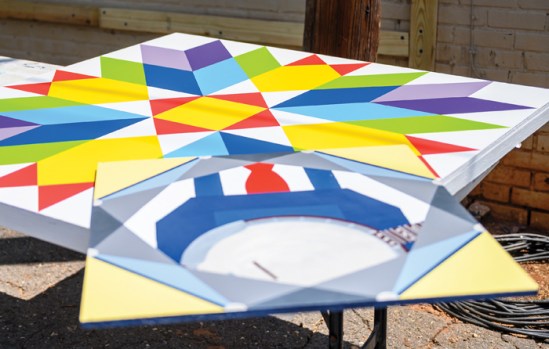 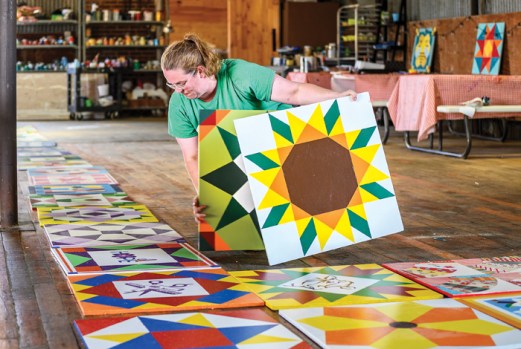 Elsie Bennett picks out some of the barn quilt squares that will go up next at West Rowan Farm, Home & Garden in Bear Poplar. Bernadine Hernandez/Salisbury Post 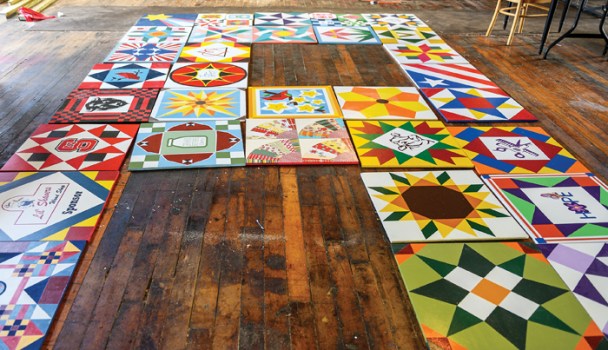 BEAR POPLAR — When you think about it, the Community Barn Quilt Mural is just what a quilt should be — individual squares stitched together into a blanket of warmth and nostalgia.

Over the past six-plus months, more than 100 people are thought to have combined to produce this piece of art, installed Monday on the Graham Road side of West Rowan Farm, Home & Garden.

As it was going up, the quilt’s mastermind, Elsie Bennett, and its chief promoter, Adele Goodman, figured Rowan County now has the largest community barn quilt mural in the country.

Bennett’s online research and queries identified several other places with community barn quilts — with the emphasis on “community” — but it looks as though this 500-square-foot mural on the side of her store is larger than a 480-square-foot quilt mural in Ashland, Kansas.

“We beat Kansas,” said Goodman, who has been instrumental in forming the Rowan Barn Quilt Alliance. In recent years, the group has fostered an explosion of barn quilts in the county.

Bennett and Goodman stressed the Bear Poplar mural is not the largest individual barn quilt square in the country. That honor apparently goes to a 24-by-24-foot square in Kansas.

By comparison, the largest barn quilt squares in Rowan County are half that size, though Bennett plans to do a 16-foot square for Carolina Malt House in Cleveland.

Here are some of the numbers behind the barn quilt mural at West Rowan Farm, Home & Garden, located at N.C. 801 and Graham Road:

• It has 92 2-by-2-foot squares, created mostly by individuals, families and organizations, along with more than 20 1-by-1-foot squares.

• It also has four 4-by-4-foot squares, which include a handsome geometric pattern; a billboard for the general store of Elsie and Brian Bennett; a representation for how many miles the store and Bear Poplar are from outlying cities and regions; and the logo of the Rowan Barn Quilt Trail Alliance.

• The main rectangular part of the mural covers 460 square feet. An upper row of squares near the roofline constitutes an additional 40 square feet and were the extra square footage needed to surpass the mural in Kansas.

The farming-related symbols on the mural are numerous. You can easily spot, for example, a barn, chicken, cow, horse and Graham’s Dairy milk bottles.

Some squares are devoted to things such as breast cancer awareness, multiple sclerosis, Faithful Friends Animal Sanctuary and adoption awareness.

Other squares are tributes to people living and dead.

Animator Tony Craig contributed a square. He also writes for American Road magazine and visited the store Monday afternoon during the mural’s installation.

“It’s hard to figure out which one is my favorite,” Elsie Bennett said of the squares.

When she thinks about all the people involved in the mural, all the new neighbors she got to know and all the things the mural represents, she gets emotional.

Take musician John Goodson. He was part of the Gospel Plow Boys, a group that often plays during Sunday night socials at the store.

During the mural’s coming together, Goodson died, and Bennett honored him on the mural with square featuring a banjo.

Elsie’s father-in-law, Roy James Bennett, passed away about four-and-a-half years ago. A former coal miner, he is represented by a miner’s lantern square painted by Elsie and Brian Bennett’s daughter, Ashley.

On the back of most every square, Elsie asked the creators to write what the square symbolizes to them. She had a photographer document each one before they were installed.

When Ashley started to read her own words again Monday about her “Papaw,” the tears came quickly. 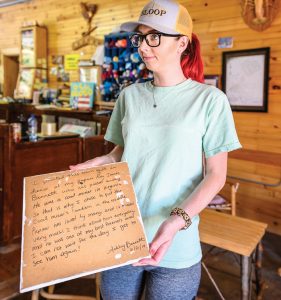 Ashley Bennett holds a barn quilt square she made in remembrance of her Papaw with a note about it written on the back. Bernadine Hernandez/Salisbury Post

Elsie Bennett says it’s like that with many of the squares.

“A lot of them have very heartfelt stories,” she said.

Goodman works for the Penske NASCAR race team in Mooresville that includes driver Ryan Blaney, who has become a resident in these parts. So Blaney has a wheel-pattern quilt square, which he autographed.

“It’s kind of a welcome to the community,” Goodman said.

An artist herself, Goodman contributed to the mural like many others.

“Me and my mom did that one,” she said Monday, watching one of the squares being sent up to Ryan Sloop and John Owen, who were handling the hot-and-humid installation from the front end of a forklift.

Bennett said the community barn quilt brought many families together. They usually met in her warehouse to design and paint squares.

Bennett found herself involved in most of the squares, offering guidance and her artistic talent. “Some are just done for pretty,” Bennett said of many patterns.

Important sponsors for her project were Lil’ Shaver’s Wood Shop for the extensive number of boards (rails) on which the individual quilt squares were mounted; Sherwin Williams for the paint; and Sloop Fence Co. for the installation.

Each has a quilt square on the mural.

The installation process started about 9 a.m. Monday A lot of preliminary work happened over the weekend. On Saturday, Bennett and Goodman laid out all the squares in the warehouse as they wanted them to appear on the store’s outside wall.

They tried as much as possible to have the colors and shapes complement each other as they transitioned from one to the other.

Much of Saturday also was devoted to putting up the boards to which the squares would be attached by wood screws on Monday.

What’s on the horizon in the world of barn quilts?

Inside the store will be a guest register for the mural. Within a couple of weeks, visitors will be able to secure a barn quilt brochure and map, which they can use for a self-guided tour through the countryside to see other quilts.

Bennett has tentatively planned a “Barn Quilt Festival” at the couple’s store on Sept. 21.