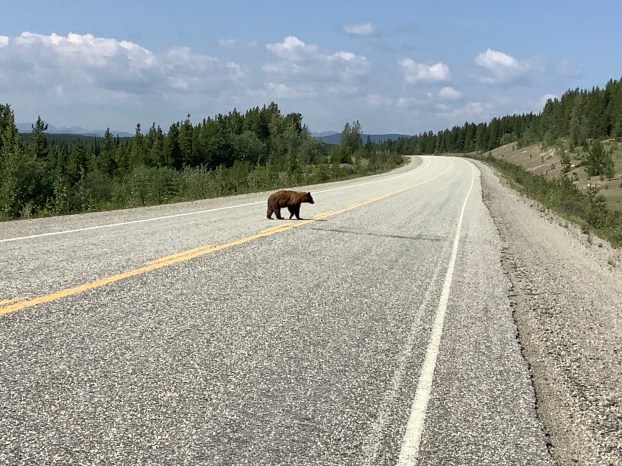 Freeze saw his first grizzly, almost too close. Something caused the bear to run after Freeze.

So many things were happening Tuesday morning (July 2).

I needed to check my messages and also needed to submit my photos and story before leaving. I had been told to not expect to get online until late in the day. Plus, I wanted to see if somebody from the truck stop would talk to me about what to expect headed north.

I have a copy of “Milepost,” which describes what can be found along the road mile by mile. So I quickly looked through the current section. I found only one place where I was sure to get water.

A man named Bob was the grill cook Monday night when I got to the Nugget Truck Stop. He never did say much. I couldn’t get free water. I couldn’t have Wi-Fi, and everything cost a lot. Plus, there were only sleeping rooms.

I found out there were no food stops and maybe two stops for water. Bob told me to just turn left and keep riding. I bought more snacks, fruit and pastries and started riding north.

I immediately began to climb and kept doing that over and over, just a few miles apart sometimes. Only once did the pace go well. The rest of the morning, I just couldn’t get going.

A little into afternoon, I came off a big climb and noticed my first grizzly beside the road. It was about to walk out in the road, but it turned back just in time to keep from getting run over.

When the grizzly walked across the road, I took a picture. Then it started walking toward me. I put away my iPad and started pedaling away on the flat ground.

Just about then, a woman in a truck stopped and pointed back. The bear was running after me and another truck was stopping. I just kept pedaling and didn’t look back anymore.

I have now seen a grizzly. The two that Juergen, the veterinarian I previously met, encountered were aggressive. It seems they know they can be, although we don’t hear about this nature.

The first water stop Bob suggested had a pump, but no water would come out. I looked in “Milepost” and found one for the next day.

I didn’t have enough water to finish the day, much less for the nighttime hours. I asked Jeannie and Lee Kanter, of Ortonville, Minnesota, and they filled all my empty bottles, even giving me another one.

It was a nice meeting, and I hope to hear from them again.

Then almost right away, Thomas Lesperrier and Lise Faron, of Paris, met me as they headed south. They had experienced some of the road repair that I had when the dust was so bad. We all had it for about a 10-mile stretch, along with several shorter ones.

My diet has been pastry-heavy the last couple of days, but all is off to a good start. With just 11 days left in this section of travel, I think the towns and food stops will get more frequent, which suits me.

I plan to get a motel in the community of Teslin, Yukon, Canada, on Wednesday night. No real shower for me is crazy after six straight days. I am ready.

I completed 86 miles Tuesday and also had my second flat tire just before I planned to quit. It was a front tire this time, which is always my favorite because they are quicker to fix.

I planned to camp and set up among another storm of mosquitoes.

Some of you have emailed, and I haven’t answered you. I cannot send on ctc.net email until I’m out of Canada and, possibly, Alaska too. So, use runner.david.freeze@gmail.com and I will answer you.

Another day has come to an end. We have 11 days to get to Anchorage. Let’s go do it!